In the last post, we studied some early rifled firearms, including the Baker rifle. These rifles were all of the muzzle-loading type and used flintlock firing mechanisms. The invention of the percussion lock in the early 1800s made the firing mechanism much more reliable than the old flintlock system. The growing popularity of the percussion lock finally caught the eye of George Lovell, an employee of Enfield rifles, who was experimenting with ignition mechanisms, and also trying to improve the accuracy of rifles. The first model prototype of the Brunswick rifle had a percussion lock, with eleven rifling grooves in the barrel instead of the usual seven of the Baker rifle. The metal parts were all blued or case-hardened so as to not shine and give the user's position away. The rifle also had a fixed rear sight for 200 yards with a folding leaf for ranges beyond 300 yards.
This rifle was experimental and still not named the Brunswick rifle yet. Mr. Lovell submitted it to an evaluation competition for the rifle brigade in 1836. Meanwhile, another competing rifle was submitted by a Mr. Seabright, who was acting on behalf of the Duke of Brunswick. This rifle was invented by one Captain Berners, who was then serving as a Field Adjunant under the Duke of Brunswick's forces. This rifle had two very wide grooves which made a complete turn inside the barrel. The rifle was complemented by a bullet shaped like a ball with a straight belt running around its surface. Such a bullet was called a "belted-ball". 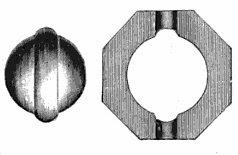 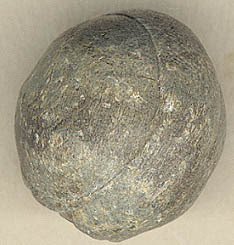 The idea of using a ball with a belt around it was not new. There was a Spanish rifle from 1725 that used the same idea. Nevertheless, the committee found some objections to the Brunswick submitted entry, mainly that a cartridge could not be used with this rifle, it had complicated sights and weighed more (almost 11 lbs.) than other competing weapons. It was also harder to load than the competition, due to the problem of aligning the ball's groove to the barrel. However, it was noted that this rifle shot as well than the competition at short ranges and shot much more accurately than everything else at long ranges. It also required less cleaning than its rivals and suffered less wear and tear than the grooved rifles at that point.
The decision was made in 1837, to use the general Enfield rifle design (for its lightness, less complicated sights, easier to handle, percussion lock and no shiny parts) but to change it from using its eleven groove barrel and use the belted ball and groove design from the Duke of Brunswick's rifle entry, which had much better accuracy. The new weapon was to be called the Brunswick rifle as well, even though most of its parts were from the Enfield design. The job of designing the new weapon also fell onto Mr. Lovell and the Enfield company.
The new entry submitted by Mr. Lovell in late 1837 also removed a few of the objections of the committee from the previous competition. This rifle now weighed only 9 lbs. and also had two semicircular notches at the end of the barrel, which made aligning the bullet while loading much more easier. The image below shows the end of the barrel with the new design. 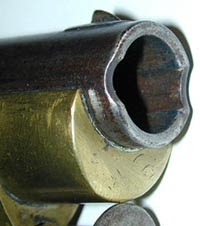 The resulting rifle also had a longer bayonet than the older Baker rifle and also moved the bayonet attachment bar slightly back from the front-end of the rifle, so that when the bayonet was attached, the bayonet guard was not in front of the barrel -- a fault of the older Baker rifle.
The first order of 1000 rifles was given in October 1837 and it became quickly apparent that 600 of these rifles were urgently required by the Rifle brigade and that Enfield would not be able to complete these in the time required. Hence, the manufacture of the first batch of these rifles was outsourced to many gunmakers in and around London, many of whom were in the process of completing their final orders of Baker flintlocks for the British army!

Public domain image courtesy of wikipedia.com
Troops were issued with two kinds of ammunition for this rifle. One was a loose ball with a greased calico patch cloth and a separate blank paper cartridge that contained a pre-measured charge of gunpowder. This type produced the best effect in terms of accuracy. The other type consisted of a greased paper cartridge that contained the belted-ball and the pre-measured gunpowder charge all in one packet. This type was intended for rapid firing. Troops could also use the older paper-cartridges with the round ball and ammunition in case of an emergency.
Mr. Lovell had brought into production 3 new weapons: a carbine, a smoothbore musket and a rifle. The carbine was named the Victoria carbine in honor of Queen Victoria and the musket was named the Lovell Pattern musket. Mr. Lovell wrote to the board requesting that the rifle be named after him as the "Lovell Two-Groove Pattern Rifle", but the board refused him saying that his rifle was a modification of the Duke of Brunswick's rifling design and hence should be called "Lovell's Improved Brunswick Rifle". This later began to be popularly called the "Brunswick Rifle" for short, even though George Lovell had more to do with the overall design!
Like the earlier Baker rifle (and its direct ancestor, the German Jaeger rifle), this rifle also had a patch box on the side of the stock which contained cleaning tools and greased patches. The original design by Mr. Lovell was simply a box to contain patches, an improvement by one Major Boileau led to the following design: 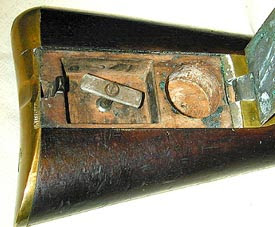 In the above design, the patch box is divided into two sections. The left section has a screw in the middle of it with a large T-shaped head. This section is used to store small cleaning tools and brushes and the T head prevents them from accidentally falling out when the patch box is opened. The right section is circular-shaped and used to store greased calico cloth patches and a small rag to wipe the barrel.
In 1841, a second version of this rifle was issued. This rifle had some minor changes done to the percussion lock design. The bayonet attachment bar was also changed from having a hook design at the end, to a more centrally located notch, as can be seen in the figure below. 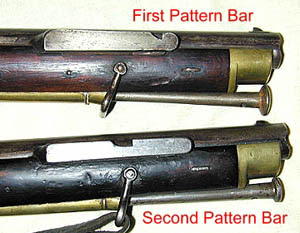 A third version of the rifle made in 1848 further improved the lock design to a lighter side-lock and made more changes to the bayonet catch.
By 1850, new ideas were coming into rifle design, including a design using a new expanding bullet called the Minie ball, and hence weapons like the Brunswick rifle were becoming outdated. However a new batch of 4000 Brunswick rifles were ordered with the understanding that this would be the last batch to be manufactured for the British troops. After 1853, British troops started to replace their Brunswick rifles with the newer breech-loading Enfields using the Minie ball.
Nevertheless, Brunswick rifles continued to be used in other parts of the British Empire for many years to come. In fact, the manufacturing line was reopened in the 1860s specifically for use by soldiers in India. The picture below illustrates a Brunswick rifle used by the Sikh regiment. 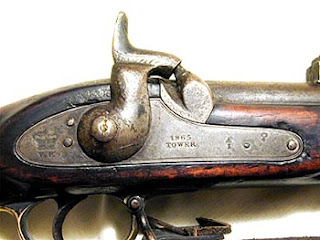 As can be seen from the picture above, there is a marking "1865 Tower" on the lock plate. This indicates that this particular rifle was manufactured in 1865. The word "Tower" indicates that the rifle meets the specification standards of the British armory (i.e. the so-called "Tower" proof mark -- the Royal Armory that enforced these standards was located in the Tower of London) Also interesting is that the rifle has an additional marking that consists of the letter I with an arrow above it. This marking indicates that the rifle was manufactured for use in India. Additional markings to indicate that this was used by the Sikh regiment are found in the butt-plate at the end of the rifle butt.
Posted by The Editor at 7:59 PM