The next method of metal treatment we will study is called plating. There are two forms of plating: electroplating and electroless plating.
The general technique behind electroplating is to take the part to be plated and connect it to the negative terminal (cathode) of a DC current power source. The metal that forms the coating is connected to the positive terminal (anode) of the power source. Both are placed in a electrolyte solution that contains one or more dissolved metal salts that permit the flow of electricity. Metal from the positive terminal end (the anode) dissolves in the electrolyte and then deposits on the metal connected to the negative terminal (the cathode). In some cases, the anode is not consumed by the process, but instead, the metal salts dissolved in the electrolyte are deposited on the cathode. When electroplating, the cathode is generally placed in the middle between two anodes, so that the deposits are made evenly on both sides of the part.
The oldest type of electroplating used for gun parts is nickel plating, which is at least 125-150 years old. It was originally used as a plating over steel to protect it from corrosion. Nickel plating works very well on surfaces that are highly pitted, by sealing off the pores and preventing further rusting. Parts that have been nickel plated have a slight yellowish tinge to them. The nickel coat does about 45 HRC on the Rockwell Hardness scale, which is about the same hardness as the tip of an axe or a chisel. When nickel plating, the anode used is a non-consumable one and the plating occurs from the dissolved nickel salts in the electrolyte. Nickel plated guns were once very popular in the Wild West because they don't rust as easily as guns treated with bluing. Also, wiping them down at the end of the day is a lot easier with a nickel plated gun because it provides a smoother finish than a gun with bluing.
Another form of nickel plating is called Electroless Nickel Plating which came into vogue in the 1950s. Instead of using electricity to deposit the metal, the reaction is auto-catalytic and deposits a layer of nickel-phosphorus on the surface of the metal. The part is first prepared by adding a pre-plating catalyst to the surface, before dipping it in the solution, which causes the dissolved metal in the solution to deposit on the part. It has the advantage of being able to be used on oddly shaped surfaces, as well as non-conducting and non-metallic materials, such as certain plastics. It provides a very uniform thickness coat. The hardness of this is about 48-50 HRC. One particular type of electroless nickel treatment is called NP3, by Robar Corporation. This type combines nickel with teflon to provide less friction between the coated parts.
Some examples of nickel plated firearms are shown below. Note that the finish of the nickel plating can be adjusted to be bright and shiny or matte finish to reduce glare. 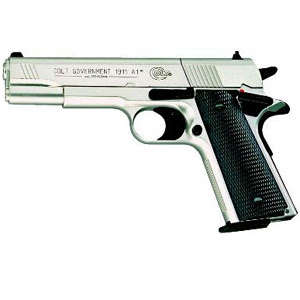 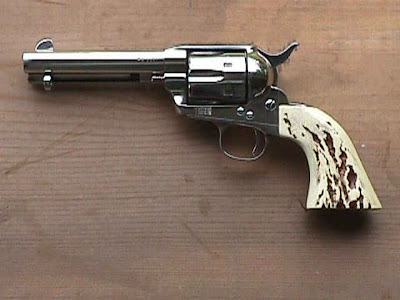 Another form of plating, which is very commonly used these days, is Hard Chrome Plating. This method was invented in the 1920s and perfected in the 1940-1950s. In ordinary chrome plating which is used for decorative purposes, the coating is very thin and beautiful, whereas hard chrome plating is not as beautiful, but is a much thicker surface. Hard Chrome Plating is also called Engineering Chrome Plating, as it is very much used in surfaces that need a good corrosion resistance as well as lubrication. This type of plating is much harder than nickel plating. It rates between 65-70 HRC on the Rockwell Hardness scale, which puts it harder than high-quality steel alloys such as custom knife edges. They can also show superior resistance to rusting in punishing environments such as salt spray. Chrome plated firearms generally come in bright or matte finishes. 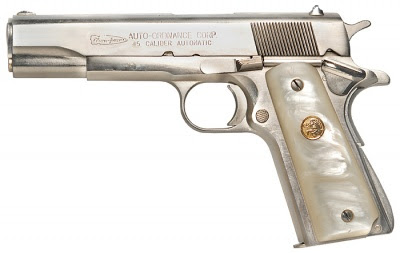 There is also another type of finish called Black Chrome Plating, where the steel firearm is initially nickel plated, and then chrome plated on top of the nickel plating. It is a softer finish than hard chrome plating, but looks more beautiful in some people's eyes.
Other forms of plating include gold plating and silver plating, but these are generally done in the interests of looks rather than protection from wear and tear. 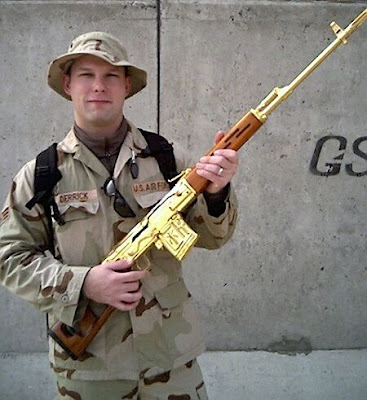 The above two gold-plated weapons were originally owned by former Iraqi dictator, Saddam Hussein.
Generally, the following processes are used when plating a weapon:
Care must be taken that the plating does not add to much to the thickness of the weapon, especially a very close fitting one.
All types of plating are generally superior to bluing or parkerizing. Nickel plating is cheapest can be applied to various surfaces (even non metallic ones), but does not provide as durable a finish as Hard Chrome plating. Electroless nickel plating is a bit more expensive, but it provides the best corrosion protection because it is less porous than nickel plating or hard chrome plating. However, it is less durable than hard chrome plating. Overall, hard chrome plating provides the best combination of hardness, protection against corrosion and durability of all the different plating types.
Posted by The Editor at 11:05 PM