Fixed sights are the first types of sights ever invented. Back in the early days of firearms, the range of weapons wasn't as much and many weapons weren't rifled either. Hence, there was not as much reason for people to have adjustable sights to adjust for elevation or windage. If a person desired to shoot at a target at a greater range, he would merely aim a bit higher, based on personal experience with the weapon.

In the early days, machining and metallurgical techniques weren't as good as today. In many cases, people simply didn't trust adjustable sights for weapons intended for rough use, because they were thought too delicate and more expensive to produce. For instance, most revolvers from the wild west used fixed sights, whereas some rifles of the same period featured adjustable sights.

In some cases, the sights were actually part of the weapon, not separate pieces. For example, on many Colt and Smith & Wesson service revolvers, the front sight was machined from the barrel's original steel blank and the rear sight was merely a groove cut into the top strap of the pistol frame. In some weapons, such as the colt paterson revolver, there was no separate rear sight and instead, when the user pulled back the hammer, there was a notch cut into it which would serve as a rear sight. Hence, weapons like these had no way to adjust the sights at all. 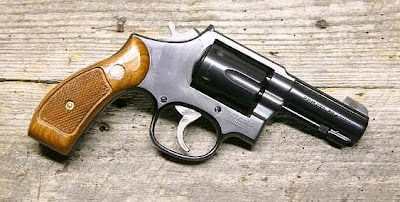 While we say "fixed sight", it is not entirely true that these sights are fixed. Many an enterprising owner has adjusted such sights by using crude tools such as a hammer or a file. For instance, if a revolver shoots too much to the right, the user may choose to permanently bend the front sight a bit to the right using a hammer. If the weapon shoots a bit too low, the user may file off the top part of the front sight a bit. This is why some weapons may have slightly deformed sights. This is not always due to wear and tear, but may be in that state because the previous owner took some trouble to adjust the sights to his personal preferences.

These days, many short range weapons such as auto pistols or revolvers, still come with fixed sights. For example, many models of pistols from manufacturers such as Glock, Smith & Wesson, Ruger, Colt etc. feature fixed sights. 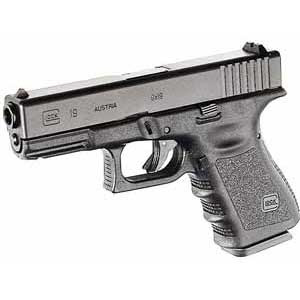 In some cases, the sights are not entirely fixed. For example, many modern pistols come with the sights fitted on to dovetail joints. Such sights may be adjusted with special tools. Once the sights are adjusted so that the weapon is satisfactorily zeroed in, they are then left alone and are not adjusted by the user again in the field. So these sights could be called "semi-fixed" sights.
Posted by The Editor at 9:56 PM