Continuing our series on utility firearms (i.e.) firearms not designed to take human life. We will discuss the use of shotguns in the field of geology and geological engineering in this post.

There is a physical principle called "seismic refraction". Basically, when seismic waves travel through the ground, the waves move at different velocities depending upon the various different layers of soil or rock. Also, the waves get refracted (i.e. they change their angle of travel) when they cross between two different layers of soil or rock. So if one has a source of seismic energy on one side and a detection device (a seismograph or a geophone) a short distance away, one can detect the seismic waves and determine the approximate depth of various layers or the depth to the bedrock, for instance. This is very useful in civil engineering and geological engineering, because engineers need to know if the soil can actually support the structure they're planning to build. Exploration geophysicists also use this technique to detect positions of mineral ores, oil, groundwater, geothermal sources etc.

So where does the shotgun come into all of this? Note in the previous paragraph, we said that there needs to be a source of seismic energy and a detection device. The source of seismic energy is simply something that impacts the earth surface with sufficient force to create seismic waves. For instance, one can use a sledgehammer to strike a metal plate on the ground. The sledgehammer is connected to the geophone recording system via a wire. The moment the sledgehammer impacts the metal plate, the recording starts. Of course, there are problems in using a sledgehammer in that (a) the results are not reliably repeatable as it depends on how tired the person swinging the sledgehammer is (b) it only outputs small amounts of seismic energy and only works on short distances and (c) it generates low frequency waves that mostly travel along the surface and don't penetrate too deep.

Therefore, what many people use is a shotgun (around 8 gauge or larger) to produce the seismic energy. The shotgun is usually mounted on a stand or a cart, so that even a weak person can operate it, without having to feel any recoil. In some cases, the shotgun actually fires a solid slug into the ground and in other cases, they merely use a blank shotgun shell, in which case the pressure energy of the column of air in the barrel is transferred to the ground. Like the sledgehammer method, there is a mechanism to start the geophone recording the instant the slug hits the metal plate placed on the ground. The advantages of this over the sledgehammer method are:


Such shotguns are often called "Betsy Guns". Here's a couple of examples of what they like: 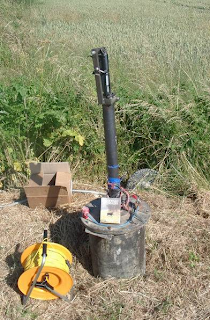 Image courtesy of Thomas M. Boyd @ Colorado school of Mines
Of course, this equipment is a bit more bulky and expensive than a simple sledgehammer and there's also the question of getting permission to use a shotgun in certain countries, but it is still a commonly used method in many places.

For deeper penetration of seismic waves, users generally use something more powerful, such as dynamite. But that's not a firearm and we won't discuss it here :).
Posted by The Editor at 2:44 PM