This one is famously seen in the Dirty Harry series of movies starring Clint Eastwood playing the role of "Dirty" Harry Callahan, a police inspector working in the San Francisco Police Department. 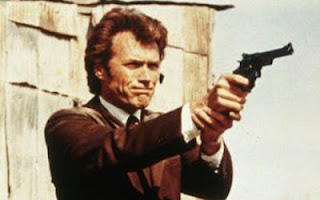 The Dirty Harry series of movies are famous for phrases such as "Go ahead, make my day" as well as usage of the Smith and Wesson Model 29 revolver firing .44 magnum cartridges, which we discussed many months ago in an earlier post. In fact, Dirty Harry extols the virtues of the model 29 with the following speech:


I know what you're thinking: 'Did he fire six shots or only five?' Well, to tell you the truth, in all this excitement I've kinda lost track myself. But being as this is a .44 Magnum, the most powerful handgun in the world, and would blow your head clean off, you've got to ask yourself one question: 'Do I feel lucky?' Well, do ya, punk?

The speech was not completely true because by the time the first movie in the series was filmed in 1971, the model 29 was no longer the most powerful handgun in the world. However, sales of the model 29 went up drastically after this movie was released, because of this speech.

Surprisingly, Clint Eastwood uses a grip that consists of holding the revolver in one hand and gripping the wrist of that hand with his other hand. This means that the weak hand is offering almost no support to the strong hand. If this was real life and not a Hollywood movie, it would be very hard for him to support the recoil of such a big revolver. 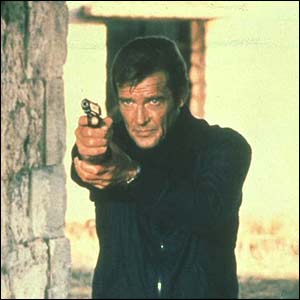 Dirty Harry isn't the only movie character to use the wrist brace grip technique. In the above picture, we see the famous English spy, James Bond (played by actor Roger Moore), using the same technique with his comparatively smaller Walther PPK pistol.

In the next post, we will study some more bad stances.
Posted by The Editor at 12:48 AM