In this post, we will look at a particular type of multi-shot firearm, the Harmonica Gun.

For centuries, many people were trying to build multi-shot firearms. For instance, there were pepperbox revolvers developed in the 1500s and the Colt Paterson revolver from 1836. Many of these early firearms had a 5 or 6 round capacity at most. In order to allow loading more rounds, some people developed the Harmonica Gun, otherwise called the Slide Gun.

It isn't exactly very clear who invented the first harmonica gun, but one of its early famous makers was Jonathan Browning, who started manufacturing them in Quincy, Illinois, way back in 1834. Jonathan Browning later migrated to Ogden, Utah and is mostly famous today, not for his harmonica guns, but for being the father of the famed firearm designer, John Moses Browning. 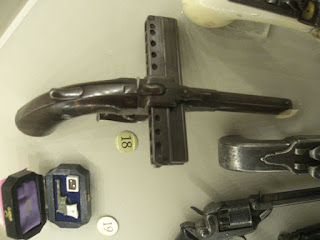 It consists of a firearm with a steel slide, which has multiple chambers bored into it. Each chamber is loaded with a cartridge, or with powder and ball. Firing mechanism is either via percussion cap or a pinfire cartridge, depending upon the manufacturer and model. The steel slide is loaded into a slot on the side of the firearm and locked into place using a cam or a spring loaded plunger.

Since the slide resembles the musical instrument, the harmonica, this type of firearm was called the harmonica gun.

In order to fire this weapon, the user simply cocks the hammer, then unlocks the slide's locking mechanism (cam or plunger) and moves it so that a new cartridge comes under the hammer, applies the slide lock and then pulls the trigger. The user needs to re-cock the hammer and move the slide manually each time to fire the next round.

Harmonica gun mechanisms were not restricted to handguns alone. For example, General Sam Houston was known to own a percussion rifle that used a harmonica loader mechanism and this rifle is displayed in the Smithsonian museum. 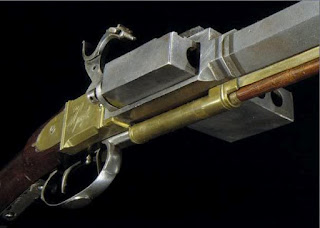 Harmonica guns often held 9 or 10 rounds in a slide and definitely had more capacity than revolvers of that era. However, since the user needed to move the slide manually along with cocking the hammer, it took more time to prepare one for firing than a revolver-type firearm. Balance was also a problem, especially when firing the first few or last few rounds, because the slide would predominantly hang off one side of the firearm and affect its balance. Also, the user would have to disassemble the slide from the firearm before they could carry it in a holster, which meant that these could not be immediately brought into action like a revolver could. These are some of the reasons why harmonica guns never really sold well, because of the competition from reliable revolvers.