In 1904, as relations between the Russian empire and the Japanese empire broke down, the Russo-Japanese war began. This was the first major war in the 20th century and had modernized troops on both sides. A Japanese colonel named Amazawa started experimenting with grenades fired out of rifles, during the Battle of Port Arthur. In our previous post, we'd mentioned that grenadiers of the previous era were typically the largest and strongest soldiers because they needed to throw the grenade for a considerable distance. A rifle fired grenade made it possible for weaker soldiers to use grenades too, by using a firearm to launch the grenade instead of throwing it.

The idea of using a firearm to launch a grenade is actually an old invention and was not of Japanese origin. In the School of Infantry Museum in Warminster, England, there is a flintlock musket called the "Tinker's Mortar", which dates back from 1681. This unusual musket has a cup built into the buttstock. To use it as a launcher, the user would first place the rifle with the muzzle on the ground, then pour a propellant charge into a special chamber under the the cup. A channel ran from the flintlock pan to the cup. A grenade with a fuse was placed inside the cup. When the powder in the pan was lit, the pressure of the burning propellant would launch the grenade and the flash would also simultaneously light the fuse as the grenade was pushed out. This was a very cumbersome device, so the idea of a rifle launched grenade was generally shelved in the west for a few centuries. It was the work of Colonel Amazawa in Japan that restarted interest in this subject again. As it turned out, a number of observers from every major western power were watching the course of events of the Russo Japanese war and this is how the concept returned back to Europe.

In 1907, a Britisher named Martin Hale invented a rod grenade, followed by other inventors with similar ideas from Germany, France, Austria etc.

The concept of a  rod grenade is simple. It consists of a specialized grenade with a simple steel rod attached to it. The rod is inserted into the barrel of the rifle and a special blank cartridge is chambered into it. The rifle butt is placed on the ground. The user holds the grenade's safety spoon with one hand and removes the safety pin with the other. The user then places the hand that removed the safety pin back on the rifle's grip, then released the hand holding the safety spoon and places it on the fore stock and fires the rifle as quickly as possible.

This idea was used from 1907 to the early stages of World War I. While it worked decently in theory, there were some practical issues with it. On the good side, it enabled users to launch grenades at longer distances than was possible before. However, after repeated firing of grenades with this method, the rods tended to damage the rifle's barrel. If the user didn't move fast enough after releasing the safety spoon, the grenade could end up exploding on the user's face. If the user was suddenly faced by an enemy close by, the rifle was unusable as a firearm, as the user would have to remove the grenade from the muzzle, re-insert the safety pin back into the grenade, remove the blank cartridge and then chamber a normal round before he could use the rifle to shoot at his enemy.

In order to fix the issue with the rods damaging barrels and the need for the user to quickly launch the grenade after releasing the safety spoon, a cup-type rifle grenade launcher was invented in the middle of World War I. With this, a standard hand grenade could be used. The user would remove the safety pin and place the grenade in the cup launcher. The cup held the grenade's safety spoon in place until it was launched. The user would then place the rifle butt on the ground, load the rifle with a special blank cartridge and then fire it. This type did not wear out the barrel like the rod grenades did and also, the user didn't have to fire the weapon right away, as the cup would hold the grenade's safety spoon in place until it was fired. It also could use standard hand grenades, which meant the soldier didn't need to carry two types. The only disadvantages are that it required the user to use a special cup adapter and a special blank cartridge to shoot grenades, which could leave the user vulnerable if he was surprised by an enemy when preparing to fire one.

The next development was by the French and was called the "Vivien et Bessiers" shoot-through grenade named after its inventors, Vivien and Bessiers, (otherwise called VB grenade). This built on the concepts of the cup-type rifle grenade, but did not require a special blank cartridge to launch. Instead, this type of grenade has a hole in the middle, that allows a standard rifle bullet to pass through it. As the bullet passes through the center, it arms the grenade. The grenade is then launched by the hot expanding gases coming out of the barrel. So all that the user has to do is place the grenade on the cup and then use a standard rifle bullet to launch it. While this type did not require special blank cartridges, it still required a special cup adapter to use.

Another type of grenade is the bullet-trap type, which traps the bullet instead of letting it pass through and uses its momentum to carry the grenade into the air. Like the shoot-through grenades, the user can use a normal cartridge to launch the grenade and has no need to carry blank cartridges. This type does not require any special cup adapter unlike the shoot-through type. 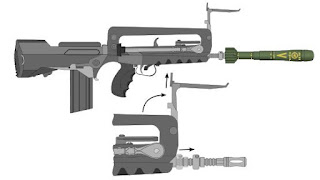 A French APAV40 grenade (green) at the end of a FAMAS rifle. Click on image to enlarge
Original file was licensed under a Creative Commons Attribution-Share Alike 2.0 license by Rama at wikipedia.

In the above picture, we have a bullet-trap type French APAV40 rifle grenade (the green part). This can be used for both anti-personnel and anti-vehicle applications. The user merely places it on the muzzle of any NATO rifle (such as the French FAMAS rifle) and pulls the trigger. The impact of the bullet striking the bullet trap and the expanding gases serve to arm the grenade and launch it in the air. The grenade has a mechanism that allows it to explode on impact. Larger bullet trap types such as the French AC58, the Belgian & Leichtenstein ENERGA grenade and the American M31 HEAT were designed to be used against armored vehicles.

Rifle grenades have the advantage of having the maximum range of all firearm launched types and modern designs do not require any special adapter or ammunition to launch them. Also, the rifle's balance and weight are not affected as some other designs which we will study shortly. The disadvantage is that if the user wants to launch a grenade, he must mount it to the muzzle before every shot. If he is surprised by an enemy at close range while preparing to fire a grenade, he cannot easily respond with his rifle, as it takes some time to take out the grenade and prepare the rifle to shoot normally.

In our next post, we will study some more developments of using firearms to launch grenades, including dedicated grenade launchers.