What the heck is an "Arshin"?

Imagine you are now the proud owner of a classic Russian Mosin-Nagant M-91 rifle and are excited to try it out for the first time. So you take it out to the range, adjust the iron sights for a target 400 meters away and shoot at it. Upon shooting a few times, you examine the target and notice that you're not hitting where you're aiming at. Is there something wrong with the rifle? Actually, the answer may have to do with your misunderstanding about how the sight works. 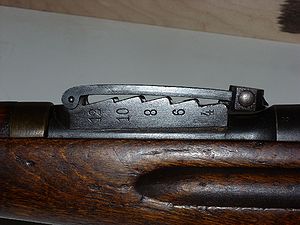 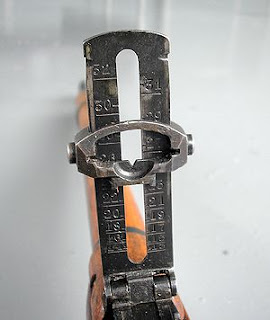 In the above image, we see a Mosin-Nagant rifle sight called the Konovalov type. This sight acts as both a  tangent sight (for shorter ranges, marked as 4-12) and a ladder sight (for longer ranges, marked as 13-32). Note that the sight is sort of curved, as seen in the first image. Older Mosin Nagants have a flat shaped sight using the same idea.

The mistake that some people make is assume that these settings are in meters (e.g. 4 = 400 meters, 6 = 600 meters etc.) For Mosin-Nagants manufactured before 1930, this is not true -- in fact, these are calibrated in a unit called "Arshin" (plural: "Arshins" in English, "Arshiny" in Russian). So what the heck is an "Arshin" then?

To answer this question, we must go back to 16th century Russia, where this unit of length first originated. This unit was the Russian equivalent of the English "yard" measurement. Its actual length varied over the years, until Peter the Great standardized it in the 18th century to be about 27.95 inches long (or about 71.1 cm. or 0.78 yards). This continued to be how distances were measured in Russia until some time in 1925, when the Soviet Union officially adopted the metric system throughout the country. Konovalov type sights calibrated in arshins continued to be manufactured for some years after, until 1929.

Therefore, with older Mosin-Nagant rifles built before 1930, the sights were actually calibrated in arshins. Hence, when the slider is pushed to 4, the sights are set to aim at a distance of 400 arshins, not 400 meters. 400 arshins is approximately 285 meters, which explains why the rifle might not be shooting where the user expects it to!

Edit: The editor is indebted to Mr. Bernard Samartsev for his comments and corrections to the original article noted below.