In today's post, we will study a multi-barrel firearm known as the Nock gun.

Henry Nock was originally a British locksmith, but in 1775, he invented a firearm lock and received a patent for it. During this period, the London Gunmakers guild (The Worshipful Company of Gunmakers) had influenced lawmakers in England to pass laws that made it impossible for non-guild members to manufacture or trade in firearms. As Henry Nock was not yet a member of the Gunmakers guild, he could not legally form a firearm company under his own name. Hence, he took on a couple of partners: William Jover and John Green. The new company was named Nock, Jover & Co. and William Jover was already a Master of the Gunmakers Company guild, thereby allowing the company to legally trade in firearms. The American Revolution caused Nock's company to receive a large amount of business and his company began to grow. The French Revolution and the Napoleonic wars were also profitable for this company, as it received several orders from the British Army and Navy.

What we know as the Nock gun was not invented by Henry Nock. It was actually invented by a British engineer named James Wilson in 1779, but since James Wilson could not himself manufacture the firearm, he came to Nock's company to manufacture the prototypes for him. In 1780, the Royal Navy commissioned Nock to produce 500 of these guns for use on their ships and the firearm was popularly referred to as the Nock gun instead of the Wilson gun. 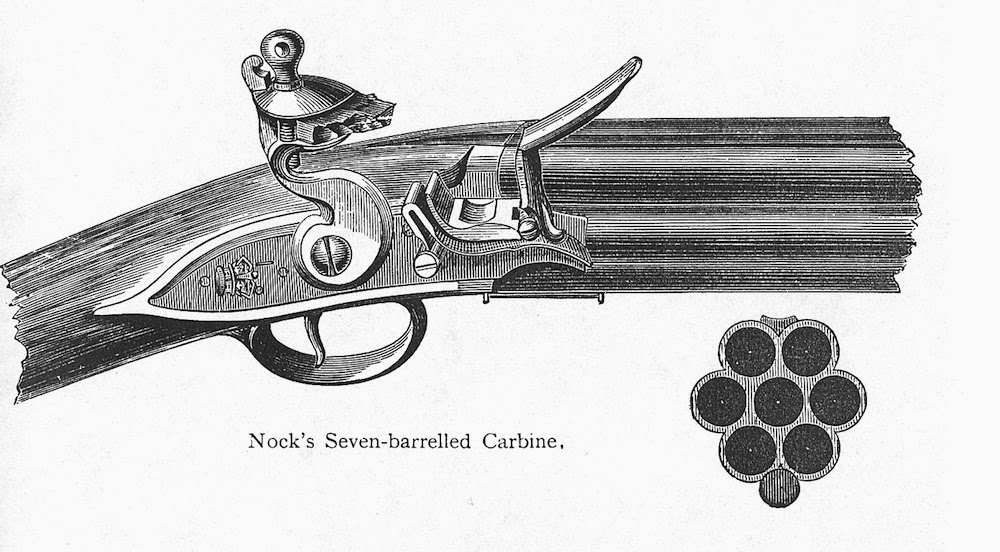 The Nock gun is a 7-barrel fiream using a flintlock firing mechanism. Six of the barrels are arranged in a hexagonal arrangement around the seventh central barrel. The central barrel has small vents that link to the other six barrels. The firing pan connects to the central barrel and when the charge in the central barrel ignites, the flame spreads through the small vents to the other six barrels and discharges all seven barrels almost simultaneously (at least in theory. In practice, not all the barrels would always discharge). The first three firearms delivered to the Royal Navy had rifled barrels, but since they took too long to load, all the later models came with smoothbore barrels. 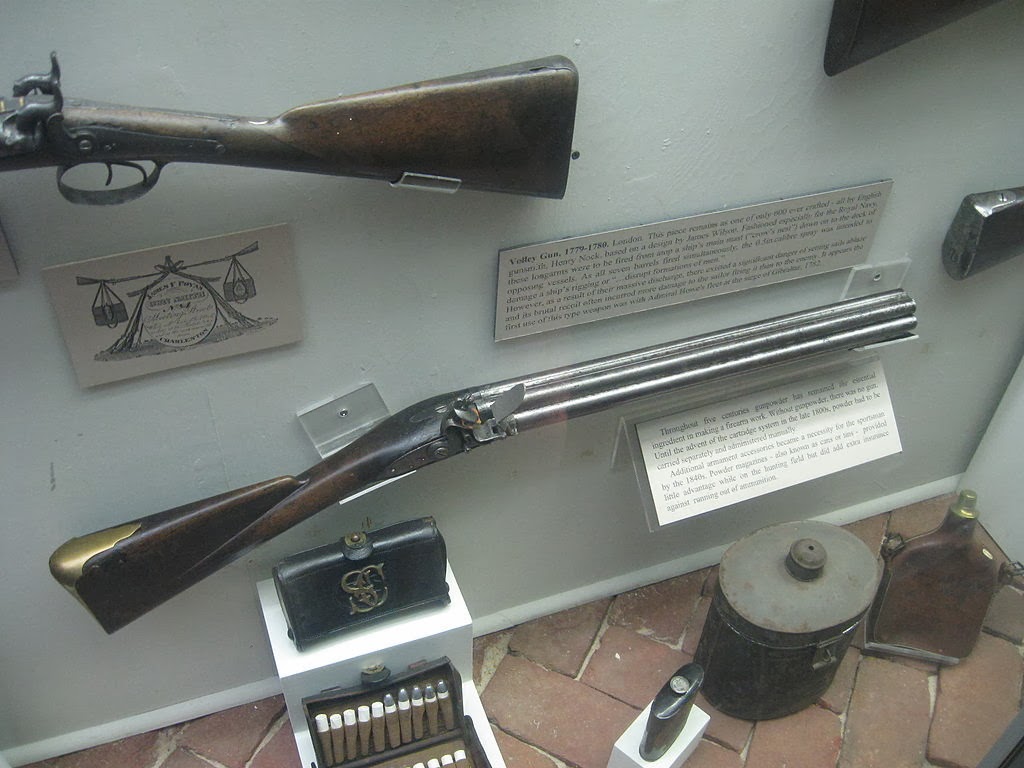 The British Navy had decided that since shipboard battles generally involved sailors and marines packed together in tight masses, what was needed was a weapon that could shoot a large volume of shot. This firearm was intended to be carried onto a ship's rigging and to fire at the deck below, in the event that the ship was boarded by the enemy.

In theory, this weapon could inflict heavy damage to an incoming group of enemy soldiers. In actual practice, this weapon was actually much more hazardous to its user. Due to the simultaneous discharge of seven barrels, the recoil was pretty large and often ended up bruising or breaking the shoulder of the person operating it. The recoil also made the firearm hard to control and accuracy suffered as a result. Hence, many sailors didn't want to use this weapon at all. On top of that, firing the weapon would often cause a large number of sparks to fly out of the side of the firing pan. Hence, the naval officers were reluctant to use these firearms near their ships rigging, because they feared that they could start fires and burn through the rigging and sails. The Nock company tried producing a smaller and lighter version, but the recoil was still too much for an average sailor to operate and the British Navy ended up phasing these out of service by 1804.

Meanwhile, Henry Nock was officially accepted as a Freeman of the Gunmakers Company guild in 1784 and as a Master of the Gunmakers Company guild in 1802. His company became well known for their quality double barreled hunting rifles and duelling pistols. After his death in 1804, his company was continued by his son-in-law James Wilkinson, who later brought his son, Henry, into the business and renamed the company to Wilkinson & Son around 1818. The company diversified into making firearms as well as swords and was later renamed to Wilkinson Sword in 1864. In 1903, when British firearm laws were modified to make it harder to sell firearms to the public, the company started to diversify into several other products, such as automobiles, ceremonial swords, typewriters, gardening tools, scissors and even razor blades (in 1965). In fact, the company continued to make ceremonial swords for British officers until 2005 and the company is still known for its razors and razor blades (they are one of the few manufacturers that still make the old-fashioned double edged safety razor blades)

While the Nock gun was only used in service for a few years, one showed up in the iconic 1960 movie, The Alamo, starring Richard Widmark as Jim Bowie.