In our last post, we saw how an ancient gunsmith would build the head piece and tail piece and assemble some of the parts of the manual rifling machine. In today's post, we will deal with another important part of the machine, the rifling cutter.

Briefly, the rifling cutter is the part that actually cuts the grooves on the barrel. There were several designs of rifling cutters over the ages and we will study some of the common variants in today's post. First, we have the actual cutting tool. This was usually made of forged steel, with one or more sharp cutting edges. Once the sharp cutting edge was formed, the gunsmith would harden the cutting tool using the same heat treatment techniques that were known to sword smiths. 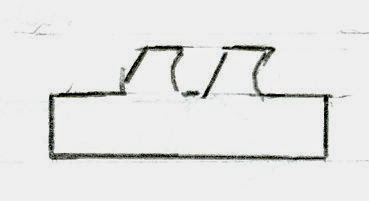 A cutting tool. Click on image to enlarge. Author places image in public domain. Not to scale.

In the above image, we see a cutting tool with two teeth. A cutting tool could have a single cutting tooth or multiple teeth, depending upon the gunsmith's desires.

This cutting now needs to be mounted to a cutter body, so that it can be used in a rifling machine. The simplest rifling cutters had the bodies made of wood. The gunsmith would first use a lathe to make a wooden cylinder out of a hard wood (such as oak or hickory), a little less than the diameter of the barrel to be rifled. Then the gunsmith would chisel out a slot on the top of the cylinder, just big enough to insert the cutting tool into the slot. The gunsmith would then insert the cutting tool into the slot and add glue to fasten the tool to the cutter body. Finally, as an optional extra precaution, the gunsmith would also wind some wet twine around the cutter body to overlap the tool's body. As the twine dries up, it tightens around the wood and secures the cutter extra-tightly to the body. 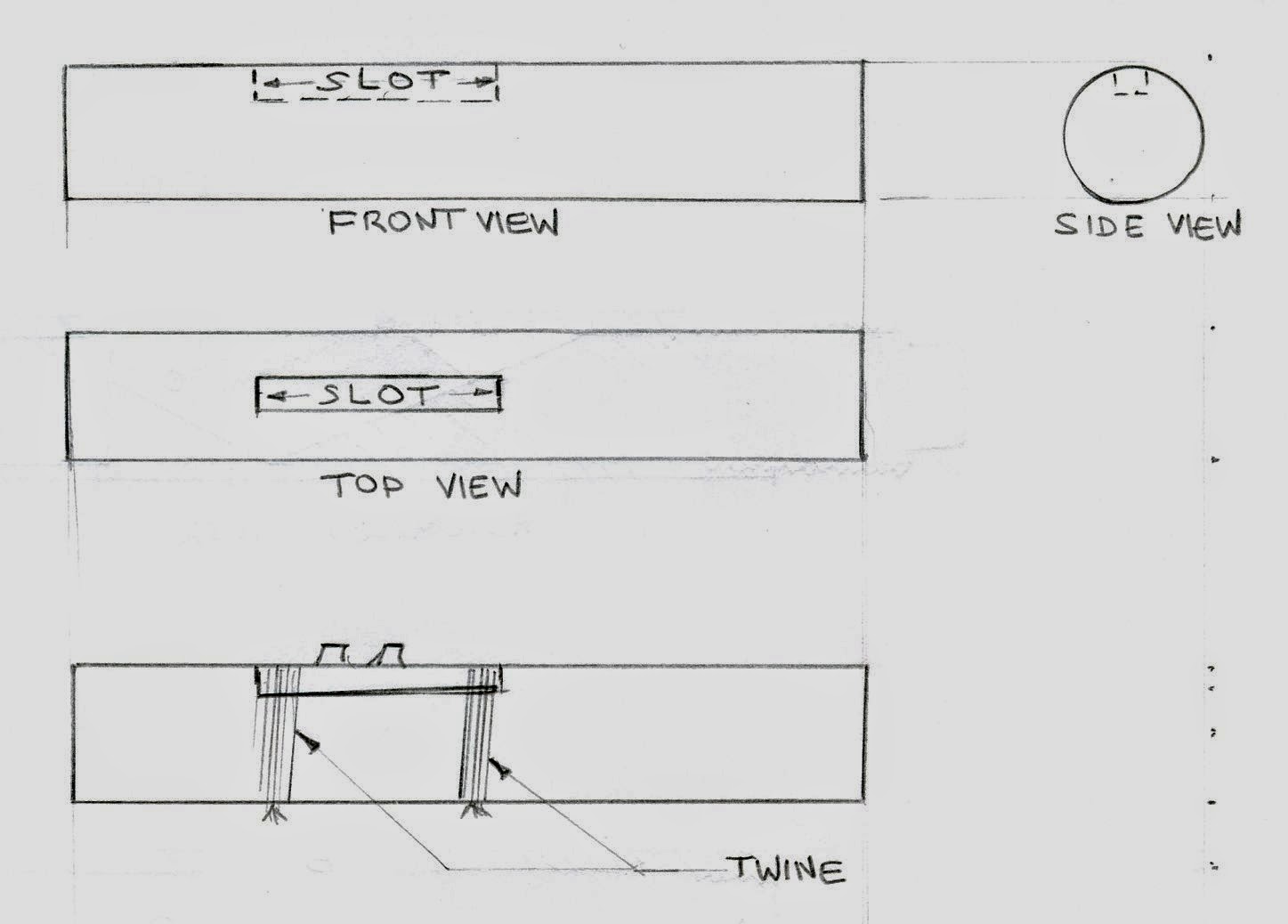 A simple rifling cutter. Click on image to enlarge. Author places the image in the public domain. Not to scale.

The above image shows how ancient gunsmiths would construct such a cutter. The advantage of this type of cutter is that it is relatively easy to construct. However, the height of the groove cannot be adjusted easily with this type of cutter. The solution is to adjust the barrel's position to deepen a groove and we will study that when we look at barrel clamps. In other cases, the gunsmith would simply move the cutter back and forth until it cut the groove to the required depth throughout the length of the barrel.

A slightly better modification to the above design was also used by ancient gunsmiths. The gunsmith would construct a wooden cylinder out of oak or hickory, using a lathe. Unlike the previous cutter body though, this one would have a thicker cylinder in the center and two smaller cylinders at the end. Then, the gunsmith would split the cylinder into two pieces lengthwise and then carve out a long groove on each of the halves. The gunsmith would then attach the cutting tool to one of the pieces and then glue the two halves back together and secure the ends with twine or tight leather bands. In the gap between the long grooves, the gunsmith would force two tight fitting wooden shims in, before gluing the two halves together. The image below shows how this was done: 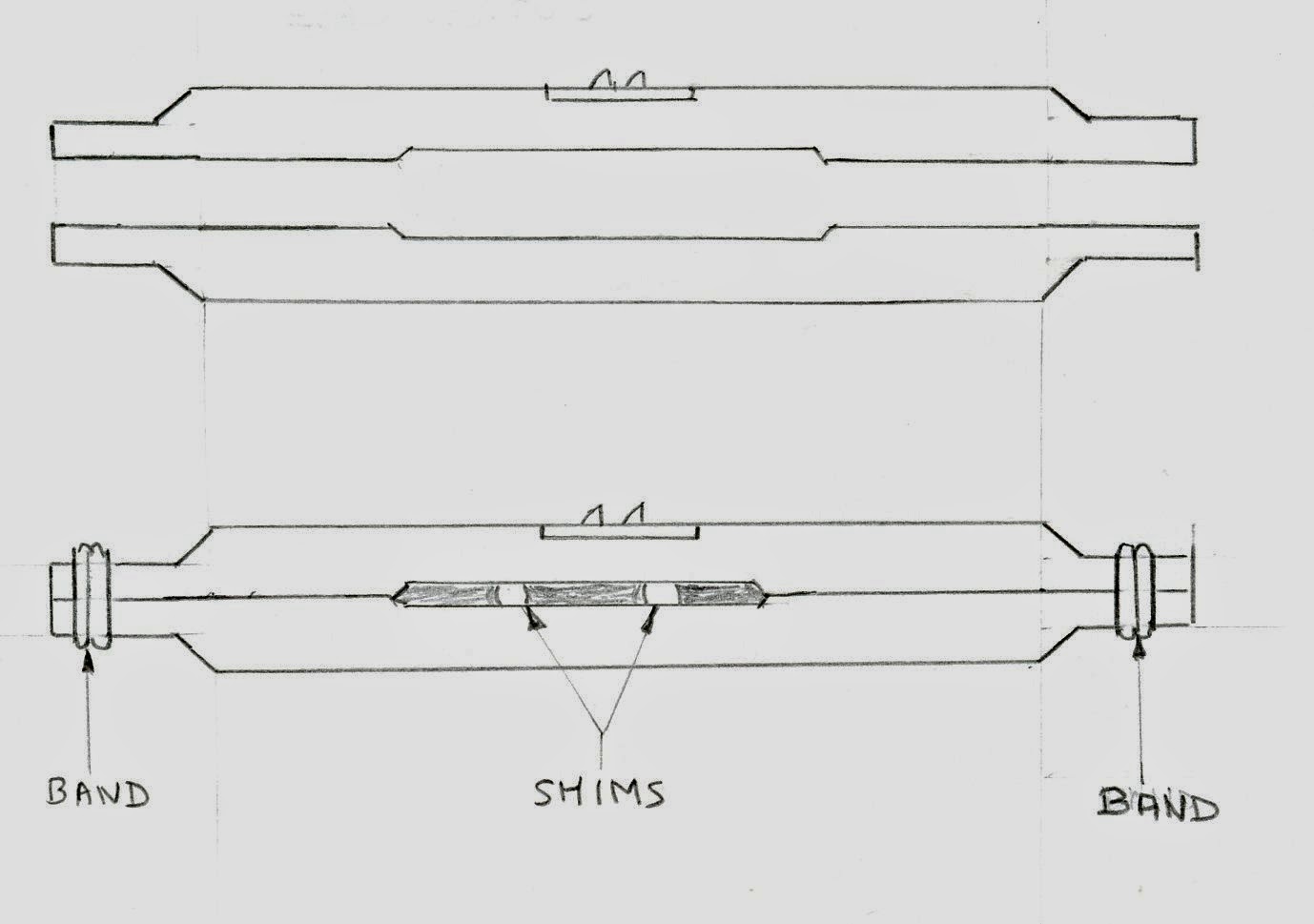 Ancient Rifling Cutter. Click on image to enlarge. Author places the image into the public domain. Not to scale.

Another more advanced cutter design that allowed gunsmiths to precisely set the depth of cut of the grooves was also used. To make such cutters, gunsmiths needed access to techniques to cut precise screw threads and make springs. These technologies were already known and perfected by clock manufacturers, so gunsmiths in areas that were famous for clocks (such as Nuremberg in Germany) took advantage of their knowledge to make a better rifling cutter.

The cutting tool in this case, has a hole drilled in it, through which a pivot pin may be passed. There are two threaded bolts (one for each end of the tool), one wedge shaped metal part, another metal block and a spring, as shown below:

Click on image to enlarge. Author places image in the public domain. Not to scale.

The ancient gunsmith then makes a hollow metal tube, with an inside diameter that is slightly larger than the wedge's height. Screw threads are cut on the inside of each end of the metal tube. The gunsmith then drills a hole across the tube to fit the cutting tool in and cuts a large slot on top for the cutting tool to protrude through, as shown in the image below:

Click on image to enlarge. Author places the image in the public domain. Not to scale.

In the above image, A and D are the screw threads that are cut on each end of the tube. C is the hole drilled across the tube, through which the cutter will be fitted to the case with a pivot pin. B is the slot cut on the top of the tube, that allows the cutting tool to protrude through.

The parts are then assembled into the cutter case tube, as shown below:

Click on image to enlarge. Public domain image. Not to scale.

By rotating the threaded bolt on the left side, the gunsmith pushes the wedge in or out of the tube, which forces the cutter to rotate about the pivot pin and protrude higher or lower out of the slot B, which adjusts the depth of the groove to be cut. The metal block and spring push against the cutter and keep it from rotating from the other side. With this type of cutter, it is possible to set the depth of cut very precisely by rotating the bolt on the left side. This sort of cutter design was used by gunsmiths for a very long time, all the way to about World War II. In fact, we discussed this type of cutter way back when we studied cut rifling techniques almost four years ago. There are still some gunsmiths using such cutter designs today. 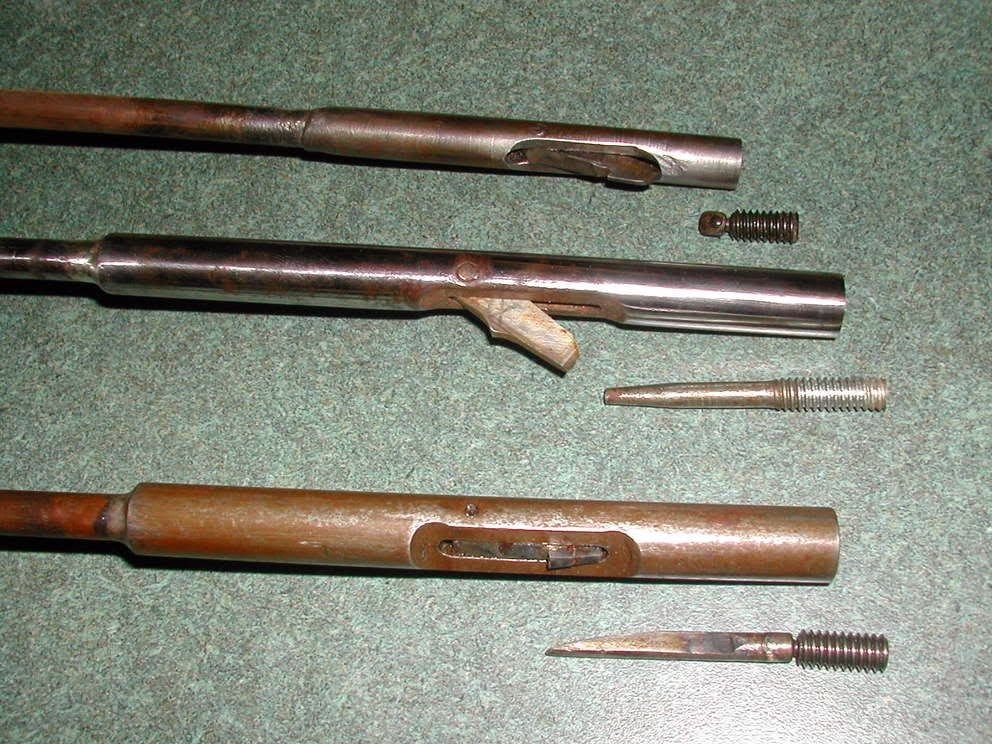 The above image shows three rifling cutters of this design. You can clearly see that each cutting tool is attached to its case using a pin. You can also see the wedges and threaded bolts on the right side of each tool.