In our last post, we studied the capsule magazine. In today's post, we will study a type of magazine that is known for its capacity. Today's object of study will be the drum magazine.

This type of magazine is a flat cylindrical shape, similar in shape to a drum, which is why it is called a "drum magazine". These magazines can generally hold a lot of cartridges inside them. The gun that was originally associated with the drum magazine was the Thompson submachine gun, otherwise known as the "Tommy Gun", "Chicago Typewriter", "Trench Broom" etc., which was first produced in 1918.

A Thompson submachine gun with a drum magazine attached.
Click on the image to enlarge.

The above image shows a Thompson submachine gun with the drum magazine attached. Now let's look at the mechanism from the inside: 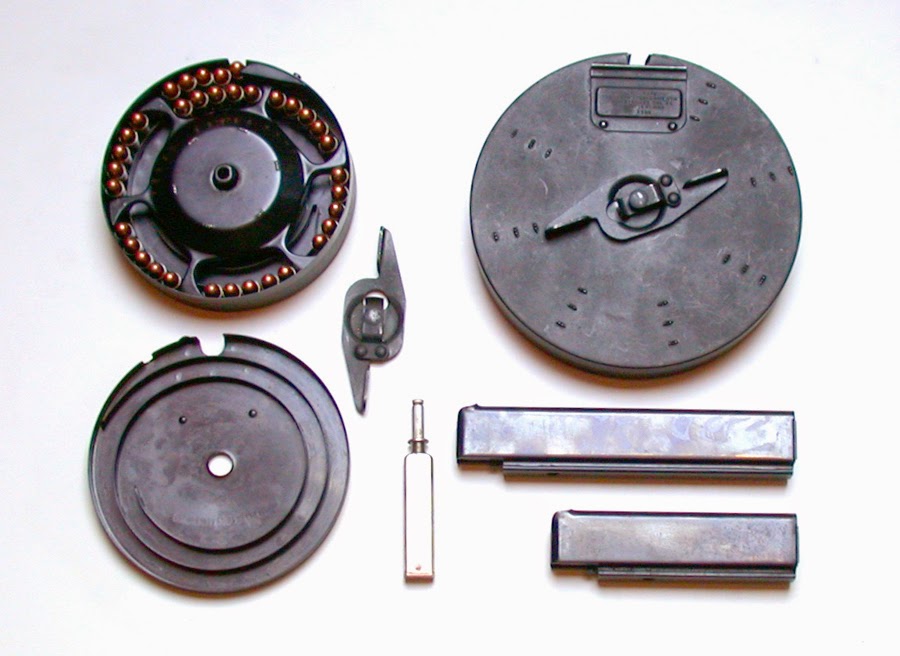 Drum magazine internals. Click on the image to enlarge.
Image licensed under the GFDL from user Hmaag at wikipedia

The above image shows both drum and box magazines, but we will only consider the drum magazine here. This drum magazine has a coil spring, which is wound up using a key. The unwinding coil spring powers a spider gear assembly, which is used to push the cartridges along a spiral path towards the opening on the top of the magazine. To load this type of magazine, the key is removed and the top cover of the magazine is lifted up to expose the interior of the magazine. Then cartridges are filled into each of the compartments, first filling the outer ring and then moving on to the inner ring. Then the magazine cover is placed back into position and the key is wound up to a certain number of clicks, depending on the capacity of the magazine.

Another common type of drum magazine is the Beta C-Mag, designed by Jim Sullivan and manufactured by the Beta Company. 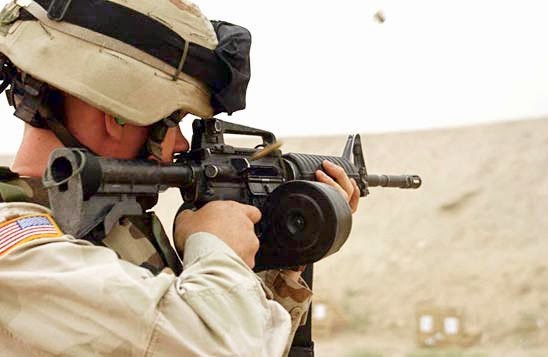 An 82nd Airborne Division paratrooper firing his M4 equipped with a Beta C-Mag. Click on the image to enlarge. Public domain image.

A Beta C-Mag can hold up to 100 cartridges. Unlike the earlier drum magazine we studied, this one is a lot more compact because of the double drum design and also distributes the weight better. This type of magazine is available for several firearm models, including the M16 family, M14 rifle, FN FAL, Steyr AUG etc.

In general, drum magazines have much higher capacities compared to box magazines. However, they have been prone to jamming problems and they also tend to increase the weight and alter the balance of the firearm.