In our previous post, we'd studied the helical magazine, as invented by Calico Inc. in 1985. However, there is a precusor to this that was invented in the 19th century, called the Evans Repeating Rifle, that also used a helical magazine of sorts. We will study that particular rifle in today's post.

The Evans rifle was invented by Warren R. Evans, a dentist from the state of Maine. He received his first patent for an improved magazine in December 1868 and another patent for an improved gun lock in 1871. With these two patents, he entered his prototype rifle into the US Army trials of 1872, but his rifle was not selected due to mechanical issues. However, he wasn't the only mechanically inclined person in his family and his brother, George Franklin Evans, was also a talented machinist. He and his brother joined forces with a few other investors and started the Evans Rifle Manufacturing Company in Maine in 1873, to manufacture this rifle design for the commercial market.

This rifle is a lever-action firearm and the trigger guard doubles as the lever that operates the action. Like the Spencer rifle (which we studied earlier here and here), this rifle also has a magazine inside the stock. However, the Spencer rifle has a tubular stock, whereas this rifle has a helical type feed mechanism that uses an Archimedian screw (The screw gets its name from the fact that it was supposedly invented by Archimedes, but was actually invented by Assyrians about 350 years earlier. It was used for pumping water in the ancient world). In the case of the Evans rifle, the screw thread is used to push cartridges into the chamber. 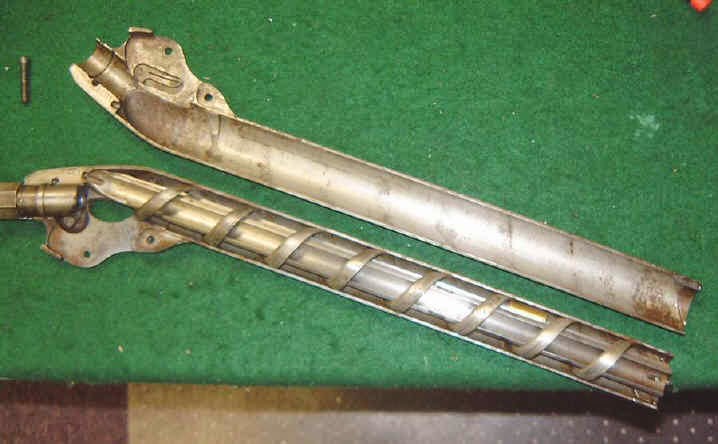 The above image shows a disassembled Evans rifle magazine. The barrel is  facing to the left and the two halves of the magazine occupy most of the picture. The screw thread can be clearly seen inside the magazine. Unlike the helical magazine that we studied in the previous post, this one is not spring loaded. Instead, upon operating the trigger guard lever, the screw rotates 1/4th of a turn, which pushes the next cartridge into the chamber.

About 12000 to 15000 rifles were manufactured by the company during its existence. Evans rifles were given to several foreign military officers and politicians and were also endorsed by celebrities of the day, such as Kit Carson and Buffalo Bill Cody. In fact, Kit Carson even enthusiastically submitted the following testimonial to the Evans company, saying: "At twenty paces, have, with this rifle, shot the eyebrows from my wife, and every night regularly, in the presence of an audience I shot an apple from her hand, a pipe from her mouth, a penny from her fingers, or snuff a candle from her hand. I think the Evans is the safest and most complete repeating system ever devised." 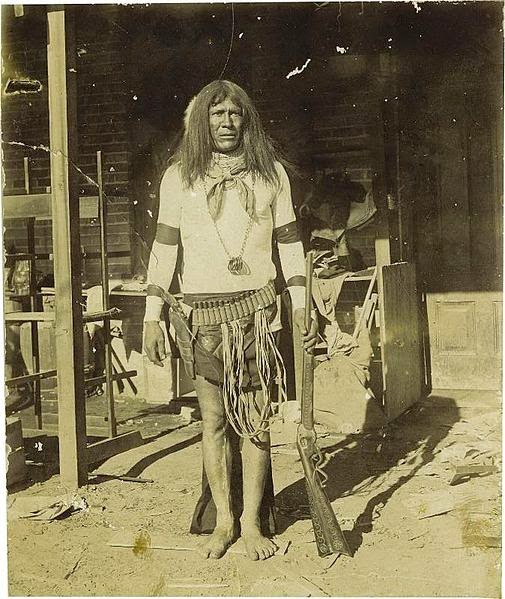 An enthusiastic endorser of the Evans rifle. An Apache Indian holding an Evans rifle from around 1880. Public domain image.

However, there are a few disadvantages of this design as well:

The first is that the new cartridges are loaded through the butt plate, not the front of the magazine (unlike the Calico helical magazine that we studied in the previous article). This means that if the user loads a single cartridge into the magazine, he (or she) has to pull the lever 33 times so that the cartridge works its way through the magazine into the chamber.

This rifle also uses specially designed cartridges (the .44 Evans Short and .44 Evans Long for later models), which were not used by any other firearms and were not easily available either. The only manufacturer of this ammunition was the Evans Rifle Manufacturing Company themselves and they did not manufacture this ammunition in enough quantities to meet the market demands. The rifle also had mechanical issues and was affected by dust as well. These were some of the reasons why it was not to be accepted by the US Army in 1872. The company tried to enter the commercial market, but the lack of availability of ammunition for it caused it to not sell well. Also, after the Civil War (1861-1865), there was a surplus of firearms available on the market for cheap and the company could not compete on price against older established firearms companies. By 1879, the company went bankrupt and its assets were sold by March 1881.