In our last post, we looked at how bronze was used for early gun barrels. In today's post, we will look at early barrels made of a form of iron called wrought iron.

As was noted in our previous post, some of the problems with bronze were the price and availability of materials. Iron ore is much more common than copper and tin. However, it is harder to extract iron from its ore, which is why the iron age started after the bronze age. Early iron implements were made from iron from meteorites, which is relatively pure iron and date back to 3000 BC or so. Therefore, it was rare and expensive during this period. Later on, people discovered how to extract iron from minerals on earth. It is not entirely certain how the knowledge of processing iron was spread, because various cultures around the world seem to have discovered it. For instance, around 1800 BC, there is evidence of iron smelting in both India and Turkey, by 1500 BC, smiths in West Africa were processing iron ore as well. Once the art of processing iron from minerals found on earth was mastered, the price of iron became much cheaper than bronze, since iron ore is commonly found on the earth's crust.

Wrought iron is a form of iron, with very little carbon content (less than 0.1%). If more carbon is added to it, the result is steel and if even more carbon is added, the result is called "cast iron", which we will study in our next post, as it has some importance in the history of firearms as well. Wrought iron can be shaped by heating and hammering it and it is easily welded as well. It cannot be easily hardened though. Early blacksmiths produced wrought iron in small furnaces called bloomeries and this technique persisted for many centuries. The method consists of heating iron oxide ore to burn off the oxygen and remove the other impurities by using a flux to form slag, which can be separated from the metal.

These days, TV programs show steel mills pouring molten metal into molds, but for many centuries, people could not produce fires hot enough to melt iron. Instead, iron was purified by heating the ore enough to burn off impurities and making the iron soft enough to be extracted. The fuel of choice was charcoal, made from the wood of trees. The use of coke and coal did not start until people had burned up most of their forests and had to look for alternate sources of fuel.

Charcoal was traditionally produced by heating wood without access to air, so that it doesn't burn, but removes water and volatile chemicals from the wood. The standard technique was to form a pile of wood in a conical shape, with a central opening for a chimney, then cover it with mud, clay etc. to make it air tight. Then, some burning fuel is introduced into the chimney and the air is slowly cut off while the wood burns, which makes it burn slowly and form charcoal. The process takes a number of days to finish and is a delicate operation. People who specialized in making charcoal were called "colliers" (your humble author has an English friend with the last name "Collier" and another American colleague with the last name "Kohler" (the German name for "Collier"). Perhaps they both had ancestors that specialized in this business). The resulting charcoal burns hotter than wood.

The above method is somewhat inefficent and modern methods use sealed metal containers, which produce a much higher yield of charcoal.

The next bit was to pre-process the iron ore before extracting the iron from it. Iron ore usually consists of iron oxide, with other impurities in it. First, the metallic ore was separated from the non-metallic earth and rocks by washing it, and then it was roasted. The purpose of roasting the ore is really for a few reasons: First, it removes the moisture from the ore, as well as reduces the content of any sulfur impurities. Second, it makes the ore easier to crush, before smelting it.

A bloomery made of heat resistant materials, such as earth and clay, was constructed next. A bloomery is basically a conical furnace with one or more openings in the bottom to allow air in. An opening is also made in the bottom, to extract the metallic iron. 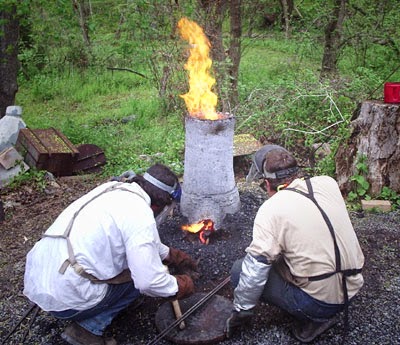 The bloomery is first preheated by burning charcoal and after it becomes hot, the iron ore, limestone and more charcoal are added on top. Air is blown in from the bottom using bellows, either operated by hand for smaller operations, or operated by water wheel in the medieval era.

The hot carbon in the charcoal combines with the oxygen in the iron oxide ore, to form carbon monoxide and carbon dioxide, leaving behind the iron metal. The small pieces of iron left behind fall to the bottom of the furnace and form a spongy mass called "sponge iron". Silicate impurities in the ore combine with the limestone flux to form a slag, which also falls to the bottom and mixes with the sponge iron. The hot sponge iron mass is pulled out from the bottom of the bloomery and hammered while it is still red hot. This helps shape the iron bar and also forces out the slag from the iron. The result is wrought iron.

Incidentally, the name "wrought" is an old English word that means "worked" and this process of hammering the sponge iron is what gave "wrought iron" its name. This method was used from the beginning of the Iron age until the 18th century or so. It isn't a very efficient method though, as it only extracted about 50% of iron from the total iron found it the ore, even in the best case scenario. In most situations, only about 20% of the iron was extracted and the rest was lost in the slag. However, the slag could be recycled in the next batch to extract more iron.

Later on, the process was improved in the 18th century to use a finery forge and later, a puddling furnace, to produce wrought iron more efficiently. We'll study these processes in the next post or two.

Since wrought iron is very malleable (i.e. it can be beaten into a flat shape easily) and weldable, gunsmiths could easily make parts out of it. A flat sheet of metal would be forged into a long tube and then the two edges would be welded together to form the barrel. We discussed this process in detail a few years ago and the reader is advised to read that article if needed. Other parts of the firearm were also likewise forged out of wrought iron.

Wrought iron isn't as hard as cast iron, which we will study in a future post, but it was used for quite a while because it was cheaper than brass and widely available. For now, enjoy a couple of videos showing how wrought iron is made in a bloomery.

As you can see from the videos, when using a bloomery, there's a lot of work that goes into producing just one small bar of iron. We will study more improved methods in the next couple of posts.
Posted by The Editor at 11:04 PM