Forging Rifle Barrel Blanks in the 1920s - I

After all the stuff we studied about metallurgy in the last several posts, we will look at an ancillary subject today, forging of rifle barrel blanks. We have already covered barrel manufacture from barrel blanks in some detail in previous posts many months ago. In today's post, we will study the process of manufacturing the barrel blanks as it was done in a factory in America in the 1920s. In particular, this was a factory belonging to Wheelock, Lovejoy & Company, which was designed to mass-produce rifle barrels designed to meet specifications demanded by some foreign governments. Some of the pictures and information in this post was taken from the book "The Working of Steel" by Fred Colvin and K.A. Juthe, and in addition, K.A. Juthe was the designer of the factory as well.

This factory did not manufacture its own steel: instead, they bought what they needed from a large steel manufacturer. The steel manufacturer made the steel to the required specifications and supplied them in the form of bar stock, but the length of the supplied bars was longer, typically each bar measured something like 30 or 35 feet long (about 9.1 to 10.7 meters long). 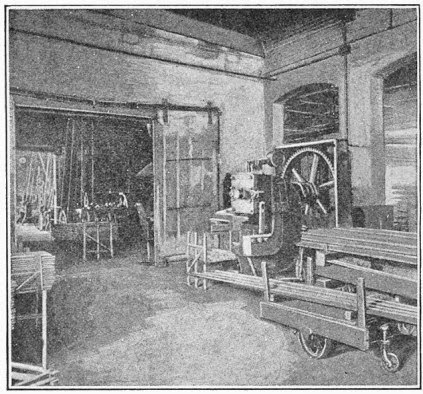 Cutting the bar stock to size.

Therefore, the first step in the process was to cut each steel bar into smaller lengths to make barrels. The bars came on trucks and were fed through the cutting-off shear, where they were cut into pieces of the proper length. The pieces were actually a little longer than the final barrel lengths, to allow for trimming during the machining process.

A close up of the details of the cutting off is shown in the next image. 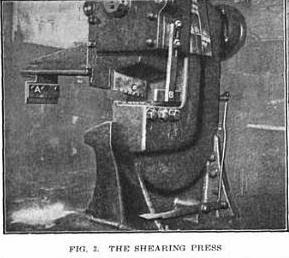 A is the stock stop bolted to the side of the frame and the ledge formed by the strip bolted to the stop, keeps the bar stock level during the cutting process. The hold-down B prevents the back end of the steel bar from flying up when the bar is cut. The knife C has several notched edges with which the barrels can be cut, so that it need not be taken out for resharpening, until all the notches are dull.

The cut barrel pieces then passed into the next room, where there was a forging or upsetting press.

Upsetting (or more properly, upset forging) is a process of increasing the diameter of the end of a work piece, by compressing it along its length inside a die. The images below show the process. 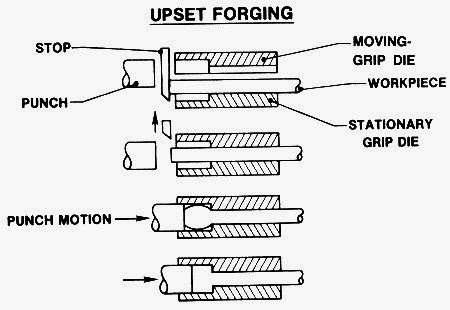 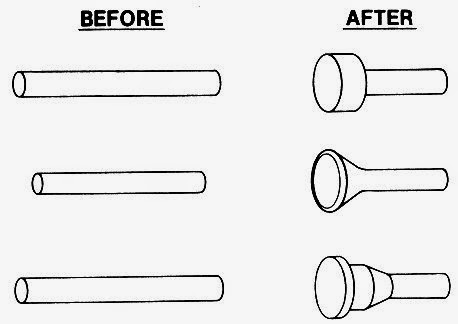 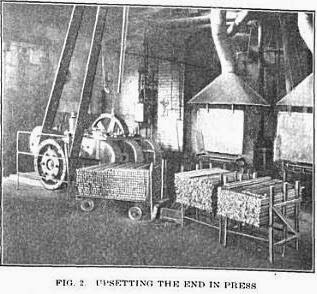 The barrel pieces were heated in a furnace to soften them, before being sent through the upsetting press. The press could handle the barrels from all the heating furnaces shown in the room. The men changed work at frequent intervals, to avoid excessive fatigue.

The barrels were then sent through a continuous heating furnace to be reheated and then straightened out as much as possible before being tested for straightness. 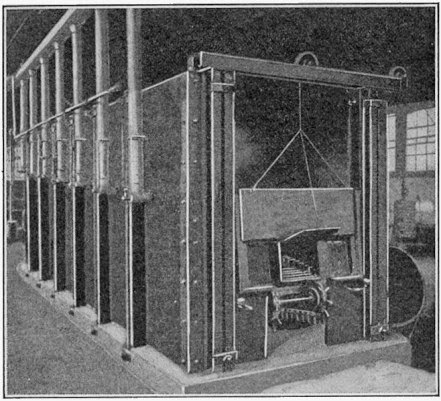 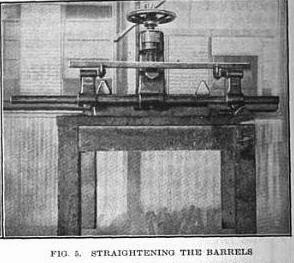 In the above machine, each barrel was tested for straightness by placing it on the rollers as shown in the image above. The screw on the press was used to apply pressure and straighten out the barrel as needed.

We will continue our study of the process in the next post or two.