All About Scopes - IV

In our last post, we studied some details about the reticle inside a scope. In today's post, we will look into some more uses of reticles, namely rangefinding. We had actually dealt with this topic some time ago, when we talked about telescopic sights.

The key to rangefinding in most scopes is to compare an object of known height or width against a series of markings on the reticle, to determine how far away it is. We will see how this works with a few examples. 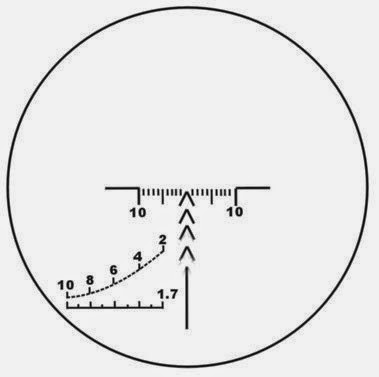 Reticle from a Russian PSO-1 Scope, as used by the SVD rifle. Click on the image to enlarge. Public domain image.

The above image shows the reticle from a PSO-1 scope, which was originally designed for use by the Soviet military Dragunov SVD sniper rifle. When this was originally introduced in 1964, it was the most advanced mass-produced scope available. This scope is a fixed power scope with 4x magnification. It has several markings on it. The top chevron (^) mark is used as the main aiming mark. The horizontal marks (10...10) are used for adjusting for windage and also allow to lead the target, in case it happens to be moving. The horizontal marks can also be used for rangefinding, if the width of the target is known beforehand. Each marking on the horizontal 10..10 marking is spaced at one milliradian interval, therefore the calculation for finding distance can be determined by the following formula:

Also notice the curved line on the lower left quadrant with the numbers (10..2). This can also be used to measure distance to the target, in this case using a human for range finding. The markings assume that an average human is 1.7 meters (5 feet 8 inches) tall. The user simply aligns the scope so that the person's feet touch the bottom horizontal line and see which marking the person's head touches, as shown in the image below: 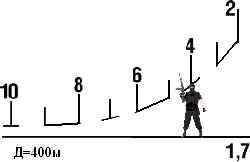 In this case, the person's head touches the 4 mark, which means that the person is about 400 meters away. Using this set of markings, the user can determine ranges from 200 to 1000 meters.

The PSO-1 scope has a bullet drop compensator (BDC) to adjust range in 50 meter increments from 100 meter to 1000 meter ranges. Therefore, once the range to the target is determined, the user can turn the knob and adjust the elevation to correspond to the appropriate range and then align the target with the top chevron mark (^).

Notice that the scope also has other chevron marks (^) below the first one. These are used to shoot at ranges beyond 1000 meters. The user sets the elevation to the maximum of 1000 meters, then uses the other chevrons to line up to 1100, 1200 and 1300 meters respectively.

Now we'll look at another reticle. 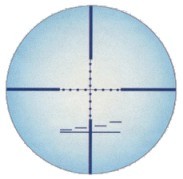 The above reticle is used by scopes made by Schmidt & Bender. Note that the center of the scope has several dots in the horizontal and vertical lines. These are called mil-dots and each dot corresponds to 1 milliradian. Therefore, if the width or height of an object is known, the user can determine the range by counting the number of dots that it covers and then using the same distance formula that we saw above for the PSO scope. Therefore, if an average person, who is about 1.7 meters tall (or 5 feet 8 inches tall), covers 4 dots when viewed in the scope, we can take S = 1.7, mils = 4 and plug it into the formula D = 1.7/4 * 1000, which works out to 425 meters.

There is also another way to quickly compute the range with this reticle, without doing any arithmetic. Note that the bottom of the reticle, there is a long horizontal line and above it are a series of smaller horizontal lines in a step pattern. These lines can be used to quickly estimate the distance to a target, using a human as the scale. To estimate distances between 100 and 250 meters, the user simply frames the target's head between the lines as shown below:

The average human head is around 0.25 meters high. The two lines that best frame the top of the helmet to the chin tell the distance to the target.

For longer ranges, the same horizontal lines can be used, except that the user frames the top of the target's head to the belt buckle between the two lines.

Using this, the user can measure distances between 400 and 1000 meters.

Note that in both these instances, the scopes are fixed power models. Therefore the user cannot adjust the magnification power and the rangefinding calculation is easier.

For scopes with variable power magnification, the method of rangefinding depends on whether the reticle is placed on the first focal plane (FFP) or second focal plane (SFP).

Recall in our last post, we mentioned that if the reticle is placed on the first focal plane, the size of the reticle resizes with the magnification, so if the user zooms into the target, the reticle also appears to enlarge in size correspondingly. So, if a target measures 4 mil dots at 3x zoom, it will still measure 4 mil dots at 10x zoom, when using a FFP reticle. Therefore, for a variable power scope using a FFP reticle, the range calculation formula is the same as that of the fixed power scope, D = S/mils * 1000.

This is why many military scopes use fixed power scopes, to reduce the amount of math calculations that the user has to do, and also avoid the chance that the user makes an incorrect calculation due to not paying attention to the magnification power setting of the scope.