Pyrodex was one of the first successful black powder substitutes and is therefore well known, since it was first introduced in 1975. However, it still retains the sulfur smell of original black powder and produces a lot of smoke and residue and is corrosive as well, just like original black powder. Towards the beginning of the 21st century, newer powders such as Hodgdon Triple Seven (otherwise called Triple Se7en), American Pioneer Powder (originally sold as CleanShot), Shockey's Gold, Black Mag, Blackhorn 209 Goex Clear Shot and Goex Pinnacle (since discontinued) became available on the market. These powders attempted to correct the deficiencies of pyrodex and original black powder. 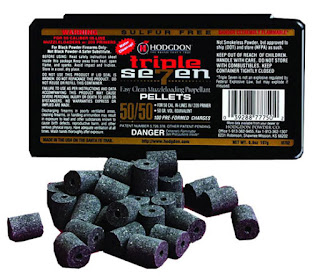 Hodgdon Triple Seven Powder and Pellets. Click on the image to enlarge,

Triple Seven powder is made by Hodgdon, the same people that make Pyrodex as well. It was introduced early in the 21st century and is available in both loose powder and pellet form (Hodgdon owns a patent on the cylindrical pellet). This powder is made using carbon from sources other than wood charcoal and contains no sulfur. Therefore, it lacks the typical sulfur smell of original black powder and pyrodex. Like pyrodex, it is classified as a "smokeless powder" and is therefore not subject to the strict rules and regulations that govern the storage and sale of black powder, which means many retailers are likely to sell it in their stores. It is less dense than pyrodex. Unlike pyrodex, the loose powder form is not "volume equivalent" to black powder, as it is hotter burning and about 15% more powerful. Therefore about 85 grains BY VOLUME of triple seven is equivalent to 100 grains of black powder or pyrodex BY VOLUME. The pellets, on the other hand, are formulated to be equivalent to pyrodex and black powder by volume. In addition to the lack of sulfur smell, triple seven powder is cleaner burning, produces lesser smoke, is less corrosive and easier to clean as well, as it dissolves in plain water. The one thing that some shooters complain about is that triple seven powder tends to form a "crud ring", which is a build-up of a hard crust at the location of where the bullet sits on the powder. However, a quick swab of the bore between shots can easily clean this problem. One more disadvantage is that Triple Seven powder is hygroscopic (i.e. it attracts water from the atmosphere), so it can degrade performance if not properly stored. Triple seven powder is a somewhat expensive compared to pyrodex, but is still a popular alternative. 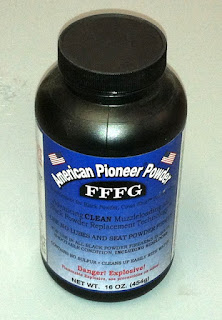 American Pioneer Powder started off life as "Clean Shot". Like Triple Seven, it uses a different formulation (using ascorbic acid) that reduces the sulfur smell and is easier to clean than black powder. Clean Shot Technologies was sued by Hodgdon for infringing on the cylindrical pellet patent and went bankrupt and a new company, American Pioneer Powder, was formed, which now sells powder under the brands of American Pioneer and Shockey's Gold powder. In addition to loose powder, they also sell it in a compressed stick form, as a work-around the Hodgdon patent. Their powders are reported to clean up easier than pyrodex and triple seven, but some shooters report erratic performance.

Black Mag powders are also based on ascorbic acid and uses potassium perchlorate as the oxidizer. They sold powders under the brands Black Mag2 (equivalent to FFg grain size), Black Mag3 (equivalent to FFFg grain size) and Black Mag XP, as well as manufacturing powders for other companies, such as Alliant Black Dot. While they did have quality control issues, if properly made, it produces fairly consistent performance. It is easier to ignite, leaves less residue and far less corrosive than triple seven or pyrodex. Like triple seven, it is also a hotter burning propellant than pyrodex. Unfortunately, there was an accident at the plant that manufactures these powders in 2010 which led to safety violations charges for the owner and in 2013, he was sentenced and the plant was permanently closed. As part of the sentencing, the owner agreed never to resume manufacturing propellants or even conduct any business in the vicinity of a propellant manufacturing facility. 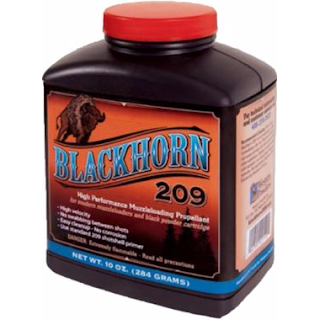 Blackhorn 209 was introduced by Western Powders in 2008. It is much more non-corrosive and cleaner burning than other powders. The 209 indicates that it requires a 209 shotshell primer for proper ignition. Like some of the other powders above, it is also a "volume equivalent powder" (i.e.) it can be measured using the same powder measure as black powder for identical performance. It has excellent performance and unlike most of the other powders above, it is also non-hygroscopic (which means it doesn't attract water from the atmosphere) and therefore has a longer shelf life. It also doesn't form crud or corrosion like the other substitutes and requires far less cleanup as it is low-fouling in nature.