In the 1800s, many people began to realize the advantages of rifling and started to make weapons that included rifled barrels. The problems associated with rifling were that if a bullet was too large, it would be difficult to insert it into a rifle and if it was too small, the gases would escape around the bullet and decrease its range.
The first breakthrough was by one Captain Norton who was stationed in India in the 1830s, who invented the first expanding bullet. He was followed in 1836 by Mr. William Greener, a well known Birmingham based gun-maker, who invented a compound bullet that could expand as it was fired. The British authorities paid little attention to their inventions and one of the reasons they rejected these bullets was because they were not spherical balls

In 1849, a Frenchman named Minie took the same idea and made a compound bullet called the Minie ball. We discussed all these three inventions earlier and the reader is invited to go back to that article and observe the pictures of the various bullets.
These were among the first conical shaped bullets that were used. Until then, the bullets were usually shaped as balls. A few years later, Mr. Joseph Whitworth, the pre-eminent mechanical engineer of his day was contracted to improve the rifle and he realized the value of elongating the bullet. The result was a new rifle that used polygonal bore and an elongated polygonal bullet to go with it: 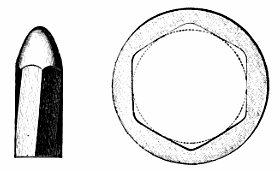 We've also discussed the whitworth bullet in some detail in an earlier article and hence, we will not repeat that discussion here, other than to mention that these new bullets guaranteed better accuracy than the older spherical bullets. As a result of this, spherical bullets went out of fashion and the modern elongated bullet slowly started to gain in popularity.
Posted by The Editor at 12:11 AM