In our last post, we saw how spherical balls were gradually starting to be replaced by elongated bullets, especially since it was determined that elongated bullets could be given more accuracy than spherical bullets, if they were spun about their axis by rifling. Now we will study the development of modern bullets.
Recall that in our discussion about the early bullets, we noted that they were mainly made out of pure lead because the material is easy to shape, cheap, readily available and extremely dense. The problem with lead is that it is also very soft and melts easily. Lead balls performed satisfactorily for a few centuries when gunpowder was low quality and velocities of the bullet were not that high. However, as the gunpowder quality and power began to improve and as the bullets began to fit the gun barrel more tightly, the velocity of the bullet began to increase and the pressure and temperature in the barrel was also higher. The temperature of the bullet would rise not only because of the hotter burning gunpowder, but also due to the friction generated by rubbing against the barrel. This meant that the lead bullet had a good chance to melt and deform due to the extra temperature and pressure. This would cause the bullet to leave a good bit of lead behind inside the barrel and it would have to be cleaned often. The deformation of the bullet would also cause a loss of accuracy.
One solution that we've already seen when discussing the manufacture of shotgun pellets earlier, is to add a bit of antimony to the lead. This increases the hardness of the lead alloy and makes it resist higher pressures.
However, adding antimony did not solve matters much, especially after more powerful gunpowders such as cordite came out. The bullet would be stripped due to the rifling and the lead would deposit on the inside of the grooves, making the weapon useless very quickly.
The next solution was invented by Lt. Colonel Eduard Rubin at the Swiss Federal Ammunition Factory and Research Center in Thun, Switzerland in 1889. His solution was to make a thin outer layer of copper which would be filled on the inside with lead. Since copper melts at a higher temperature than lead, is harder than pure lead and has a specific heat capacity higher than lead, the outer layer prevents the bullet from getting deformed too much. The inner layer of lead adds to the weight of the bullet. Such a bullet is called a jacketed bullet. The jacket may extend throughout the front and sides of the bullet, in which case it is called a full-metal jacket (FMJ), or it may only extend around the parts that fit tightly around the barrel and the tip may be of softer material, in which case it is called a soft-point bullet.
Note that the jacket is not always made of copper these days. Cupro-nickel and other copper alloys, steel and gilding metal are all commonly used these days. Nylon and other synthetic materials were also tried out without much success.
Note that a pure lead bullet expands on striking the target because the lead in the back mushes the lead at the front of the bullet and thereby causes much more damage to the target after it expands. A full-metal jacket bullet does not expand much on striking the target, because of the jacket constraining the target, hence there is generally less tissue damage. On the other hand, the harder jacket allows it to penetrate further into the target. One way to counteract the lack of expansion is to unbalance the bullet (make it heavier at the back) so that when it hits the target, it yaws in different directions as it penetrates the target. This is done by making the front of the bullet of lighter material, such as aluminium instead of lead.
A soft-point bullet expands when it strikes the target, since the front of the bullet is a softer material. Hence it generally causes more tissue damage than a full metal jacket bullet. However this expansion is limited by the outer jacket as well.
Another solution is to make the jacket cover the entire bullet, but make the tip of the bullet hollow, so that it expands when it hits the target. These bullets are called hollow point bullets or Jacketed Hollow Point (JHP). They were first manufactured in 1890 in a factory in Dum Dum, West Bengal, India and hence these bullets are also known as "dum dums." These bullets were quickly outlawed for military use by 1899, but they can be used by civilians and are used by hunters in many parts of the world.

GFDL licensed image from wikipedia.com
The above illustration shows three modern cartridges. Note how tapered these bullets are. The one on the left of the picture is a hollow point, as can be seen by the hollowed out shape at the tip. The bullet in the middle is a full metal jacket bullet. The one on the right is a soft-point bullet. Notice the tip of the soft-point is of a different color than the rest of the bullet, because it is a different metal.
As you may have noted above, the bullets of the three cartridges are extremely pointed This innovation in bullet design came from the French in 1898 for their Lebel 8 mm. rifle. They made the tips of their bullets more pointed, to improve the aerodynamic characteristics of the bullet and increase its range. Shortly after, the Germans copied the same idea in 1905 and called their bullets Spitzgeschoss or "pointed bullet". This gave rise to the term spitzer bullet, which is the generic English term for any bullet with a pointed tip. This concept was rapidly adopted through-out the world and now, virtually every country uses spitzer type bullets for rifles. 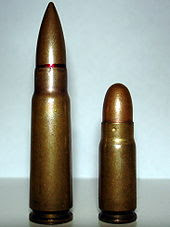 GFDL licensed image from wikipedia.com
In the above image we see two types of cartridges. The one on the left is a rifle cartridge that operates at higher velocities and hence it has a spitzer-type pointed bullet. The one on the right is a pistol cartridge. As you can see, it is a shorter cartridge and has a bullet with a rounded tip. This shape does not offer as much range or penetration as a spitzer-type bullet, but it is optimized for reliable feeding in an automatic pistol.
Posted by The Editor at 12:31 AM