In our last post, we looked at some spurious guns that were sold as though they were products manufactured by reputable British manufacturers. We will continue the discussion in this post.

Reputable British manufacturers were not the only ones harmed by unscrupulous manufacturers. The practice also covered some US manufacturers as well. For instance, Parker shotguns were a well-known American brand from the 1870s to 1942 and their products were once described as "America's finest shotguns". The company was founded by one Charles Parker in Connecticut. However, any shotguns marked "C. Parker" are not made by the Parker company, but are actually cheap Belgian fakes. 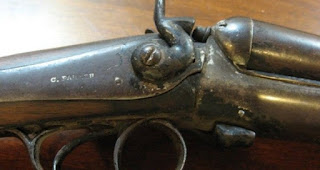 Similarly, the Henry repeating rifle gained a lot of fame during the American civil war and was one of the first reliable lever-action rifles and a precursor to the Winchester Model 1866 repeating rifle. The Henry rifle was made by the New Haven Arms Company of Meridien, Connecticut, which was later renamed to Winchester Repeating Arms Company, when they started making the Model 1866. However, firearms labelled "Henry Arms" had nothing to do with either of these companies. The "Henry Arms" firearms were either manufactured by Crescent Firearms of Norwich, Connecticut, or by Belgian manufacturers such as Anciens Establissments Pieper or F. Dumoulin. 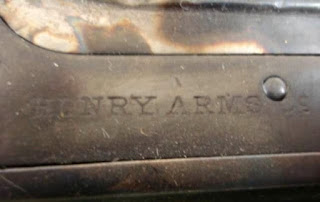 A "Henry Arms" rifle. Click on image to enlarge.

In the same category, we have brands like Sam Holt (sounds like Sam Colt), T. Barker, Barker Bros (both intended to be confused with Parker Bros) etc., all of which were made by Belgian manufacturers.

Some of these firearms are quite reasonable quality, but they're definitely not high-end firearms and will also not hold up to pressures generated by modern gunpowder loads.