What is a Best Gun?

Some readers may have heard the term "best gun" being used sometimes, especially in older books. So what is this "best gun" and what is it better than? We will study all about that in this post.

It turns out that the term "best gun" doesn't necessarily mean what you think it means. It is actually used to describe a very specific type of firearm in the industry. A "best gun" is a double barreled shotgun usually with side lock actions, a specific style of stock, intercepting sears etc. It should have a high quality of workmanship and finish and is usually a top-grade gun model that is offered by the manufacturer. It is intended to compete with other manufacturers products in factors such as quality, workmanship and finish, not on price. Many of these "best guns" are custom made for a particular customer, as can be seen in the video we saw earlier in the making a custom shotgun post. Such customers are willing to pay the extra price to have a high quality product made by highly skilled craftsmen. They are not only high quality products, but literally works of art as well.

Some of the most famous "best guns" were made by British manufacturers, such as Holland & Holland, J. Purdey & Sons, W.W. Greener, Westley Richards, Boss & Co., Joseph Lang etc. These manufacturers pioneered the standards in the mid 1800s for what is regarded as a "best gun" today and many of them are still in business currently. To this day, a "London Best" quality firearm is regarded as one of the highest quality firearms made and is usually one of the most expensive shotguns around, some costing more than the latest Ferrari or Lamborghini sports car! Even used "London Best" shotguns are expensive. 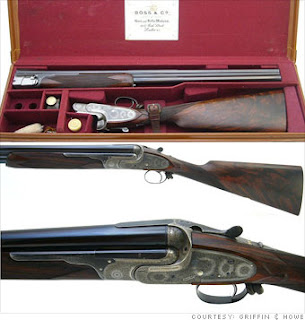 The above example is a shotgun manufactured by Boss & Co. in 1925. The gun is a 12 gauge double barrel shotgun with barrels arranged one over the other (known as "Over/Under" or "O/U" type). This is currently worth about $50,000 today. 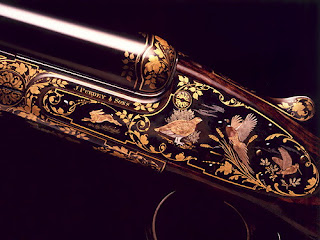 The next example we have above is a modern shotgun made by J. Purdey & Sons. While they used to produce different grades of firearms over the years, they currently concentrate on producing very high-end firearms mainly. Purdey's basic price for a entry level shotgun is $52,000 and a double barreled "best gun" starts at $90,000 or so and additional engraving and inlays such as those in the image above can add tens of thousands of dollars to the price. The current master engraver, Ken Hunt,who started as an apprentice at Purdey in the 1950s and is now an independent artist, charges $90,000 for his work alone and only does 4 guns a year currently. The fit is incredibly precise to about 1/1000th of an inch tolerance. It takes 500 hours or more to produce one shotgun and Purdey produces only about 100 guns a year currently.

While London is known for its "best guns", they are also made in other places around the world. We will take a look at these in future posts.
Posted by The Editor at 3:07 AM