In the last couple of posts, we looked into the concept of set guns. In this post, we will look at some guns that were used for hunting. Such weapons were called Trap Guns.

Set guns have been used for hunting since the 1700s, but these guns were mostly home-built jobs and were usually built using damaged or obsolete firearms. In the 1800s and early 1900s, when fur trapping was at its zenith, well known companies started to get into the business of building custom trapper guns. Some of these companies include Getsem Gun Company of Lincoln, Nebraska and FC Taylor Fur Company of St. Louis, Missouri. In the early 1900s, a large part of America was still heavily forested and many trappers would get their supplies from St. Louis before heading off to the wilderness.

A man called Charles D. Lovelace had patented a set-gun design for trappers in 1905 and established a company called the Texas Firearms Company to sell them. 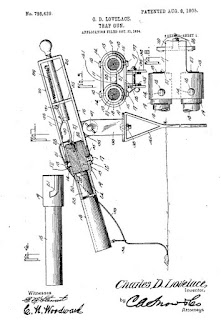 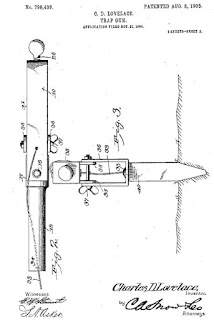 
The rest of his patent application may be viewed here. The FC Taylor Fur Company bought his design patent and started to sell it as the Taylor Fur Getter.

The Taylor Fur Getter. Click on image to enlarge.

The rifle itself was made under contract for Taylor by Mossberg, a well known firearms manufacturer. Operation of this weapon was simple. Simply stake the weapon into the ground via the large screw thread in the bottom. Then adjust the angle of the weapon depending on the animal to be hunted (racoon, possum, mink, coyote etc.) and put a bait item on the hook. Then cock the weapon, pull the safety and go hide somewhere. When the animal takes the bait, the trigger discharges and the animal is usually shot in the head. This and the fact that this firearm uses a small 22 caliber round ensure that it doesn't damage the animal's pelt as much as possible.

Taylor also made a larger version of this called the "Taylor Sure Shot". 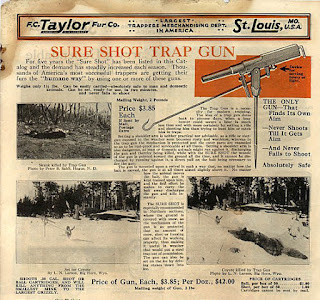 The Taylor Sure Shot Trap Gun. Click on image to enlarge

This was used for larger game such as bears and wolves and fired a .38 caliber round. The firearm itself was manufactured under contract for Taylor by Hopkins and Allen, another well known firearms manufacturer.

These guns continued to be sold for $3-$4 each until 1934, when the new Federal Firearms Laws of 1934 made it illegal to own these, because they had no stock or hand-grip and were therefore classified as sawn-off shotguns. These days however, these items are deemed as historic relics and collectors items and it is legal to possess them as collector items. The FC Taylor company has also survived to this present day and is now part of the Sterling Fur and Tool Company of Ohio.