What is a STANAG magazine?

In our last article, we looked at what the deal about teflon-coated bullets was about. In this next post, we will look into STANAG magazines. So what's the big deal about STANAG magazines and why are they called that anyway? This article aims to clear all that up. 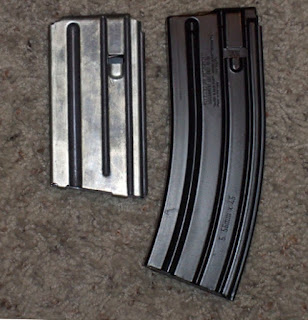 Two STANAG compatible magazines. Left is a 20 round magazine made by Colt, right is a 30 round "High Reliablility" magazine made by Heckler & Koch/
Click on image to enlarge.
Image licensed under GNU Free Documentation License v 1.2 or later, by user Raygun on wikipedia.

Back when NATO was first formed, they agreed to develop a set of common standards that all the member countries could use, in order to ensure that the various countries under the NATO umbrella could share arms and ammunition. These standards were called STANdardization AGreements, or STANAGs for short and many were published for various military hardware. We start our story in 1980, soon after NATO had standardized on using the NATO 5.56x45 mm. cartridge for their assault rifles. STANAG 4172 was the document that specified the standards for the NATO 5.56x45 mm. cartridge.  Soon after this, STANAG 4179 was proposed, which described the standards for how the magazines were to be made. Now for the real amusing part: STANAG 4179 was a document containing a proposed standard for magazines, but was never officially accepted by all the member countries and therefore remains as a "Draft STANAG" to this date! Therefore, calling these magazines as "STANAG compatible magazine" is not technically correct.