Two posts ago, we studied details of the Bessemer process, which revolutionized the production of steel and dropped the price of steel to be comparable to that of iron. Today, we will study another process that was developed to complement the Bessemer process. This process is called the Open Hearth Process, or the Siemens-Martin Process.

As we noted two posts ago, the Bessemer process is a very fast process and converts iron to steel in around 20 minutes or so. One problem with this is that it is very hard to control the carbon content precisely, because it is not possible to sample the molten metal at an intermediate stage. Also, the output is less homogenous and could have blowholes and cracks in it (and we saw one way to fix this problem in our last post on fluid compressed steel). The Open Hearth process fixes some of these issues.

The origins of the Open Hearth process go back to the work of Carl Wilhelm Siemens, a German engineer, who moved to England and changed his name to a more British sounding name: Charles William Siemens (and later, he was knighted and called Sir William Siemens). Carl Siemens was the younger brother of Ernst Werner Siemens, the famous German inventor of numerous electrical technologies and later, a co-founder of Siemens AG, the German telecommunications and electrical company. They came from a large family of 14 children and when both parents died, the older brothers took responsibility to support their younger siblings education. Ernst Siemens had shown early interest in electricity and worked on improving existing technologies. One of his early inventions was a better method of electroplating gold and silver onto metal items. Meanwhile Carl Siemens had just finished graduating as a mechanical engineer and the brothers were wondering how to support their younger siblings, so they decided to earn money by licensing Ernst Siemens invention to a British company. Since Carl Siemens had studied English in school and spoke it better than his brother, it was decided to send him to England to act as his brother's agent and market his patent there. Carl Siemens moved to England in March 1843 and liked it so much that he made England his new home. Since he was also an engineer at heart, he liked to devote his spare time to various researches.

One of Carl Siemens early subjects of research was how to improve the efficiency of furnaces and he came up with the concept of a regenerative furnace in 1857. The idea is to use some of the heat from the exhaust gases to preheat fresh air coming into the furnace. This allows the furnace to use less fuel overall. The initial furnaces that Siemens built were used for glass-making and his idea saved about 70-80% of the fuel that was previously used. By the early 1860s, he had built a small factory to produce wrought iron from iron ore and pig iron using his regenerative furnace. In 1865, a French engineer named Pierre-Emile Martin, licensed the Siemens regenerative furnace patent and modified it to be used to make steel and he started a small factory in France. After this, Siemens used Martin's modifications and set up a small steel manufacturing plant in Birmingham in 1866 and later, a larger factory in Swansea in 1869,that produced about 75 tons of steel a week. By 1870, the open-hearth process was perfected and called the Siemens-Martin process after its inventors.

To understand the process, we must first understand the principle of a regenerative furnace. The furnace has at least two chambers, one on either side of the main hearth. The furnace has dampers to regulate the direction of the flow of air and flammable gas. The air and gas are allowed to flow in one direction through one of the chambers, then they are mixed together, ignited and allowed to pass over the hearth, thereby transferring some of the heat to the iron ore to be melted. As the hot gases leave the hearth and move towards the chimney, they are transferred to another chamber lined with fire bricks, where some of the heat of the exhaust gases are transferrred to the bricks. After about 20 minutes, the flow of air is reversed by turning the dampers, therefore the air comes in through the hot chamber and is preheated before it is mixed with the flammable gas. This allows more heat to be produced in the hearth and the hot exhaust gases are piped through the first chamber, heating the bricks in it as well. Every twenty minutes or so, the direction of the air and flammable gas are reversed. This method allows the temperature of the furnace to be hot enough to melt steel. 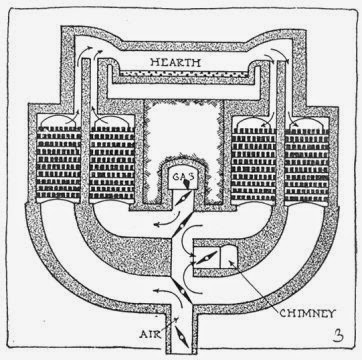 A regenerative furnace. Click on the image to enlarge. Public domain image.

The contents of the hearth may be loaded with scrap steel, sheet metal, pig iron, construction steel, iron oxide (rust) etc.  Once the steel is melted, slag forming agents such as limestone can be added to remove the impurities. The slag floats on top and can be removed when the furnace is tapped. The oxygen in the air burns off the excess carbon in the steel. If more carbon or other elements are needed, they can be added after the molten steel is tapped from the furnace. In the early days, this was not an easy process. According to one US worker from 1919, he described this process as follows: "You lift a large sack of coal to your shoulders, run towards the white hot steel in a hundred-ton ladle, must get close enough without burning your face off to hurl the sack, using every ounce of strength, into the ladle and run, as flames leap to roof and the heat blasts everything to the roof. Then you rush out to the ladle and madly shovel manganese into it, as hot a job as can be imagined!"

Unlike the Bessemer process that can only work with pig iron, this process can use scrap iron, scrap steel and waste metal, as well as pig iron, in the hearth. The Siemens-Martin process is much slower than the Bessemer process and takes about 8-10 hours to complete, but it has some advantages as well. For one, a small sample of the molten metal can be taken out of the furnace and allowed to cool and then taken to a lab for testing, to make sure the carbon content is perfect. The long heating process makes the content of the steel more homogenous than steel produced by the Bessemer process. It is not necessary to remove all the carbon at first, like the Bessemer process, as the longer time of the Siemens process allows the operators to precisely control the carbon content and they can stop it when the required amount of carbon has burned off. This process also allows recycling of scrap steel. One more nice thing is that steel from different sources (with different amounts of carbon content) can all be combined into a single furnace and converted to a new steel with the given amount of other elements in it. Since scrap steel and old sheet metal are often obtained for cheap, the cost savings is considerable. Also, this process allows people to recycle old worn out steel, such as old rails, construction steel beams, scrap metal from junkyard car bodies etc., instead of paying to dispose of the junk. In the Bessemer basic process, the phosphorus remains in the liquid metal until the carbon is all burned off, but in the open hearth process, much of the phosphorus is removed earlier on in the process. When steel of a uniform character is desired, the open hearth process is preferred, but if large amounts of steel  are required quickly, then the Bessemer process is used.