In our last post, we studied the invention of the Siemens-Martin process to make steel. In today's post, we will study a type of furnace that was invented in the early 1900s, gained popularity around World War II and is still in use today. We are talking about the electric arc furnace.

The idea of electric arcs was first demonstrated by Sir Humphry Davy in 1810 in England and several people after him tried experiments and patented processes in the 19th century, including Carl Wilhelm Siemens, who we read about in our previous article. However, the first successful electric arc furnace was due to the Frenchman, Paul Heroult, in 1900. He was later invited to the United States in 1905, to set up furnaces for American companies, such as US Steel and Halcomb Steel. The process really gained popularity during World War II and afterwards, because of the low costs associated with setting up an electric arc furnace, compared to a complete integrated steel mill. 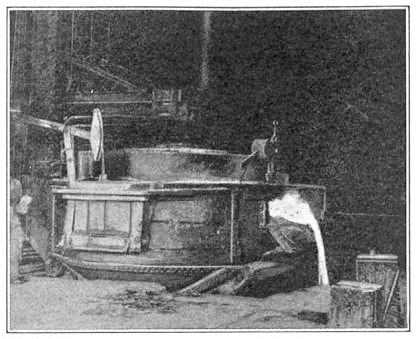 The furnace is a kettle made with a dished bottom, mounted so that it can be tilted forward and drained. The kettle is lined with fire brick which can withstand very high temperatures. There are doors on either side to put in raw material and the front has a spout to pour out the molten steel. The roof of the furnace is a dome lined with firebrick and has two or three carbon electrodes in it.

Electric furnaces are typically charged with scrap steel, though they may also be used with hot pig iron directly from a blast furnace. Usually though, scrap steel is used. The scrap is prepared based on the grade of steel to be made and the scrap pieces are arranged so that large heavy pieces of scrap metal don't lie in front of the burner ports. Some lime and carbon may also be added at this stage, although more may be injected at a later stage. After the charge is put in the furnace, the roof is lowered on the furnace and an intermediate amount of electricity is sent through, to start the electric arc, until the electrodes bore into the scrap sufficiently. Usually, light scrap is placed on the top of the pile to accelerate the bore-in process. After a few minutes, the electrodes melt enough of the scrap that they can be pushed deeper in and the high voltage can be fed in without fear of electric arcs hitting the roof of the furnace. As the furnace heats up, the electric arc becomes stable and starts melting the material. At this point, air (or oxygen) may be fed into the furnace to burn up the carbon, silicon, manganese etc. and form steel. More carbon and limestone and other elements may be added at this stage to form the steel.

As we have studied before, phosphorus and sulfur tend to weaken the steel and must be removed. As it turns out, the conditions favorable to remove phosphorus are opposite to those favorable to remove sulfur and vice versa. As a result of this, there is a chance that one of these elements may revert back into the steel from the slag, if proper steps are not taken. Therefore, the phosphorus removal is carried out very early on in the process -- while the temperature is still relatively low, the furnace is tilted to pour out the initial slag formed, which gets rid of much of the phosphorus. If this high phosphorus slag is not removed early on, it will revert back into the steel later on. Then the furnace continues to be heated, and more slag formers are introducted to remove the other elements, such as silicon, sulfur, calcium etc. 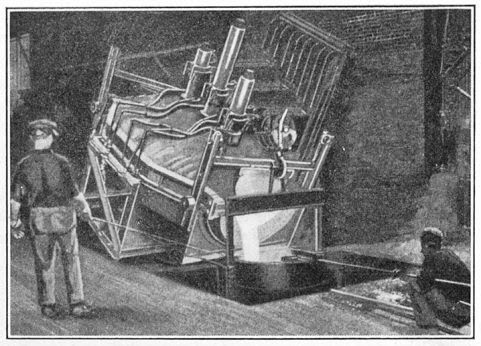 The molten metal is analyzed via a spectrometer to make sure that the carbon content and oxygen are correct. Once the correct temperature and chemical contents are achieved, the steel is tapped out as shown in the illustration above. At this point, beneficial alloying elements such as nickel or vanadium may be added to the tapped metal stream.

After all the metal is tapped out, the solid slag is cleaned out of the vessel, the electrodes are checked for damage and the new charge is prepared to be introduced into the vessel. The entire process of preparing a charge, melting it, tapping it, cleaning out the vessel and recharging it, takes about 60 minutes on a medium-sized furnace (capacity of 90 tonnes or so).

Electric arc furnaces can range from really small sizes suitable for research labs to large ones capable of working with 400 tons of metal at a time. The nice thing about them is that they can work with 100% scrap metal, which means they are very handy for recycling old steel, which can be bought for far cheaper than iron ore. They can easily be started and stopped, unlike other furnaces. They are also very energy efficient, compared to methods that make steel from raw iron ore. They can produce very high grade steel from cheap and impure metals and even better than the Siemens-Martin process. Since they run at higher temperatures, they allow the operator to make slags that are normally difficult to melt, but useful to remove small traces of impurities. They can be used for superior stainless steel alloys as well. Nucor, one of the largest steel manufacturers in the US, uses electric arc furnaces a lot, because it allows them to put up smaller mini-mill plants near where the steel is needed and they can vary production quickly, depending on the demand.

Electric arc furnaces are also used as part of the process in vaccuum arc remelting (VAR), which is used to produce specialty steels. In this process, the steel is first melted in an electric-arc furnace and then alloyed in an argon oxygen decarburizing vessel and poured into ingots. Then, the ingots are put into another container and the air is removed from it to form a vacuum. An electric arc is used to remelt the steel, since the arc can form without the need for oxygen. Any dissolved gases (such as nitrogen and oxygen) escape out under the vacuum conditions, as do elements such as sulfur and magnesium, which have high vapor pressure. The molten steel is solidified at a controlled rate, using a water jacket around the vessel to control the cooling rate and ensure uniformity.  It is known that the VAR process is used to produce 9310, 4340, Aermet 100 and maraging steels, which we studied earlier when studying steels used for rifle barrels, bolts and firing pins at the start of this series. The process can also be used to produce titanium, which is also sometimes used in the firearms industry, as we studied before.