The term "lock and load" is often seen in war movies, especially in scenes with firearms, where a sergeant gives the command to "lock and load" to the troops under him. So what does this phrase mean and what is the origin of it?

The command "lock and load" means to prepare the firearm for firing and put it in condition 1 (i.e.) a loaded magazine is inserted, there is a round in the chamber and the weapon is cocked, but the safety devices are enabled.

So, should the term be "load and lock" or "lock and load" then? Well, it appears that the reason "lock and load" entered into military jargon is because of the M1 Garand rifle.

In the M1 Garand, to load the weapon, the user first pulls the bolt back and locks it to the rear, and enables the safety in front of the trigger guard. If the bolt is not locked to the rear, it may slam back shut. Once the bolt is safely locked back and the safety is enabled, an en-bloc clip containing 8 cartridges is loaded into the magazine through the top. 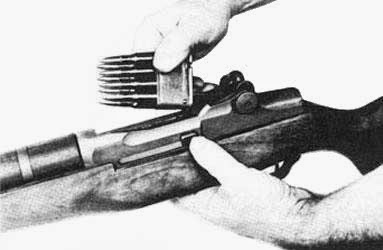 
When the clip is pushed in, the bolt snaps forward on its own (and if the user is not careful, it may slam into his/her thumb. A common injury among US military personnel was the "M1 thumb"). Once the bolt slams forward, it strips the top cartridge from the clip and the weapon is now loaded. This completes the "lock and load" procedure. The user only needs to disengage the safety and the weapon is ready to fire.

The first time this phrase appeared in a movie was in "Sands of Iwo Jima" starring John Wayne. Since then, the phrase has appeared in many movies (e.g. Saving Private Ryan, Full Metal Jacket etc.) and has become well known in popular culture. It is still used even when the weapon in question is not a M1 Garand. For example, in a M-16, on hearing the command "lock and load", a user pulls back the charging handle and locks the bolt in place, enables the safety, inserts a magazine into the rifle and then pushes the bolt release button to close the bolt.

So why does the procedure enable safeties during the lock phase and before the loading phase. Well, this is because the US military develops its procedures to accommodate all sorts of soldiers, including those who may never have handled a firearm before. As they say, it is better to be safe now than sorry later.