In today's post, we will look at a class of weapon called snubnose revolvers, also sometimes called "belly guns" or "snubbies".

A snubnose revolver is a handgun that is designed for self-defense at short distances. In general, the term is used to refer to any revolver with a barrel that is 3 inches long or shorter. They were designed to fulfill the requirement of a small repeating handgun that could be concealed easily and drawn out quickly. The term "belly gun" might have come about because many people carried these weapons concealed in the trouser waist band, close to the belly. Other think that they're called belly guns because of the method of use: placing the barrel into the belly of the opponent and pulling the trigger. 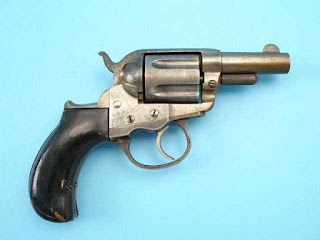 In those days, Colt revolvers were side-loaders. In 1894, Smith & Wesson invented a revolver where the cylinder is mounted on a crane which can swing outward for unloading or loading the revolver, with an attached push rod and star ejector to easily extract the cases. This design, along with the double action mechanism is what we see today in many modern revolvers. 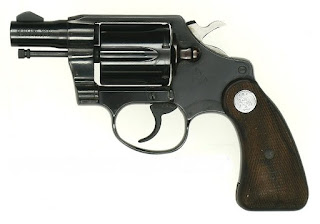 A Colt Detective Special, courtesy of http://www.adamsguns.com/. Click on the image to enlarge.

The new weapon immediately found popularity among police detectives who were tasked with missions that required them to dress like civilians. Soon after this, Colt discovered that there were a number of people that wanted a small concealed weapon. Therefore, they started making other models as well. For instance, the Colt Banker's model was based on the earlier Colt Police Positive revolver. The Colt Police Positive was designed for smaller cartridges (.32 Colt and .38 S&W) than the Colt Police Positive Special (which took .38 Special) and the Colt Banker's model was designed for the smaller cartridge, with the reasoning that weaker bankers wouldn't be able to handle the recoil of a .38 special cartridge.

The nice thing about such small revolvers is that they are easy to carry around in a pocket or a purse and have repeating capability. Another reason that many people preferred these to the larger models was because of the speed that these could be pulled out. Anyone who has used a full sized revolver from a holster knows that the gun is relatively heavy and the long barrel has to be pulled clear of the holster before shooting. The snubnose equivalent is much easier to pull out from the same holster.

After cheap semi-automatic pistols started becoming widely available in the early 1980s, the popularity of these revolvers declined in the US, mainly because pistols hold much more ammunition that revolvers do. Then, in 1994, the Federal Assault Weapons Ban passed for 10 years, which limited the availability of pistol magazines holding more than 10 rounds and suddenly, the popularity of these snubnose revolvers increased again, until the ban expired in 2004.

There are some advantages to snubnose revolvers:


On the other hand, there are some disadvantages as well:
Due to their shorter barrel lengths, snubnose revolvers are perceived to have less accuracy than weapons with longer barrels. This is not entirely true, as they can be used pretty effectively to about 20 meters (22 yards) by most people and some people can even hit torso-sized targets up to 50 meters (55 yards) away.