In our last couple of articles, we studied some sports where shooting formed a part, but those sports also involved other activities (running, skiing etc.) In today's post, we will study a sport where shooting forms a larger component. This sport is not an Olympic sport unlike the other two we studied before, but is popular in North America. We are talking about the three gun competition, otherwise spelled as 3-gun competition.

In the 19th and most of the 20th century, shooting competitions generally meant people were in fixed positions and shooting at targets with a single weapon. In these competitions, sometimes the targets are at a fixed known distance (e.g. pistol shooting, rifle shooting, biathlon, pentathlon etc.) and sometimes the targets move (e.g. trap shooting, skeet shooting etc.) However, the user stays in a fixed position and shoots at the targets. In some of these shooting events, e.g. pistol shooting or rifle shooting, time is not considered a huge factor (as long as the shooter stays below some fixed time limit). Reloading time also is not considered in these events and people generally have plenty of time to reload. Target types also stay the same throughout the competition (e.g.) pistol shooters always shoot at paper targets, trap shooters always shoot at clay targets etc. Another point about shooting competitions like this is that people generally become good at one type of firearm (e.g.) pistol, but aren't so good at using another firearm type (e.g.) rifle. 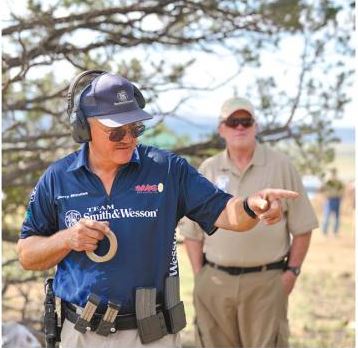 Three-gun competitions are a newer type of shooting competition that was started in 1980 by Soldier of Fortune magazine and gained popularity in America soon afterwards. Unlike the other competitions, the three gun competition is designed to simulate combat or self-defense scenarios. Shooters are expected to use three types of firearms in this type of competition:

Shooters proceed through an obstacle course and shoot at a variety of targets along the course, using different firearms at different stages through the course. The targets are all at varying distances from 1 meter to 500 meters or so, and are a variety of types (clay targets, paper targets, steel targets, empty cans, silhouettes, moving targets etc.). Shooters also engage these targets in a variety of positions (standing, kneeling, prone etc.) Shooters also carry firearms, holsters, spare magazines and ammunition with them and load and unload magazines as they proceed through the course. There are some rules such as the minimum calibers that can be used (handguns must use at least 9x19 mm. cartridges, rifles must use at least 5.45x39 mm. cartridges, shotguns must be larger than 20 gauge), types of sights, types of stocks, magazine capacity limit etc. but any firearm that meets the minimum requirements is allowed. Targets also have different zones that score more points if hit. In addition, if a heavier bullet is used, then more points are awarded for some targets, on the grounds that a competitor using a heavier recoil weapon isn't at a disadvantage against someone using a firearm with little recoil (in many competitions, .223 and 9 mm. are considered minor calibers and score less, whereas anything over .308 or .45 ACP are considered major calibers and score more for hits). In addition, unlike other shooting competitions, 3-gun competitions also feature targets that are supposed to be ignored by the shooter.

Competitors score points by hitting targets in specific areas and lose points by hitting the "no-shoot" targets (e.g. hostages, friendly targets etc.). Competitors also lose points for procedural penalties, such as shooting too close or too far from the target, knocking overhead material over while crawling through a tunnel, not performing a mandatory reload, using the wrong firearm type at a target etc. The time taken to complete the course is also factored into the final score. Therefore, the winner is decided by a combination of fast time and shooting accuracy. Competitors may be disqualified for safety violations, such as accidental discharges or unsafe firearm handling.

For firearms, competitors generally use a 9 mm. or larger pistol for the handgun stages, an autoloading or pump-action shotgun (commonly 12 gauge) and an AR style semi-automatic rifle. There are various divisions of 3-gun competitions: Limited, Tactical, Heavy Metal (He Man), Open and Outlaw. The difference between these divisions is generally the types of equipment used. For instance, in limited division competitions (which is for entry-level shooters), the rifle is allowed an unmagnified red dot, whereas in the tactical division competitions, a magnified optic is allowed. For the heavy metal division, the rifle must be at least .308 (or 7.62x51 mm.) or larger, the shotgun must be at least 12 gauge and the handgun must be at least .45 ACP or larger, and all sights should be ordinary iron sights with no optics allowed. The different divisions allow poorer shooters with inferior equipment to participate in these events as well. The majority of shooters tend to participate in the tactical division of a 3-gun competition.

Here's a video from the National Shooting Sports Foundation, showing how the three-gun competitions work:


Courses for 3-gun competitions have to meet some basic minimum standards, but beyond that, they are pretty much left to the match organizers' imaginations. This is why every competition is different. In some places, competitors are generally given a few minutes to walk through a course to familiarize themselves and form a plan of how they are going to proceed through it. In other places, the courses may be run blind (i.e.) the shooters do not know what to expect beforehand. Some competitions feature multiple stages with different courses at every stage and people get bonus points for winning a stage or finishing near the top, therefore a person who did well on every stage, but did not win any one of them, can still end up winning the overall competition.

Here's a couple of videos by Mr. Nick Leghorn showing a competition with multiple stages.

Happy viewing
Posted by The Editor at 11:45 PM