The History of Saltpeter - IX

In our previous post, we looked into some early history of saltpeter and gunpowder in England, until the reign of Henry VIII. We will now study some further developments under his daughter, Queen Elizabeth I. 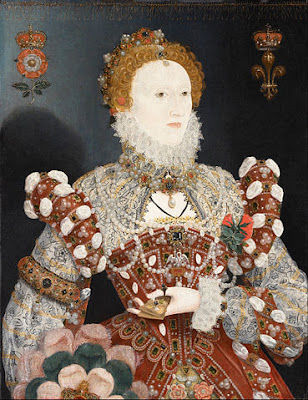 Queen Elizabeth I of England. Click on the image to enlarge. Public domain image.

Elizabeth was the daughter of King Henry VIII, but she was not the immediate ruler after his death in 1547. Instead, Edward VI, her half-brother, became king for a few years (1547-1553), followed by his cousin, Lady Jane Grey (only 19 days in July 1553) and then, her half-sister, Queen Mary I (1553-1558) who died of natural causes. After Elizabeth succeeded her half-sister Mary and became Queen Elizabeth I in 1558, her new secretary of state was Sir William Cecil, who had also served in the same role earlier for her half-brother Edward VI in 1550. This is the same William Cecil who was mentioned in our last post, who later became Baron Burghley.

At this time, England was still mostly importing saltpeter and gunpowder from other places in Europe, and during the first few weeks of Elizabeth's reign, the amounts of saltpeter and gunpowder available in England were greatly reduced. Fearing that other powerful European rulers (such as the French king, the Spanish king, the Portuguese king, the Hapsburg dynasty etc.) could attempt to invade England soon, William Cecil started working with Elizabeth's Council of ministers to build up England's stocks of gunpowder and saltpeter on an urgent basis.

To do this, they went to dealers of saltpeter in Europe. The problem was that the same people who sold saltpeter to the British, were also selling it to the other European rulers (the French king, the Spanish king, the Hapsburgs etc.) as well. Therefore, William Cecil advertised that England was willing to pay higher prices for saltpeter and gunpowder than anyone else, and was perfectly happy to encourage smugglers to supply them. Of course, there was the danger of the supplies being intercepted by the other countries, so he contacted as many dealers as possible, to ensure that there would be multiple sources. Pretty soon, Italian, Flemish, Dutch and English merchants were all supplying England. Cecil sent his agent, Sir Thomas Gresham, to Flanders, Germany and Netherlands, to talk to dealers in those regions and buy everything that they had. By 1660, Sir Thomas Gresham had obtained over 200 tons of saltpeter, enough to take care of England's needs for at least two years, but the quest for more saltpeter did not end there. Gresham's people went to Hungary, Bohemia, Russia and Denmark to get more supplies. England even traded as far south as Morocco and the Persian empire, exchanging timber and iron cannon balls for saltpeter. Of course, much of this had to happen in secret, so that the other rulers would not know how much gunpowder England had. Sir Thomas Gresham prophetically wrote to the Queen in 1563, that '£20,000 of saltpeter would be more useful to her than £100,000 in gold'.

At the same time, England also tried to jumpstart their own local production of saltpeter, reasoning that this would reduce their reliance on foreign suppliers and hostile countries stopping ships from reaching England. They also argued that local manufacturing would be cheaper and of better quality, as well as creating local jobs. William Cecil was already aware, through his agents, that some German states had developed techniques to produce saltpeter plantations, and he sought to import this knowledge to England. At the same time he was setting up to import supplies from an Italian merchant in 1561, he also found a German engineer, Gerard Honrick (or Hoenrich), who was willing to transfer the technology for £300. Honrick talked about his method of mixing earth with urine, horse dung and lime and then refining and crystallizing it to produce saltpeter. We already discussed his methods some time earlier, so we will not repeat those details here again.  Honrick envisioned a system where vast nitre beds would be set up to supply centrally located factories to refine and extract saltpeter. However, two months later, he was complaining that England hadn't paid him for his transfer of knowledge.

Instead, the British government granted an exclusive 10 year license to a pair of British merchants, Cockeram and Barnes, to supply them with saltpeter from England. As part of the license, they were granted the power to dig anywhere they like. Of course, instead of working on any sort of saltpeter plantation technology, Cockeram and Barnes were quite content to dig in other people's lands, just like the saltpeter men of old. While there were many attempts made to develop saltpeter plantations, the majority of England's supply simply came from saltpeter men searching around England and digging up other people's property. Other experts, such as Leonard Engelbreght of Aachen and the Flemish merchant, Cornelius Stephinson, attempted to set up saltpeter beds in England at different times, but most of these efforts proved unsuccessful. Instead, England became more reliant on saltpeter men searching through various places in England to find natural supplies and licenses to dig were granted to more people. It is interesting to note that when the Spanish Armada tried to invade England in 1588, the British ships never had a shortage of gunpowder during the sea battle. By the end of Queen Elizabeth's reign, about 50% of England's saltpeter supply was from domestic sources, largely using a network of saltpeter men throughout the country. While these saltpeter men were hated by the average citizens, their complaints were ignored, on the grounds of national security. It was left to Queen Elizabeth's successors to figure out how to obtain saltpeter without angering the citizens. We will study how they managed to do this in the next post, when we study the rise of the British East India Company.