The History of Saltpeter - X

In our last post, we looked at how saltpeter was obtained in England during the reign of Queen Elizabeth I. During her reign, England built up their stocks of saltpeter and gunpowder, and her successor, King James I, didn't need that much. Incidentally, this is the same ruler that authorized an official translation of the Bible into English, that we know today as the King James Version of the Bible. 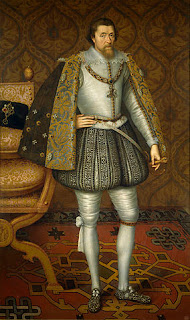 James I of England. Click on the image to enlarge.

During the early part of his reign, he attempted to curb the excesses of the saltpeter men and reduce their powers. However, in 1618, the Thirty Years War started in continental Europe, and the need for saltpeter extraction came back into focus, and the saltpeter men were back in business. However, one more significant development started during the reign of King James I. His predecessor, Queen Elizabeth, issued a royal charter authorizing the creation of the Honourable East India Company on December 31st, 1600 AD. Initially authorized to trade in cotton, spices, silk, indigo etc., the company also began to import small quantities of Indian saltpeter during James's reign. By the time of the reign of King Charles I, the imports of Indian saltpeter were still small and England was deriving most of its supplies from local saltpeter men or importing from Europe. During King Charles I's reign, England was obtaining about 280 tons of saltpeter a year in the 1630s, but when the English Civil War broke out in the 1640s, the demand for saltpeter rose again and the English saltpeter men and other European producers could not meet their needs. The East India Company saw an opportunity and stepped up the quantity of their saltpeter imports from India. By the time of the Restoration in the 1660s, when King Charles II became the king of England, the East India Company were shipping over 1000 tons of saltpeter annually from India and the need for saltpeter men in England went away soon afterwards, giving the East India Company a virtual monopoly.

The East India Company found the trade in saltpeter very profitable for them. While they imported other goods to England, the mark-up on cotton textiles was seldom more than 200%, whereas they could easily mark-up saltpeter to well over 400% and still find willing buyers. Not only that, since saltpeter is a chemical, it isn't a perishable item unlike their other imports (tea, pepper, spices, indigo etc.) and can withstand rough handling. They used it as ballast on their ships and simply emptied their holds upon returning to England. Saltpeter also repels insects and bacteria, so it also helped preserve the hulls of their wooden ships.

It might be interesting to note that by the time the East India Company (and other European countries) first started trading in India around 1600 AD, saltpeter manufacturing was already a well-established industry in different parts of India for at least 150 years or so and they were the largest manufacturers of saltpeter in the world until the importance of black powder began to decline in the late 1800s. The saltpeter produced in India was not only of better quality, it was also cheaper than anywhere else in the world and was produced in huge quantities as well. The British held a monopoly on Indian saltpeter and were very happy to supply their allies (Sweden, Portugal, Spain etc.) with it, but kept it out of the hands of their enemies. This is why the French were forced to develop saltpeter plantations, because they couldn't access Indian saltpeter the way that the British could. By the time of the battle of Waterloo in 1815, the East India company had exported 7300 tons of saltpeter that year alone. During the US Civil War, both the North and the South were supplied with Indian saltpeter from England. The following quote is by C. H. Davis of the Bureau of Ordnance, US Navy from November 22nd, 1862 in a report to the US Congress:

I feel it, therefore, to be my first duty to urge that suitable provision of ordnance material be made for probable future necessities of the Navy. Most important among them is nitre, which enters so largely into the composition of gunpowder that it may be said to be gunpowder itself, with some slight additions of sulphur and charcoal under proper combination.

It is not produced naturally in this country, nor by any other but India, except in insignificant quantities.

Hindostan (India) alone supplies the whole world, which being a British dependency, places us entirely at the mercy or caprice of that power for our stock of this essential article.

Therefore, a study of the history of saltpeter production in India will be the subject of the next few posts in this series.