In our last four posts, we looked at how cartridges were made in the Kynoch factory in the 19th century. We will briefly look at how cartridges are made now. It is interesting to note that while technologies have improved to where machines can do the work previously done by humans, many of the principles still remain the same.

First, we look at the process of cartridge case forming, as it is done in a factory today: 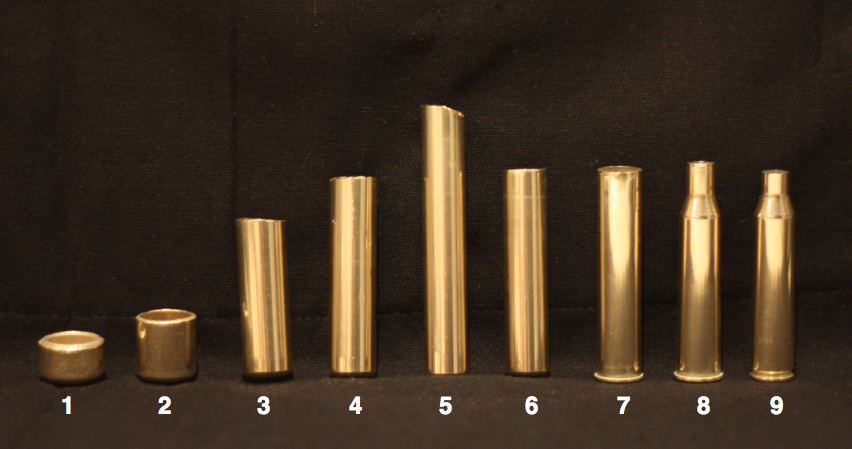 The image above shows the process of drawing the brass case gradually and annealing it at multiple stages, until it reaches the required length (steps 1 - 5). Then it is trimmed to size in step 6 and the case head (the base) is shaped (step 7) and then the neck is formed (step 8). Finally the rim and mouth are machined to the final cartridge specification.

During the process of shaping the case head, a tool called a headstamp bunter punch is used to shape the base and form the primer pocket, as well as add manufacturer information to it. 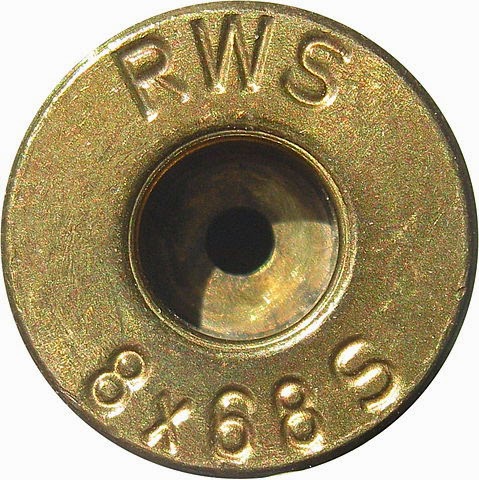 Base of a 8x68 mm. rifle cartridge made by RWS. Click on the image to enlarge.
Image licensed under Creative Commons Attribution-Share Alike 3.0 Unported License by BreTho at wikipedia. 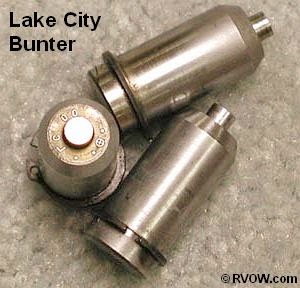 Now, let us look at some videos of manufacturing processes at various factories around the world. The first video was produced in the 1940s by British Pathe and shows a factory in South Africa:

In this particular factory, they cast their own brass billets from scratch. Note that some of the processes used in this factory were still manual and done by humans. However, the really dangerous processes of loading the primers and the propellants have been automated by this time.

The next video is from Silver State Armory and is a slideshow of their manufacturing process. Note that the process is pretty similar to what was described in the previous posts.


This video is more of a slide show and describes the various stages of manufacture, but does not show the actual machines involved.

The next video is produced by the NRA and shows ammunition being made by Hornady (for non-US readers, Hornady is a well-known manufacturer of ammunition in the US):


This video shows more of the manufacturing process, as well as some of the machinery used. Hornady uses mechanical force to form bullet jackets, rather than heating and molding them. The video shows the complete process, including testing, quality control and packaging the cartridges.

The next video shows ammunition being manufactured at Winchester:

Finally, here's a long video from Field Sports (a British channel), showing the process of cartridge manufacture at RWS (a large manufacturer from southern Germany):


At 22 minutes long, this is a bit longer than the other videos, but it also covers the manufacturing process in pretty good detail.