We have looked into several developments for metallic cartridges in the last few posts. In today's post, we will look at a very early development in metallic cartridge history. The cartridge we will study today is Walter Hunt's Rocket Ball cartridge and the rifle that was built to fire it, the Volition Repeating Rifle.

A long time ago, we had studied about expanding bullets and the Minie ball. These were bullets produced with a hollow conical cup fitted at the base of each bullet. When the rifle was fired, the cup would move up and expand the base of the bullet, so that it would engage the rifling grooves and also make a tighter gas seal, so that the gases would mostly use their energy to push the bullet out of the barrel, instead of escaping out around the sides of the bullet. However, expanding bullets like the Minie ball were used with muzzle loading rifles. This meant that a user would pour in gunpowder first, then drop in the bullet, then ram everything down the barrel, then cock the weapon and add a percussion cap, all this before the user could pull the trigger. This meant loading took a while.

In 1848, a gentleman named Walter Hunt from New York, invented a new type of metallic cartridge that he called the Rocket Ball. A copy of his patent claim (US 5701) is available online, 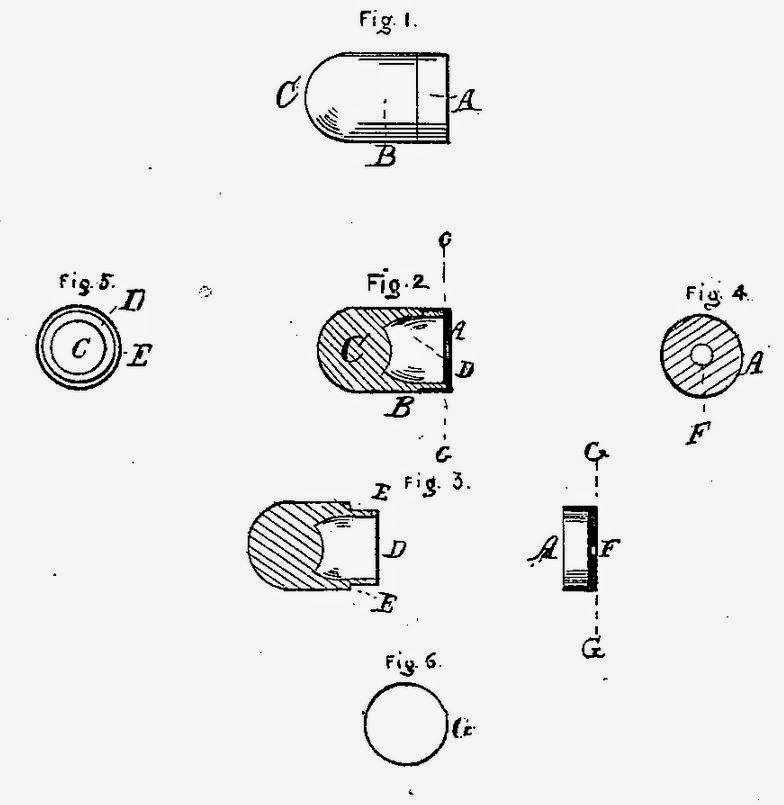 Patent for the Rocket Ball Cartridge
Click on the image to enlarge. Public domain image.

Like the Minie ball, this bullet also has a deep hollow in the base. This hollow serves the same purpose as the Minie ball, (i.e.) it serves to expand the base of the bullet when it is fired and makes a tighter gas seal. However, the design also has a second use for that hollow space -- Walter Hunt also filled the hollow with gunpowder and sealed the base with a cap with a small round hole in its base for ignition. In the above diagram, A is the cap in figure 1, shown attached to the bullet. In figure 3, the cap A is shown disassembled from the bullet. In figures 3 and 4, you can also see the small hole in the middle of the cap, represented by F. The gunpowder was packed into the cavity D. The line GG represents a thin waterproof seal, through which the priming flame could penetrate to ignite the gunpowder in D. The seal prevented the powder from getting spoiled by moisture, or falling out from the back of the cartridge.

Upon firing the gunpowder, the base of the bullet would expand and separate from the cap, which would also expand and seal the breech from the back. The bullet would be pushed out of the barrel, leaving the cap behind resting on the breech plug. Upon loading the next cartridge from the breech, the cap would be pushed forward and end up in front of the next bullet. Upon firing the next cartridge, the old cap would leave the barrel ahead of the next bullet fired, thereby wiping the barrel on the way out and cleaning some of the powder fouling. 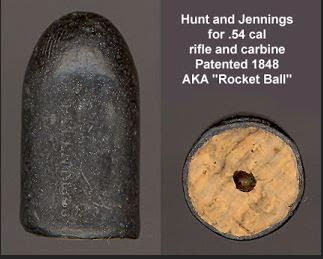 Therefore, this was not only one of the early metallic cartridges invented, it was also an early type of caseless ammunition! Unlike the Minie ball, loading this new ammunition was much faster because bullet and gunpowder were all contained in a single package and the user only needed to add the percussion cap.

To fire this new type of ammunition, Walter Hunt also developed a firearm called the Volition Rifle. It was one of the first lever action weapons invented. The rifle was somewhat complicated to build and contained a number of small delicate parts. Therefore, it was not a commercial success and only a few examples were built.

However, the idea of a lever action repeating rifle firing a self-contained cartridge was picked up by other people, notably a gentleman named Mr. Lewis Jennings, who invented a better lever action rifle called the Jennings rifle, which was manufactured between 1849 and 1852, Like the Volition rifle, this was also fired by an external percussion cap. While Lewis Jennings took care of marketing the rifle, the manufacturing was subcontracted to a company called Robbins & Lawrence Arms Company in Vermont.

A Jennings Rifle. Click on the image to enlarge.

It is interesting to note that the foreman of the Robbins & Lawrence Company factory during this time, was a gentleman named Benjamin Tyler Henry. He worked with two other employees of the factory, Horace Smith and Daniel Wesson, to improve the rifle design. We will read more about these three employees and their further inventions in the next article.

The Jennings rifle was only manufactured for three years before production stopped in 1852, resulting in heavy losses for the company's investors. However, the Volition and the Jennings rifles showed the concept of a rapid-firing repeating rifle was possible. We will study further developments in the next article.