What is Season Cracking?

In our last few posts, we studied the process of manufacturing brass cartridges, as it was done in the 19th century and in modern times. In today's post, we will study a topic related to brass cartridges, a phenomenon called Season Cracking.

Quite often, older brass cartridges may be seen to develop cracks in the case, such as the examples shown below: 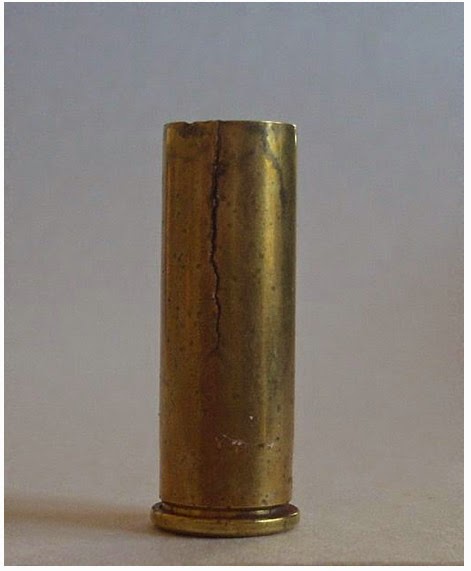 The presence of a crack like this means that the cartridge case is unsafe to use. The first reports of this phenomenon came from British forces stationed in India in the 1800s. They noticed that brass cartridges tended to crack after the end of the monsoon season. At that time, they were not sure why this was happening, only that it seemed to happen a lot after the monsoon season ended and dry weather returned. Therefore, they attributed this problem to the change of seasons and called it "season cracking".

It was not until 1921 that the real reason for the cracked cases was explained. As it happened, monsoons in India were the worst time of year for military operations to be conducted, as the rain storms were often very strong and the ground would get very muddy and unsuitable for travel and transport. Therefore, armies would stay in their barracks and try to keep their ammunition supplies dry during the monsoon season. British forces would often store their ammunition in horse stables during this time and this was where the problem started.

You see, urine contains ammonia and when horses were kept inside the stables for a long time, they had a lot of horse urine to go around. The ammonia reacts with the copper in the brass, to form a cuprammonium ion, which happens to be soluble in water. The high humidity in the air causes the cuprammonium ions to dissolve and wash away, which causes cracks to form.

Examples of brass cracking due to ammonia reacting with the copper in the brass.
Click on the image to enlarge. Public domain image.

The correct explanation for this problem was first given by H. Moore, S. Beckinsale and C.E. Mallinson in 1921.

As it happens, this problem was first found with brass cartridge cases, but it can happen to any alloy that contains a good amount of copper (e.g. bronze, copper etc.). Therefore, it could happen to copper jacketed bullets or bronze parts etc.

Also, it doesn't happen only because of horse urine, but can happen anywhere that ammonia is present. This means it can happen with cat urine, dog urine etc., as well as common household cleaning chemicals that contain ammonia, such as Windex glass cleaner, Brasso polish etc. So, if the ammunition is stored next to a cat litter-box, or near cleaning fluids that contain ammonia, this could cause the cases to form cracks. The first image in this post shows a cracked .35 Remington cartridge and the photographer states that he had cleaned the cartridges with Brasso and then stored them in a place with high humidity for some years.