In our last two posts on the study of black powder manufacture in the 19th century, we studied the process of granulating the powder into grains. The powder coming out of the granulating machines is called "foul grain" and must be further processed. In today's post, we will study the next couple of processes in line: dusting and glazing.

Dusting is done by passing the grains of powder through sieves, so that the grains of a particular size are retained and the smaller dust grains fall through. In smaller factories, this was done by hand or through a shaking machine, using a series of sieves made of hair for filtering the grains. In larger factories, dusting reels were generally used in the 19th century, as these were more suitable for large-scale production. The technology for dusting reels actually came from flour mills. A dusting reel has a cylindrical frame about 1.5 feet in diameter and 8 feet long. The surface of the reel is covered by a fine gauze made of copper wire, silk or canvas. The cylinder is set up with a small tilt from the horizontal. The cylinder is also enclosed by a case to catch the dust, but is open on both ends. The cylinder is set up to be rotated by a belt at a speed of around 40 r.p.m. The powder is fed continuously in the upper end from a hopper. As the cylinder rotates, the powder grains slide down its length to the lower end. Any dust particles that are too small in size fall through the gauze, while the larger grains stay inside the cylinder and slide down to the lower end, where they can be collected into barrels. 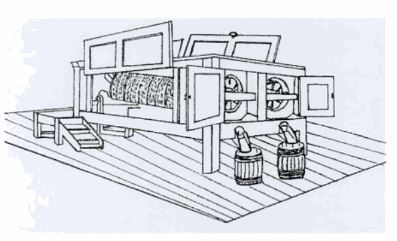 A pair of dusting reels from the early 1800s.

The wooden box case enclosing the dusting reels prevents the fine dust from flying around the building. Periodically, a worker would open the doors and empty the dust accumulated inside the box. The powder was usually run through the dusting reels twice and deemed to be sufficiently dusted.

After dusting the powder, the next process was to glaze it. The process of glazing smooths out the grains somewhat by breaking off the sharp angles and points on the grains and also stops up the outer pores of the grains, which makes the exterior of the grains tougher and more impervious to moisture and less likely to turn to dust. It also increases the density of the grains slightly -- for instance, a powder with density 0.810 before glazing increases its density to 0.893 after 42 hours of glazing. Also if glazing is done for long enough, it can improve the combustion of the grains a bit as well, as the niter ends on along the surface of the grains.

The process of glazing was carried out in wooden drums similar to those used for mixing the ingredients, which we studied earlier. the chief differences are that these drums don't have ribs on the inner side of the drum, nor do they have an axle passing through the center of the drum. Instead, the axle attaches to the circular ends of the drum by means of bolts fastening it to a cross piece on either end. The drum has a long door across its length, which can be opened to drop the glazed powder into a funnel after the glazing operation is done. As the drum is rotated, the powder grains get thrown about and hit each other and the sides of the drum, thereby becoming polished. The glazing drums generally have speed counters to regulate the speed of a drum during the process. The speed of rotation and the time of rotation depends on the powder being glazed and where it was manufactured. For instance, in England, R.F.G. (Rifle Fine Grain) grade powder was generally glazed in drums about 2 feet wide and 6 feet in diameter and rotated at about 12 revolutions per minute. Each drum could take about 900 lbs. of powder. For R.F.G powder, the drums were run for 5.5 hours each, for R.F.G2 powder, the process took about 10 hours. No graphite was added to these powders, as the friction and heat caused by the motion was enough to produce a brilliant glaze. For R.L.G (Rifle Large Grain) powder, it was run for about 1.5 hours at 34 r.p.m with one ounce of graphite added per 100 lbs. of powder. R.F.G4 grade powder was glazed for about 3 hours, the graphite being added to the drums after they had run for 2 hours first. The purpose of adding graphite to larger grain powders is to increase the gloss of the powder and render it less likely to absorb moisture due to the increased density of the surface layer. Over in America in the Confederate states, we know that their manual specified that the grains were to be glazed for ten to twelve hours, with the drums rotating at least 9 times a minute.

During the glazing process, any inferior quality grains (i.e. those that were likely disintegrate during transport later) get turned into dust as well. Therefore, many manufacturers would run the powder through the dusting process for a second time after the powder had been glazed, to remove any dust that might have been generated by the glazing.

The machinery for both the dusting and glazing operations were usually powered by water-mills, which is why many powder works were located near fast-flowing sources of water. Alternatively, horses were also used to drive the machinery. 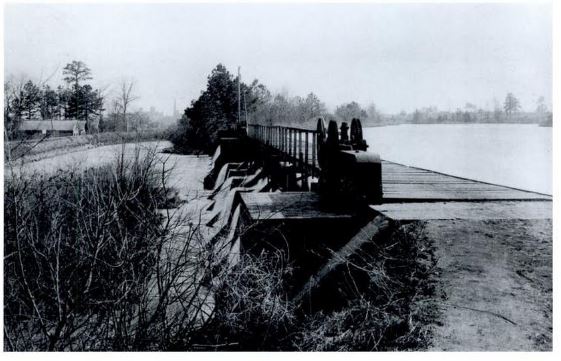 The two houses that appear on the upper left corner of the picture above were once part of the Confederate Powder Works in Augusta, Georgia. The two buildings were where the dusting and glazing operations were once carried out and survived the end of the Civil war, as the picture above was taken in 1894.

Interestingly, though the Confederates used separate dusting and glazing operations through most of their period of operation of the facility, they also attempted to speed things up by combining both steps into a single process along with drying. The process placed the powder into a cylinder as above, but the axle passed through the drum and was hollow and had perforations. Air was heated by passing over steam pipes and this hot air was fed through the axle, the idea being that the hot air would dry the grains and carry the dust away, while the agitation of the grains by the revolving cylinder would glaze the grains as well. However, this process was not perfect and contemporary records show that powder was often sent back to the mill for reworking the glazing process using the traditional method.

In our next few posts, we will study the next operations in line: the drying and finishing processes, followed by packing.