Black powder from the factories was usually packed in barrels or cases.

Powder cases were usually made of copper and the powder was put in a linen bag and placed in the case. Alternatively, the case was made of wood, with a second inner box also made of wood.

Barrel making was an art that was well developed over several centuries, and by the 19th century, people already knew how to make barrels able to hold liquids without leaking. However, powder manufacturers usually put the powder in a linen bag and then placed it in the barrel, or in some places (such as France), they used a second inner barrel. For military purposes, some manufacturers coated the inside of the barrel with paper to make it leak-resistant. 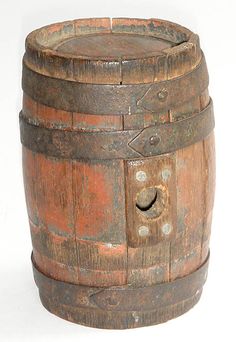 In the 17th and 18th centuries, it was the custom in the German-speaking states of Europe, to coat the barrels on the inside with linseed oil. This was done to protect the powder from moisture.

There was a good reason to use a cloth bag inside the barrel: In order to fill the barrel, the upper hoops have to be loosened, so that the top of the barrel can be removed. Because of this, the staves expand a bit and the openings may fill up with some powder grains as the powder is poured into the barrel. Then when closing the barrel, the grains in the openings will get crushed. If something harder than wood, such as a grain of sand or a piece of metal, get into the openings, then a small impact, such as a blow from a wooden hammer, could cause the powder to ignite. For this reason the powder was first put in a bag, which was then put inside the barrel. 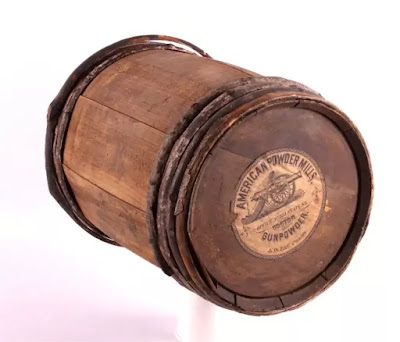 A powder keg made by American Powder Mills in the 19th century. Click on the image to enlarge.

The barrels were closed using about six to eight hoops. Experiments made in the 19th century showed that hoops made from barked willow or hazel-wood, preferably cut in winter time, worked better than unbarked wood, because they didn't suffer from wood rot. The bags were usually made of loosely-woven linen cloth.

Each barrel was placed on a scale and weighed before filling and then the barrel was kept on the scale as powder was poured in using a copper funnel, until the desired weight of powder was filled in. The weight of powder put into the barrel depended upon the type, the size of the barrel, the country of manufacture etc. The barrels were usually filled to about 90% of their capacity, because it was believed that rolling the barrels occasionally prevented the powder inside from caking. After this, each barrel had a label attached to it, containing details such as the type of powder, the year that it was manufactured, the name of the manufacturer and factory location, the number of the supply, the weight of powder and the seal of the person that examined the barrel. In many places, the color of the label also indicated the type of powder contained in the barrel.

In 17th century France, they used the linen bag inside the barrel method of packing. Towards the beginning of the 18th century, they used the method of one barrel packed inside another barrel. The inner barrel (called the baril) was lined with cloth and filled with about 110 lbs. of powder and then placed inside a larger outer barrel (called the chape). The outer barrel contained details such as the year and place of manufacture, powder type, average range and average muzzle velocity etc. Instead of barrels, they sometimes also used wooden boxes lined with sheet zinc, which were filled and then put inside a second wooden case. For transport in ships, copper cases enclosed in wooden cases were used. 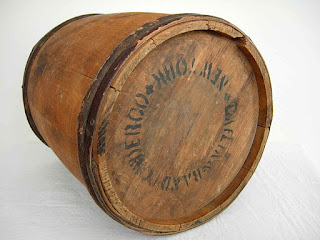 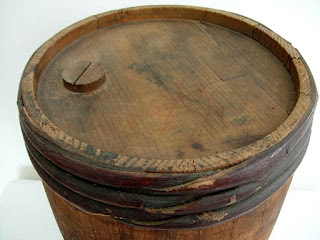 Powder keg made by American manufacturer Laflin & Rand. Click on the images to enlarge.

The above two images show a wooden powder keg made by the Laflin & Rand Powder Company of New York. This company was once a major competitor to Dupont in 19th century America. The top of the keg has a stopper (visible in the second image) and has the markings "FF" to indicate that the contents of the barrel are of a grain size suitable for use with rifles. The bottom of the keg has the marking, "Laflin & Rand Powder Co. New York", indicating the manufacturer name and factory location.