In our last post, we studied what goes on in the finishing process of manufacturing black powder, namely some more dusting, blending and sifting. Despite using the utmost care in the sifting process, the powder will always contain a certain percentage of grains which are above or below the desired grain size. This percentage varies quite a bit as the various operations described previously take place. Therefore, manufacturers would often use a blending process to mix the contents of various batches together, so that the end result is a powder of more uniform performance. We will study that blending process from the nineteenth century in today's post.

In England, some mills would combine powders from different batches in the dusting reels that we studied about in our previous post. 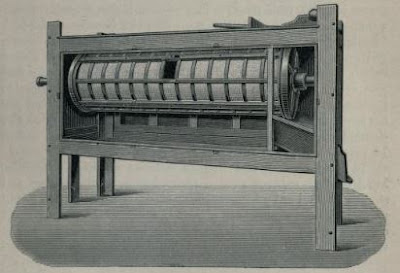 Another technique that was common in England was to use a large wooden box with four equal sized compartments, each of which was big enough to hold one barrel of gunpowder. At the bottom of each compartment is a sliding door that leads down to a central chute. After the compartments are filled, the sliding doors are opened simultaneously and the powder from all four compartments pass through the central chute and are mixed together on the way out.

In Germany, the process was done similarly. Six copper funnels are arranged in an inclined position around a central main tube and the other end of the central tube ends in a short leather tube, which can be lifted by using a rope, which puts a kink in the hose and prevents the powder from running out of it. At Spandau, each funnel held about 220 lbs. (100 kg.) of powder and at Dresden, each funnel held about 440 lbs. (200 kg.) of powder. The German manufacturers would offer two blends, a special blending and a general blending. In a special blending, they would place two barrels of each powder to be blended in each funnel (in Dresden, they would use four barrels per funnel since the funnels in Dresden were twice the size of those in Spandau). When all the funnels were filled up, a barrel was placed below the leather pipe and then, the leather pipe was opened to blend the powder in. After twelve preliminary blendings were done, they would perform a final blending operation by taking a barrel or two from each preliminary blending and then repeating the process until the preliminary blendings were all mixed together again.

The process in Switzerland was similar. A large square box with a pyramidal bottom, which could hold about 1350 to 1600 lbs. was used. At the bottom of the pyramid was a perforated pipe fixed to the funnel opening and covered with a damper. They would take about 100 lbs. from each powder to be mixed and alternately pour them into the box. After the box was filled, the damper was withdrawn and the powder would pass through the perforated pipe and get mixed as it fell into the barrel below.

In France at the factory of Sevran-Livry (a suburb of Paris), the process was a bit more automated. They used a wooden frame with an arrangement of eight trays in two parallel rows of four each. Each frame had a hole in the center covered by a shutter valve, which could be used to regulate the flow of powder. Below each frame was an endless cloth belt upon which the powder would fall. At the end of the these cloth belts was another cloth belt running at right angles to the first set of belts. A system of gears ensured that the first endless belts ran at a speed of 10 times greater than the central belt. At the other end of the endless belt was a trolley carrying at least two barrels and the belt would drop the blended powder into one of them. As soon as the barrel filled up, the trolley would move so that the second barrel would start to fill and meanwhile, the first full barrel was removed and emptied or replaced with another one.

In our next post, we will study the packing process of the black powder.