In our last post, we studied an influential stance called the Weaver Stance. In this post, we will study a stance that is very similar, which is called the Modified Weaver a.k.a the Chapman Stance.

This particular stance is named after Ray Chapman, another influential shooter. Like Jack Weaver, he had a California police background as well and was the rangemaster at the Los Alamitos police department. He adopted Jack Weaver's stance and modified it slightly. It uses the same push-pull tension of the Weaver stance, but instead of bending both arms at the elbows, the Chapman stance holds the dominant arm in a straight position and locks the elbow. The support hand elbow is bent and provides the tension.

The following two images easily illustrate the difference between the two stances: 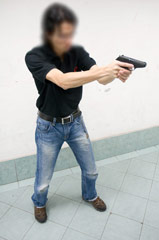 In the above picture, we have a person demonstrating the Weaver stance. Note how the elbows of both arms are bent. 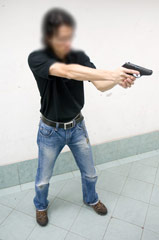 In the above image, we have the same person demonstrating the Chapman stance. Notice how the dominant hand is extended so that it is straight and the elbow is locked.

The advantage of this stance over the Weaver stance is that it gets its stability from both muscle and skeletal support and is more suitable for people who lack upper-body muscle strength.
Posted by The Editor at 9:27 PM 1 comment:


In our last post, we looked at the one-handed handgun shooting stance. In this post, we will look at a commonly used handgun-stance called the Weaver Stance.

The Weaver stance is often seen in movies and videos that involve handguns and even people not familiar with firearms will recognize the stance, although they may not know its name. The pictures below show the stance, as demonstrated by the inventor himself: 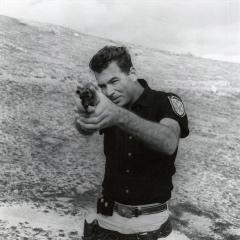 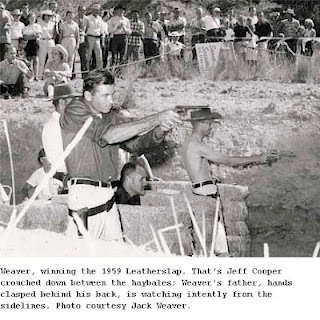 This position was originally pioneered by Jack Weaver, a Los Angeles County Deputy Sheriff, in the late 1950s. His stance consists of the following:


Jack Weaver successfully used this stance when competing in the "Leatherslap" matches organized by the legendary Jeff Cooper. The object of such competitions was to pop twelve 18" wide balloons set up at 21 foot distance in the fastest time. Even though this stance looked a bit ungainly when it was first used, this technique allowed Weaver to quickly aim the handgun at eye level and beat opponents who were using other stances. As Weaver admitted later, "it looked kind of stupid, and everyone was laughing at me, but it worked!".

Since other competitors were using some form of single-handed shooting technique, they would often shoot a bit faster, but not necessarily hit their target. As Jack Weaver observed about his two-handed technique, "a pretty quick hit was better than a lightning-fast miss!". He won quite a few of the early competitions using this stance and this influenced the adoption of this stance by others, as well as the abandonment of one-hand shooting techniques.