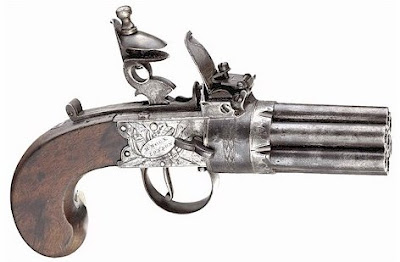 The above is a fine example of a pepper-box revolver using a flintlock firing mechanism. Each time the user wants to fire it, he or she would have to turn the barrel, then open the pan and put some priming powder in, then cock the lock and then pull the trigger to fire. The weapon fires the barrel that happens to be at the top-most position when the trigger is pulled. The advantage of this over a single barrel pistol is that the user saves the time of loading a new ball and powder each time, as this can be done in advance for the six barrels.
Later on, when percussion cap technology was invented, the industrial revolution was in full swing and this enabled pepper-box revolvers to be mass produced. This made these revolvers much cheaper and thus affordable to a lot more people. 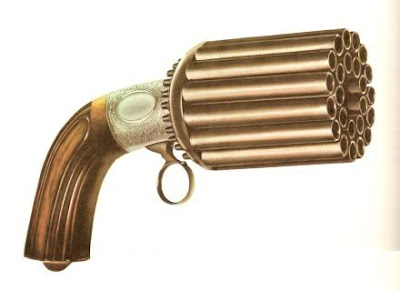 The image above is a 24-barrel pepper-box revolver using percussion cap technology. This particular specimen was made in the 1850s by a Belgian gun maker called Mariette. The user would load each barrel individually and then put a percussion cap on each of the nipples sticking out at the back of each barrel. While a 24-barrel specimen like this would take at least 40-60 minutes to load, but only take a short time to fire.
With the advent of pinfire cartridges, the pepper-box regained some popularity in the late 1800s as a small concealable weapon. 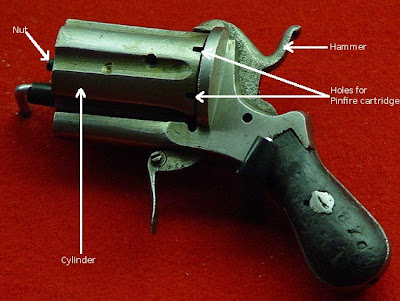 Public domain image from wikipedia.com
In the above example, we see a French-made Lefaucheux pepper-box revolver using pinfire cartridge technology. The user first removes the cylinder from the weapon by unscrewing the nut marked in the figure. The user then loads pinfire cartridges into the back of the cylinder, making sure that the firing pins of the cartridges stick out of the holes in the cylinder. The user then pushes the cylinder back into the weapon frame and screws the nut back in place. When the user pulls the trigger, the hammer strikes the pin of the cartridge on top of the weapon and it fires.
Most pepper-box revolvers are short range weapons and therefore, many specimens have no rifling at all, since it is not necessary for such short ranges. There are some examples with rifling in the barrels, but the majority of them have no rifling, including many that were manufactured decades after it became common to add rifling to other types of weapons.
One of the difficulties with pepper-box pistols is adding sights to the weapon, but since the weapon is usually designed for point-blank range use, this is not much of an issue. It is also difficult to maintain the balance of such a weapon.
Pepper-box revolvers started to disappear from public view around the 1840s or so, after the invention of true revolvers by Samuel Colt and others. However, there are still a few pepper-box type revolvers still being used today, most notably a P11 underwater revolver designed by Germany's Heckler & Koch.
The idea of a multiple barrel weapon has also been used in non-portable weapons. Richard Gatling used the idea his Gatling gun, which was mounted on a cart. The modern descendants of the Gatling gun are still used to this day, notably by the Fairchild Republic A-10 Warthog and the Lockheed AC-130 airplanes.
Posted by The Editor at 12:05 AM