In the early days of firearms, bullets were mostly made of cast lead balls. When we look at early firearms such as the petronel, culverin and matchlock weapons like the arquebus, these were essentially hand made weapons and the user was often the same person who helped build it. None of these weapons were built to any particular standard and hence, each weapon was supplied with its own bullet mold, so that the user could cast their own bullets as needed. Even when weapons like the caliver (which was built with a standard bore size and gave us the English word "caliber") were introduced, users were often supplied a set of bullet molds with them. 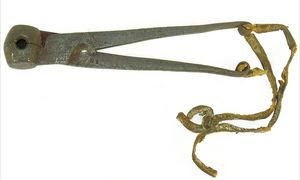 What we have here is an antique musket's bullet mold. This type of mold is called a scissors mold and is made of cast iron. The specimen is a bit pitted due to wear and tear, but still works very well when it comes to casting bullets. It looks similar to a pair of pliers, except that the jaws enclose a hollow spherical section in between them. The picture below shows the view of the other side of this mold.

As can be seen from the above picture, the two scissor arms can be manipulated to open or close the mold as needed. The picture below shows how the mold looks from the inside, when the jaws are opened.

To cast a ball, the user initially melts a quantity of lead in a container. Then the user closes the mold and pours in some lead through the hole on top. The lead quickly cools and solidifies inside the mold. Next, the user opens the jaws by manipulating the scissor arms and extracts the bullet. This bullet is mostly spherical except for a tiny bit of projecting metal, called the sprue which is formed by lead hardening in the hole through which the lead was poured through. There is usually a thin parting line formed around the ball as well, along the line where the mold opens. The lead bullet is taken out and then the sprue and parting lines are filed off, to leave behind a spherical bullet.
Of course, using a mold like this is slower work, since the user can only produce one bullet at a time. It must be said that lead does solidify fairly quickly, but this is a slow process even then. A faster way to handle this is a multi-bullet mold, something like the example shown below: 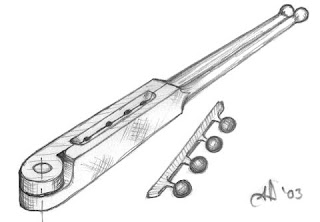 In the diagram above, we see a design plan of a hinge-type bullet mold. In this one, the jaws are closed and molten lead is poured down the groove in the middle of the jaws. After the lead cools, the jaws are opened to reveal four bullets which can be cut free from the sprues and then filed down to spheres. The left over lead from the casting can be remelted for the next batch. 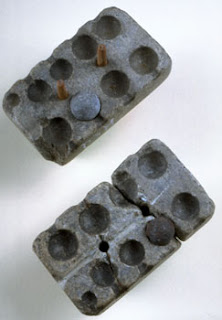 The picture above shows a multi-bullet mold used for the famous Brown Bess musket, which served British forces for over one hundred years. This particular mold is made of soapstone and comes in two halves. Note the two wooden pins sticking out of the center of one half of the mold and the two corresponding holes in the middle of the second half. These pins are used to make sure that the two halves of the mold are properly centered. The two halves of the mold are brought together and then molten lead is poured through the holes along the edges. After the lead is allowed to cool, the two halves of the mold are separated and eight musket balls are taken out. As before, the balls are mostly spherical, but they have a little extra projection where the lead has cooled at the holes through which the lead is poured in. There is usually also a little thin parting line around the circumference of the ball corresponding to the two halves of the mold. These projections must be filed out and then the balls are ready to use.
It must be remembered that there are a few issues with metal casting. For one, the molten metal must be poured into the mold slowly, so that the air inside the mold is allowed to escape, otherwise the cast bullet may have air bubbles trapped inside it. Also, molten metal occupies a bit more volume than solid metal, so the casting shrinks a bit when it solidifies. Hence, the final casting is a bit smaller than the mold itself.
As these balls were mostly used with muzzle-loaders, the size of the ball was generally a bit smaller than the diameter of the musket bore, so that these were easy to load into the firearm. For example, a Brown Bess musket's bore was 0.75 inches, so the balls produced by this mold would be something like 0.69-0.70 inches in diameter. The user would first pour some gunpowder down the barrel, then take a ball and wrap it around a greased patch to provide lubrication and a tighter fit and then ram the resulting package into the barrel.
Spherical lead balls were in use for a very long time between the 1200s and 1800s or so and it was not until the 1820s that people started to slowly go for other types of bullets. These bullets are still used today by certain hunters who wish to hunt like their ancestors did.
Posted by The Editor at 10:57 PM