In the last post, we saw the history of the first Colt six-shooter, the Walker Colt model, followed by the Colt Dragoon family and the rise of machine-made interchangeable parts and innovations in machining technology.

Colt went on to make a lot of weapons during the civil war, such as the Colt Navy 1851 pistol and Navy 1861 models. Some of the famous users of the 1851 Navy model included Wild Bill Hickok, Doc Holliday, Sir Richard Burton, Ned Kelly and General Robert E. Lee. These models sold very well and made the Colt company a lot of money.

However, it must be noted that the Colt revolvers were still using percussion cap technology well into the 1860s, even though metal cartridge technology and the center-fire cartridge has already been invented. The reason for this is because Smith & Wesson held the patent for bored through revolver cylinders and Colt didn't want to pay royalties. So Colt elected to wait until 1869, when the patent ran out, before they started work on a new revolver. This revolver competed successfully in the US Army trials of 1873 and was adopted as the new standard military revolver. It remained as the official service revolver until 1892 and has continued to be manufactured all the way to the present day. The Colt Single Action Army Revolver was nicknamed the "Peacemaker" and the "Equalizer" (because it made all men equal!) and it was known as the "gun that won the west". 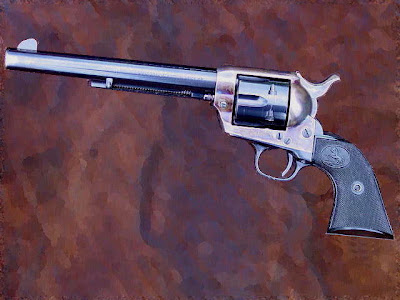 Public domain image from wikipedia.com. Click to enlarge.
The picture above shows a Colt Peacemaker made in 1956 (the "second generation" model!). The Colt Peacemaker is a classic weapon seen in many western movies. It was the weapon of choice for Wyatt Earp, Bat Masterson, General George S. Patton and Lawrence of Arabia. In fact, Lawrence of Arabia considered it his lucky weapon because he was once attacked by an Arab bandit in pre WW-I Mesopotamia. The bandit seized Lawrence's revolver and was threatening to shoot him with it, but could not do so because he did not understand its mechanism. Since then, Lawrence always carried one for good luck.
Like the previous Colt models before it, this is also a single action revolver. However, it uses a centerfire cartridge instead of percussion caps and black powder. Loading is accomplished by opening a loading gate on the side and dropping cartridges, one at a time into the revolver. Although six cartridges can be loaded into it, most people load five chambers and leave the chamber which is facing the hammer empty as a safety precaution. This way, the weapon cannot fire if it is dropped accidentally. To fire, the user simply pulls the hammer back, which cocks the hammer back and also rotates the cylinder to the next chamber. Then the user pulls the trigger to fire the weapon. The user can also fire rapidly by holding down the trigger with one hand and repeatedly pulling the hammer back with the other palm in a fanning motion. While this is not considered a safe way to fire, it is the image of a gunfighter thanks to Hollywood movies.
The Colt Peacemaker was originally manufactured to fire a .45 caliber Colt cartridge for the army and it was initially priced at the low cost of $17. Various civilian versions were soon manufactured in other calibers as well. For instance, the Colt Frontier models were designed to use the Winchester .44-40 and .32-20 cartridges because many western frontiersmen, cowboys and lawmen owned a rifle as well as a revolver. Since Winchester rifles were commonly used at this time, Colt designed the revolver to use the same cartridges as the rifles, so that the user only needed to carry around one type of ammunition. It was also certified in the 1900s to use the new smokeless powders instead of black-powder. Other popular calibers followed in the 1900s as well, including the .357 magnum, .38 special etc.
The first generation of the Peacemaker was made between 1870 and 1941, in a variety of calibers from .22 rimfire to .476 Eley cartridge, totalling about 30 separate calibers, which gives a measure of this weapon's popularity. There were approximately 357,000 first-generation revolvers of this model made. The second generation model, like the one pictured above, was made between 1956 and 1974 and about 73,000 were made. In 1976, the third generation was issued and this one featured a different thread pitch in the rifling of the barrel and a redesigned cylinder bushing. The third generation model was made until 1982 and 20,000 were made. In 1994, production of the third generation model restarted (sometimes called the fourth generation) in a number of popular calibers.
Colt still makes this weapon and lists it in its catalog, as do a host of other manufacturers who also make near copies of it. This weapon was the inspiration for a number of other modern revolvers and is truly "the gun that won the west."
Posted by The Editor at 10:22 PM