In our last post, we studied the basic components of black powder and how they were obtained throughout history. In this post, we will study the history of its manufacture.
The three ingredients, namely potassium nitrate (or sometimes sodium nitrate), charcoal and sulfur are ground up into powder and mixed together. In the earliest processes, the dry ingredients were all put into a grinding apparatus (usually a mortar and pestle) and ground together into a powder mixture called a "serpentine". The exact proportions of the three components in the middle ages were varied from country to country. It is known that England was using a 6:2:1 ratio by weight in the 1350s, while the Germans were using a ratio of 4:1:1 during the same period. The French also had black powder, but it is not known what ratio they were using. In fact, the various proportions of the ingredients and the technique of making high quality charcoal were both closely guarded state secrets throughout most European kingdoms. There were a few issues with black powder manufacturing during this period. One was that the mixing process was highly dangerous since the materials are highly inflammable. The second was that there wasn't much consistency in the final product, so one batch of powder would have better shooting properties than another batch. The third issue was that since the powders of the three ingredients were not the same sized particles, if the powder was transported by cart to a battlefield, chances were very good that the vibrations would make the smaller ingredient particles settle in the bottom of the box. This meant that the serpentine powder would need to be mixed again thoroughly, just before use.
One of the major inventions to improve this situation came out of Europe in the late 1400s or so -- a process called "corning". The powder manufacturers of medieval Europe had realized early on that the way to reduce a large portion of the risks of the manufacturing process was to wet the ingredients with water or wine first and grind them separately and then mix the wet ingredients together. Then the resulting black-powder could be dried in the sun before use. They also realized that the ingredients could be mixed wet and pressed into cakes of a given uniform density (1.7 gm/cc is ideal). The cakes could then be dried in the sun where they become hard and brittle. 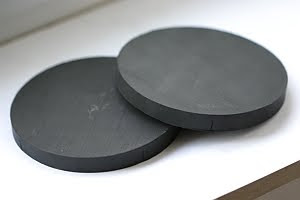 Black powder pressed into cakes of uniform density
The cakes could then be broken into grains or corns and these grains could then be sorted into standardized sizes by passing them through various sieves. This whole process was a major improvement, because it fixes all the problems enumerated earlier. In fact, all black powder manufactured to this day is still corned.

Different containers of corned black powder sorted by grain size
The Europeans experimented with manufacturing various grain sizes and determined that larger grains are more suitable for larger guns and cannons and smaller grains, which are quick burning, are more suitable for pistols. Hence, they were the first to produce different types of gunpowder, each of uniform grain sizes. Because of this uniformity and consistency, European gunpowder was generally regarded as higher quality than gunpowder manufactured in America or Asia. However, not all European countries were producing quality black powder. W.W. Greener's book, The Gun and its Development from the mid 1850s, mentions that powder in England is of various grades and makers like Curtis & Harvey and Pigou, Wilks & Lawrence make some quality powders. He says that a grain size classified as "African" is very good for export purposes, but cautions to buy a powder marked "Brazil" designed for export to South America saying that it looks very attractive because it is highly glazed, but is actually a very poor quality powder. Apparently, the South Americans valued its shiny looks more than its shooting properties and the author mentions that the only reason to buy this is for trading purposes. He says that Spanish powder quality varies upon locality and that the Swedes and Norwegians make very good quality powder, but unfortunately in limited quantities for their own markets only. He also says that German powders also vary depending on locality, but some are very high quality, sometimes even exceeding the finest English powders of the time. He classifies the powders made by the French (and all the French possessions at the time) to be the worst quality and full of dust, due to the fact that the manufacture of black powder was a monopoly held by the French government at that time and they didn't allow imports of black powder from other countries either.
By the 1750s, the ratio of 15:3:2 by weight (i.e. 75% potassium nitrate, 15% charcoal and 10% sulfur) was becoming common in most of Europe and by 1800, it was the ratio used around the world and is still the standard today.
The process of manufacturing corned black powder is still the same, except that since the 1800s, the process of grinding and mixing the materials has been largely automated. In the early 1800s, the common type of mill used for grinding was the edge runner mill. This is an ancient type of mill that was invented in China in the 5th century AD and spread to Europe about 800 years later. It was commonly used for hulling rice and crushing ore. It consists of one or more heavy disks set on their edges and a circular lower milling trough or tray. The disks roll around the trough in a circular path and crush everything in their way. 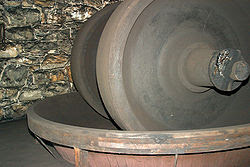 Public domain image courtesy wikipedia.com
These mills were usually driven by water power and therefore the powder factories were located close to rivers. Edge runner mills are still used in food processing today and are seen in some chocolate factories.
Most modern processes use a ball mill to do the job. It consists of a hollow cylinder into which the raw materials are put in. There are also a number of balls made of lead, brass or bronze put into the cylinder. These materials are chosen because they are non-sparking in nature. The materials are put in the cylinder and water or alcohol is added to keep it wet. The cylinder is then closed and rotated about its axis for about 3 hours. 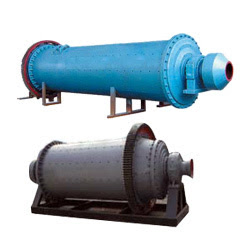 The balls rub among themselves and grind up the raw materials between them into a fine powder. After some time, the cylinder is opened and the ground up material is extracted. In some cases, the three ingredients are ground up separately and then combined later. In other cases, the three ingredients are put into the mill simultaneously and ground up together. The three powdered ingredients are mixed together when wet and then pressed into cakes, which are dried and then broken up into grains which are sorted by sieves into various standardized sizes.
Black powder was the only propellant used between the 1200s to the late 1800s or so. One of the problems with black powder is that it leaves behind a lot of residue, which means that guns need to be cleaned every few shots or so. The invention of smokeless powders in the late 1800s reduced the need for black powder, since smokeless powders burn cleaner and with more power than black powder. These days, the only users of black powder are those that wish to hunt with weapons similar to what their ancestors used.
Posted by The Editor at 10:36 PM