In the previous two posts, we looked into the history and development of damascus barrels throughout the world. Now we will look at some samples of such weapons. Before reading this post, it might be worthwhile to read through the previous post to understand how these barrels were manufactured.
Single Iron or Single Stripe Damascus 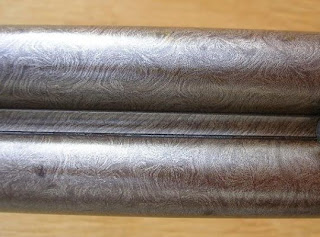 The first example we see above is a double barreled gun made of what is called "single iron stub damascus" which was used for the cheapest damascus barrels. In this type, a single twisted rod is flattened into a ribbon which is twisted around in a spiral form into one barrel. Two separate single barrels were made this way and welded together to make a double barreled gun. As you can see, the pattern has swirly lines, but is not as regular as some of the following examples. The raw materials used to make this rod came from old horse-shoe nails, broken files and coach springs.
Two Iron or Two Stripe Damascus 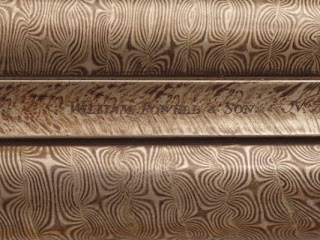 In the above example, we see a double barreled shotgun made with what is called a "two-iron damascus" type. In this type, two twisted rods, each one twisting in a different direction, are taken and rolled into a single ribbon, which is then wound in a spiral form into a single barrel. Two such single barrels were made and then welded together at the center to form the double barreled gun. Notice the rich patterning of each barrel in the above picture and compare it with the single-iron damascus type.
Three Iron Damascus or English Damascus 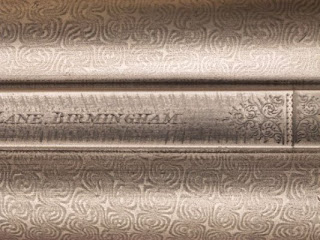 The above double barreled weapon is a three-iron damascus, otherwise known as an English damascus. This one uses three twisted rods which are combined into a single ribbon, which is then wound in a spiral form to make a barrel. Note the fineness and richness in patterning compared to the ones above. This type was used for the finest English sporting guns.
Laminated Steel and Silver Steel Damascus 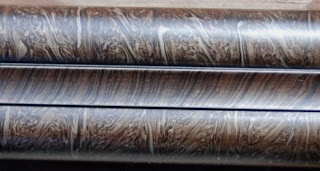 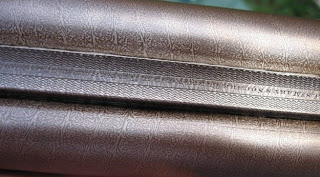 In the above two images, we see fine examples of laminated steel damascus and silver-steel damascus. As with the three-iron damascus, these are made with three twisted rods, but the difference is the composition of the materials used to make the rods. These two use a higher percentage of steel and a better quality of iron to make the rods. Also, in laminated steel damascus, the iron and steel plates are piled in a different order before being combined, which gives the patterns a different shape than the other examples.
Six Stripe Damascus 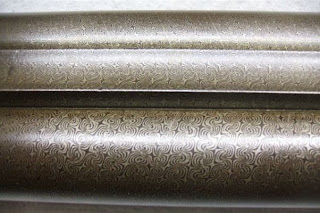 As mentioned in our previous post, the English did not often make ribbons using more than three twisted rods, as they determined that the pattern was fine enough and that the pattern was not significantly improved by using more twisted rods. The Belgians on the other hand, used to manufacture some barrels using six twisted rods, each of which was twisted much more than the English manufacturers (They would use 18 turns per inch, whereas no English manufacturer would exceed 8 turns per inch, when twisting the rods). This gave it a beautiful finish, but it wasn't as strong as English barrels, because the excessive twisting actually weakened the barrels a bit. An example of a six-stripe Belgian made barrel is above.
Posted by The Editor at 3:30 PM