We've seen in our previous post that with the rise of smokeless powders replacing the old black gunpowder, steel barrels became more popular as these could withstand the higher pressures generated by smokeless powders. We will now study some of the processes involved in making a modern steel barrel.

Steel is used obviously, otherwise we wouldn't be discussing it in this chapter :). The steel used has to be able to withstand high pressures of over 50,000 psi (340,000 kpa) and special steels are needed to do this. There are two types of steel generally used in modern barrels:

The first type is an Chrome-Molybdenum steel alloy (called chrome-moly for short). This is the same steel alloy that is used to make truck axles, connecting rods and propeller shafts. In the US, such steels are designated by grades such as AISI 4140, AISI 4150, AISI 4340 and so on. The British equivalent of these steels is EN 19, EN 24 etc. These steels are generally used for military grade firearms as well as hunting rifles.

Whatever the type of steel chosen, the most important characteristics of the steel are ease of machining, longevity and strength. Secondary considerations are resistance to corrosion and ability to be blued.

It is important for these steels to have high tensile strength (i.e.) resistance to being pulled apart. These steels can easily withstand over 100,000 psi which is quite a bit over the maximum expected pressure. Hardening steels generally increases tensile strength, but it tends to make them brittle and susceptible to hard knocks, hence these steels must withstand shock as well. A tradeoff is made between tensile strength and impact strength and therefore, the barrels are hardened to between 25 and 32 on the Rockwell C hardness scale.

The steel for the barrels is generally not made by the barrel makers themselves, but instead arrives from external vendors in lengths of 5 - 7.5 meter (16.5 - 24.5 feet) long cylindrical bars and diameter depending on the barrel makers specifications. For instance, barrels intended for hunting rifles have a diameter of 3.25 cm. (1.4 inches) and barrels for smaller .22 rifles may be 2.5 cm. (1 inch) in diameter. The external vendor generally stress-relieves the steel bars before delivery. This is done by heating the bars to 525 - 550 degrees centigrade (977 - 1022 degrees fahrenheit) and then allowing the bars to cool slowly. If the bars are not stress-relieved before hand, they may split during the machining process.

The first step of the process is to cut the bars to the required length of gun barrels (e.g. 16 inches, 18 inches, 20 inches, or for metric speakers, 450 mm. or 500 mm. or whatever) and the ends are squared off. Then a hole must be drilled into the barrel.

Drilling Techniques
Everyone knows how to drill a hole into a wooden plank or wall, using a small hand-drill or power drill. Some may have seen or handled a drill press in a machine shop and used it to drill into a mild steel plate. Drilling a hole into a gun (especially rifle barrels) is a completely different proposition than drilling a hole into a wooden plank or a mild-steel plate. For one, a rifle barrel is a lot longer and the drill needs to penetrate deep into the barrel. The second problem is accuracy. For a gun barrel, it is critical that the drill does not deviate much from the center of the barrel, and this has to be true for the entire length of the barrel, which may be 40-50 cm. long or more. This means the ratio of diameter to length of the hole is unusually high for gun barrels. For example, an M-16 rifle barrel has a diameter of 5.56 mm. and a length of 508 mm. (20 inches), which means the ratio of length to diameter of this barrel is approximately 91:1.

The way to drill into a barrel is to use a special deep hole drill (also called a gun drill) and a special drill bit. First, we take a look at the drill bit used: 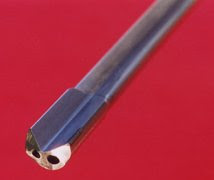 Now we look at the deep hole drilling machine that uses such a drill bit. 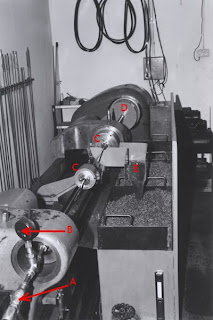 In this machine, you can see a pressure gauge B at the bottom end of the photo. The oil is pumped through the pipe A into the drill bit. The barrel blank to be drilled is mounted to the chuck D on the top part of the photo. The drill passes through a couple of guide bushes (C) before entering the barrel. The guides may be seen in the middle of the photo.

The barrel is usually initially pre-drilled to a few mm. depth before being mounted to this machine, to give the drill bit an initial starting hole.

Oil is pumped at high pressure from the end A seen at the bottom of the picture. You can see the dirty oil carrying metal shavings coming out of the channel E near one of the supporting guide bushes in the middle-right of the picture. This oil is passed through a series of filters to extract all the metal shavings and the oil is then recycled back into the main tank.

The drill bit is fed into the barrel at a slow rate of approximately one inch (2.5 cm.) per minute, so a 20-inch M-16 rifle barrel will take approximately 20 minutes to drill completely. The drill bit is initially held in the straight position by the guide bushes and prevented from moving side to side, but as it penetrates deeper into the barrel, the sides of the hole itself prevent the bit from moving around too much. Variations in the consistency of the barrel material can also cause the drill bit to wander a little. The barrel must also be straightened (or trued) before being mounted on the deep drill, because the barrel is rotated at high speed during the drilling process and any imbalance in the shape of the barrel will be magnified when it is spinning at such high speeds.

As we noted earlier, the drill bit is designed to cut a hole slightly smaller than the final diameter of the barrel. So if the desired final diameter is 5.56 mm., this process drills a hole that is 5.35 - 5.40 mm in diameter. The next process that we will study is used to enlarge the barrel to its final diameter.
Posted by The Editor at 12:01 AM