In our last post, we studied one physical property (density) that was used by people to judge black powder quality. Today we will study another technique that people used to judge the quality of black powder: the hygroscopic properties of powder.

The term "hygroscopy" refers to the phenomenon of certain substances attracting water molecules from the surrounding air and absorbing it. Examples include table salt, sugar, honey etc. This is why they are usually kept in sealed containers, otherwise they tend to absorb water from the atmosphere and spoil.

If the powder becomes damp, it may be restored by drying in the sun or in a dry, well-ventilated room. As a general rule, if the powder does not show an efflorescence of white crystals of saltpeter on its surface, it may be possible to dry it. Powder of smaller gravimetric density will absorb more moisture than a powder of a greater one, and a glazed powder will absorb less moisture than an unglazed one, all other things being equal. Powder that has become damp can be easily recognized by its unequal distribution of color and by the grains crushing more easily between the fingers. However, if it manages to absorb a large amount of moisture. the powder will form hard black lumps and if is reaches this state, the powder is generally useless and cannot be serviced.

To determine the moisture content of a sample of powder, a standard amount (usually 100 grains or 50 grams, depending on country) would be carefully weighed onto a glass plate. Then the glass plate would be placed in an oven and heated for a few hours at a specified temperature that depended upon the country (160 °F for England, 190 °F for Germany etc.) and then placed in a dessicator to cool for 20-30 minutes, after which they would weigh the sample again. The difference in weight is the amount of water absorbed by the powder sample.

To determine the tendency of a particular powder sample to absorb moisture, the powder sample was put alongside a sample of standard powder over a layer of water in a tub, which was closed air-tight and left for a period of time. The two powder samples would then be removed and the amount of water absorbed by each sample would be compared. This test would let people know how much their particular powder differed from the standard sample powder.

In the next few posts, we will look at some of the chemical properties that people would look at to judge powder quality.

Note: I trust my American readers had a happy Thanksgiving holiday so far. Your humble editor was temporarily hospitalized for a little while, but I recovered just in time to spend the holiday at home with family and friends, just as it should be :-).
Posted by The Editor at 10:14 PM No comments:

In our last post, we looked at some of the physical properties (color, grain solidity, grain size etc.) that powder manufacturers would look at, while determining if the black powder was good quality or not. In today's post, we will look at some more physical properties that they would check on.

One of the properties that they would check on was the density of the black powder. Readers may recall from their physics class that density is defined as:
density = mass / volume
(i.e.) we take a certain amount of substance, weigh it and measure its volume and determine its density that way. Different materials have different densities, so this is a quick way to determine if the  ingredients are in proper proportion with each other. This principle was famously illustrated by Archimedes, who was tasked by the King of Syracuse in Greece, with determining if his crown was of pure gold or if the goldsmith had cheated the King by mixing some other metals with the gold. Archimedes pondered on the problem and as legend has it, he was sitting in a public bath one day and saw the water overflow as he lowered his body into the tub. Then he realized he had found a solution to the problem and jumped out of the bath and ran home naked, all the while yelling "Eureka!" (Translation: "I've found it!"). He took a lump of pure gold, weighed it carefully, and then dumped it in a tub of water and measured how much volume of water was displaced, thereby finding out the density of pure gold (mass / volume). Then he took the crown, weighed it carefully, and then dumped it in water and measured the volume of water displaced and determined its density (again, mass / volume). From the difference in densities, he determined that the goldsmith had cheated the king, not only that, he could also tell how much gold the goldsmith had stolen and replaced with cheaper metal.

Similarly, measuring the density of black powder gives a good idea of the kinds of raw ingredients used, the mixture and the presence of any impurities. As far as black powder was concerned, it is a substance with grains, therefore there were three ways to measure its density:


Gravimetric density is the easiest to determine. It can be measured by weighing a quantity of powder that fills a certain space. However, due to variations in grain size and quality, this method doesn't give uniform results. Variations can also occur due to the shape of the measuring vessel, the height at which the powder is dropped into the vessel, size and shape of the grains and size of the filling hole. Therefore, comparisons of different samples are only meaningful if the same kinds of powder are measured using the same apparatus. 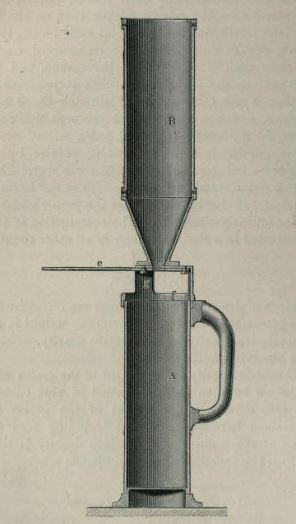 The above apparatus was used in many European countries in the 19th century. It consists of a measuring vessel (A), made of brass or copper, which is precisely calibrated to hold exactly 1 liter (1000 cubic centimeters or 61.02 cubic inches) of material. Above it is placed a funnel B, with a conical bottom and a hole of exactly 14 millimeters (55/64 inches). The height between the bottom of the funnel and the upper edge of the measuring vessel was exactly 40 millimeters (1-37/64 inches). A cut off plate, C, was placed at the bottom of the funnel, to regulate the flow of gunpowder. To determine the gravimetric density of powder, the vessel A was first emptied and weighed very accurately. Then it was placed under the funnel and powder allowed to fall into the vessel until the grains began to run off the edge of it. Then the funnel was closed and the powder was smoothed off with a brass plate and a few light blows were struck to make the powder grains settle a little, with the excess being removed with a soft brush. The vessel was then precisely weighed again. The difference between the two weighings is the weight of the powder contained in 1 liter, from which we can find the density. Since variations in grain size could affect the results somewhat, the experiment was repeated three times and the average was taken. Depending on the type of powder, different countries had different standards for densities of powder. E.g. Germany's standards were: rifle powder must be between 0.905 and 0.925, cannon powder between 0.915 and 0.935, large grained powder between 0.960 and 0.980, Austria's standard for large-grained powder had to be between .907 and .951, Switzerland had rifle powder between 0.955 and 0.975, while cannon powder was to be between 0.960 and 0.970, French standards had musket powder between 0.830 and 0.870, sporting powders at least 0.860 etc.

To measure the relative or absolute density, people generally used quite a few methods. One of them borrows the ideas of our old friend, Archimedes. They would first take a liquid that could not dissolve any of the ingredients of gunpowder. Pure distilled alcohol was often used for this purpose. They would put a certain amount of this alcohol in a glass measuring tube, calibrated in tenths of a cubic centimeter and allow it to settle for a few minutes. Then, they would accurately weigh a certain quantity of black powder and then drop it into the tube. Due to the added powder grains, the level of alcohol in the tube would rise. They would read the markings on the tube to measure the increase in volume and since they already knew the weight of the powder added, they could now determine density = mass / volume.

This method was later improved by scientists, such as Heeren, Timmerhans, Otto and others. One of the issues was that when the powder was immediately added to the tube, the level would rise at first and then drop, as air bubbles escaped from the tube due to the alcohol seeping into the air gaps between the powder grains. Therefore, the improvements were generally procedures like waiting for a certain period of time for the alcohol level to settle, heating the alcohol and using an air pump to pull out all the trapped air in the grains etc., to get a more accurate reading. 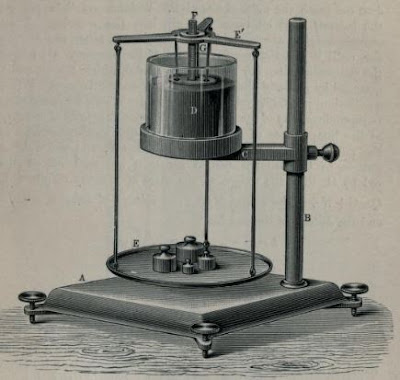 
These densimeters generally used vacuum pumps and mercury to accurately measure mass and volume of the powder grains and determine the absolute or real density of the powder.

As far as black powder was concerned, both gravimetric and real densities were measured to judge its quality. Since real density measures the density of the powder without the air in between the grains, it is possible for two powders made with the same proportion of ingredients but different grain sizes, to have the same real density and different gravimetric densities. Gravimetric density, on the other hand, depends on the size and shape of the grains, on the glazing process and percentage of dust in the powder. The gravimetric density has an influence on the rapidity of combustion, whereas the real density influences both the rate of combustion of a single grain of powder and the durability (keeping quality) of the powder during transport and use. Therefore, both densities were measured to properly judge the qualities of a powder.

Posted by The Editor at 7:20 PM No comments: