In our last post about combined firearms, two of the examples (the whip pistol and King Henry VIII's mace) are also examples of a concealed firearm. Well, technically, Henry VIII's mace is a weapon anyway, even though it conceals pistols within it. We also looked at derringer pistols earlier, which were designed to be concealed. In this post, we will look at some firearm designs that were designed to be hidden and give the illusion that the user had no means of self defense.
The first class of weapons we will look at is the firearm-cane class. Canes or walking sticks are often used by elderly people as a walking aid for hundreds of years. In the 19th and early 20th century, they were also seen as a fashion accessory that was popular with the gentlemanly class, whether young or old. For many centuries, people have concealed objects in canes. For example, there are stories of spies hiding messages in hollow walking sticks and an enterprising missionary to China smuggled silkworms to the west inside his hollow walking stick. Prince Edward, son of Queen Victoria, even commissioned a cane which had a hidden flask of whiskey within it, as well as a built-in hidden compass on the top of the cane knob, so that he could find his way home after a night of drinking! 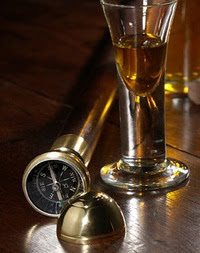 The Japanese had the Shikomizue and the Romans had the Dolon, both of which concealed swords within a hollow walking stick. In the 18th and 19th centuries, sword canes also became popular with the wealthy classes of Europe. In the 19th century, people soon began to conceal firearms within canes as well. Such weapons were made by many English and European manufacturers: 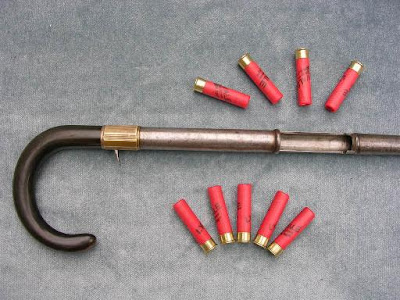 The above example fires .410 caliber shotgun shells. The trigger is a foldable one and may be kept hidden, when not in use. 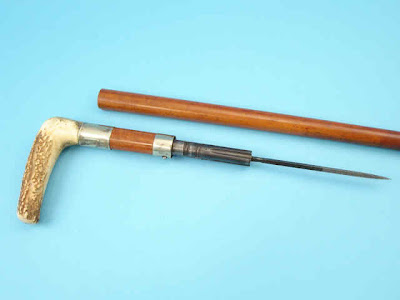 The above image is a cane made by Briggs of London in the 19th century. It conceals not only a sharp dagger, but also a 4-cylinder pepperbox revolver that fires .22 caliber ammunition.
These days, canes that contain concealed weapons are illegal in many countries, but some countries have a clause that they can be legally sold if they are over 100 years old. Therefore, older weapons are often seen in auctions.
The next weapon we will look at was invented by a Frenchman named Jacques Turbiaux in 1882. It was called a Palm Pistol: 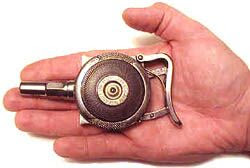 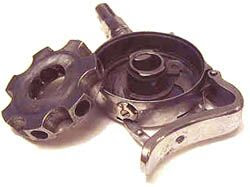 This is a weapon designed to be concealed within one's fist and can be fired by squeezing the spring loaded lever in the back of the gun. The cartridges are loaded in a rotating turret with the bullets facing outwards. There were two version, a 7 shot version using 8 mm. cartridges, like the image shown above, and a 10 shot version using 6 mm. cartridges. The lever has a double action operation, in that it rotates the turret to the next shot, before firing it. Turbiaux obtained an US patent in 1883 and the Minneapolis Firearms Company produced a licensed version that fired 7 shots in .32 caliber. These weapons are typically rare today and sell for about $1500-2000 dollars in auctions.
In modern days, people have sought to conceal firearms in various guises. The following three pictures are some examples that were developed by spy agencies of various countries: 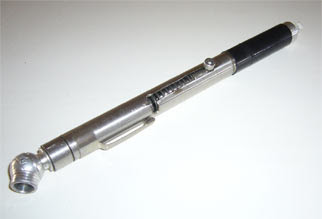 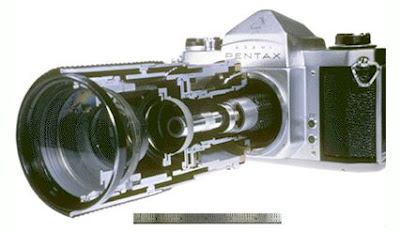 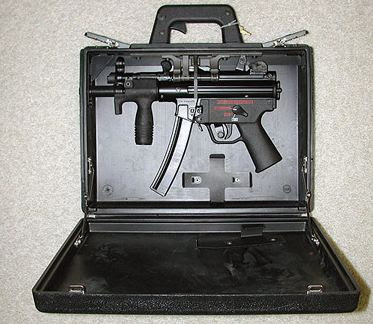 The first weapon is designed to look like a tire-gauge, but also fires a .22 caliber cartridge. It was supposedly used by CIA agents in the 1950s and 1960s. The next is a weapon designed to look like a camera, but carries a pistol within the lens. The third looks like a typical briefcase carried by a businessman, but hides a Hecker & Koch MP-5 submachine gun within it. It is fired by a hidden trigger concealed in the carrying handle of the briefcase.
Concealed weapons like these are illegal in most countries around the world, so the only concealed weapons these days are manufactured by intelligence agencies or custom built for criminals and are not available to the public. In fact, most of these designs are kept secret. Some countries allow certain concealed weapon items to be legally bought or sold if they can be classified as "antiques", so some historical items, such as pistol canes and palm pistols, are seen in auctions.
Posted by The Editor at 9:37 PM