In the early days of firearms history, some people would carry pistols mainly for self-defense and close range fighting. However, these people were often just a few within a group of armed men. The first dedicated unit carrying pistols were the German Reiters, who were a cavalry unit that carried pistols as part of their standard armament.
The word "Reiter" literally means "rider" or "horse rider" in German. The term is a contraction of "Schwarze Reiter" (literally "Black Rider"), which is what they were originally called, because of their distinctive black armor. These units were first formed in the 1530s or so and the first Reiter units that were deployed in offensive action were in 1554 in the Battle of Renty. At that time, there was no country named Germany, but there were various small states of German speaking people in Europe and the Reiter units were composed of mostly people from these small states. Such units not only served the German states, but also served as mercenaries in other armies such as Sweden, France, Netherlands, Poland, Russia etc.
Until the time of the Reiter units, most European cavalry consisted of knights equipped with a lance as a primary offensive weapon and a sword as a backup weapon. The lance is a very heavy weapon and consequently, it was cumbersome to use by a mounted man. The Reiters were the first units to replace the lance with firearms as the primary offensive weapons. An armed Reiter would carry at least two or more pistols and a sword. The pistols were single-shot muzzle-loading type weapons with either a snaphaunce or wheel lock firing mechanism. The snaphaunce mechanism was cheaper and was therefore more common, whereas wheel locks were used by people who were generally financially better off and could afford the more reliable devices. Some Reiters were also equipped with a carbine weapon. 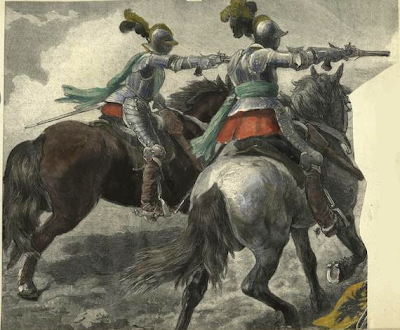 Public domain image. Click on image to enlarge.
The size of a typical Reiter squadron was about 300-350 horsemen. The tactic used by such a unit was to form into close blocks of riders of up to 10-20 ranks deep and charge towards a large body of enemy soldiers. As each rank would come into range with the enemy, they would all simultaneously turn the horses to one side, shoot the first pistol, then turn the horses to the other side, shoot the second pistol and then they would break off and ride to the rear of their formation, while the next rank would ride forward into firing range. Meanwhile the first rank would ride to the back of their formation, reload their pistols and then await their turn to ride forward into battle again. This meant that the unit as a whole could keep up a relatively continuous stream of fire. Once the enemy unit was sufficiently softened up, the Reiters could also charge in and use their swords at close range. The Reiter units were used against enemy infantry units mostly, as an enemy cavalry unit could easily break it up with a sudden counter-charge.

Typical pistol type used by a Reiter
In the above picture, we see an example of a pistol that was used by a Reiter. The above pistol is a muzzle loader with a more expensive wheel lock mechanism and also has some very decorative carvings on it, indicating that this is a superior quality weapon for its time. Also interesting is the ball at the end of this pistol butt. This ball serves multiple purposes. First, it serves as a counterweight to the heavy pistol barrel and therefore improves the balance of the pistol and makes it easier to aim. The second purpose is to improve the grip of the weapon and prevent the user's hand from accidentally sliding off the back and dropping it. Bear in mind that the armored cavalryman would typically wear heavy chain mail or plate gloves and having a ball at the end of the pistol butt made it easier to hold the pistol and draw it out of its holster. In addition, the user could also reverse the pistol and use the ball-butt in an emergency as a miniature club or mace and hit people on the head with it.
As more and more armies began to drop the lance and adopt firearms, Reiter units were no longer regarded as special cavalry units and were integrated as part of the generic cavalry in most armies. Later mounted troops were equipped with longer carbines instead of pistols. Based on the type of armor and equiment that they carried, such units were usually classified as Dragoons or Cuirassiers. Mounted cavalrymen carrying firearms lasted until World War I and these days, the surviving units serve in ceremonial roles alone.

There is also one more contribution that the Reiters made, which still exists in the present day. During a dressage competition, some horse riders execute an artistic movement called a "caracole", where they demonstrate their horse's training and ability to make a tight half turn either to the right or the left. This maneuver was originally invented by the Reiters and was the movement that they would execute right before they discharged their pistols!
Posted by The Editor at 9:54 PM