In our study of firearm bores, we noted that a weapon of bore N originally meant that it fired a solid spherical lead ball of such diameter that it weighed 1/N pounds. Therefore a 4 bore firearm fires lead balls that weigh 1/4 pounds each, an 8 bore firearm fires balls that weigh 1/8th pounds each and so on. Therefore, the larger the bore number, the smaller the ball it fires. We also talked about "elephant guns" which were generally 4 bore weapons and even the 2 bore weapon, which was infrequently used, because it was hard for a man to shoot from the shoulder. But what about larger weapons, such as the 1 bore. Well, they do exist and they're called punt guns. 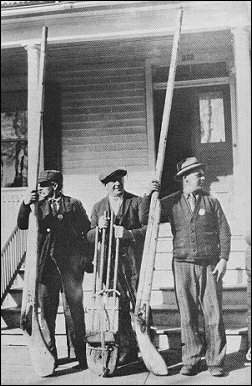 The history of such guns starts in the 19th century, when the rise in demand for meat in the marketplace led to mass-hunting of waterfowl. Also, the best women's fashions at that time featured feathered hats and feather trimmed dresses and therefore there was a large demand for feathers as well. To meet these demands, professional hunters began to custom-build larger caliber weapons for the task. The punt gun emerged during this period as a commercial way to hunt waterfowl. A punt gun is essentially a large caliber shotgun. Since they have huge barrel diameters (around 2 inches or 50 mm.), they are capable of firing over 1 pound (approx. 0.5 kg.) of shotgun pellets at a time. Since such a weapon cannot be really held at the shoulder by normal human beings because of the huge weight and immense recoil, they were often fixed to the boats used for hunting. These boats were called punts (a flat-bottomed boat with a square bow designed for shallow water usage) and designed to maneuver around shallow swamps and marshes where water birds would generally feed. This practice of attaching the gun to the punt is what gave the punt gun its name. The hunter would simply mount the punt gun facing forward and maneuver the boat to point to the whole flock of birds without startling them. If multiple hunters were present, they would all move their boats in a parallel line facing the flock of birds. Then, at a given signal, the punt guns would all open fire simultaneously. The recoil of a punt gun was so much that it would often push the punt backwards by several inches. 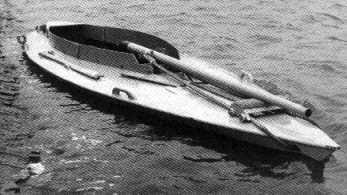 Since the punt guns generally fired a large amount of shotgun pellets, one of these could easily account for something like 50 birds with just one trigger pull. To increase their hunting efficiency, groups of professional hunters would often maneuver 8-10 punts into position and fire at a flock simultaneously, accounting for the entire flock at one time. In fact, punt guns were so successful in hunting that they depleted wild bird populations and were eventually banned in many US states by the 1860s. Later on, the US federal government passed a law in 1918 banning the practice of market hunting completely, as well as the fashion feather trade by 1920. Hence, the use of punt guns in the US plummeted soon after. There are still a few hunters in the UK using punt guns in the 21st century, but they are limited by law to a barrel diameter of 44 mm. and max. shot weight of 1.125 pounds.

Note the effects of just one shot from a punt gun. The reader can only imagine its effect on a flock of birds.

Due to the fact that there was no support from the US firearms industry for the manufacture of punt guns, they were custom-built by professional hunters. This meant that many of these were crudely designed, but they were usually very sturdily built. Many of them were muzzle-loaders with a percussion cap or flintlock firing mechanism. Since these weapons were custom built, weight, height and length could vary widely. The weight could be anything from 20-45 kg. and length could be around 2-3 meters. There was better support for punt guns in the UK, where the punt guns were designed by sporting manufacturers and were of better quality than the home made designs available in the US.