In the early days of firearms history, there was no automatic reloading mechanism for firearms, so once the firearm was discharged, the time taken to reload a firearm was pretty high. During this time, the user of the firearm was at great risk of a counter-attack unless he had some other weapon to defend himself. With this view, there were several weapons developed that would combine a firearm with some other weapon. Unlike a rifle with a bayonet attached, these weapons were primarily designed as axes, swords, daggers etc., but had a pistol attached.
The first class of weapons that we will study are the pistol-battle axes. These first appeared in Europe in the late 1400s and still continued to be used into the 1800s in some parts of the world.

Public Domain Image taken from W.W. Greener's The Gun and its Development, Second Edition
The weapon in the illustration above is a pistol-axe made in Germany in the beginning of the 17th century. The reader may note that this weapon has a wheel-lock firing mechanism near the head of the axe. The barrel is six inches long and fires out of the top of the axe. The handle behind the wheel-lock is about 2.5 feet long and has the trigger mechanism at the end of the handle. This weapon was designed to be used by a horseback rider.

Click on image to enlarge
The above illustrations show two more fine German made pistol-axes, from the Dresden museum. As before, these use a wheel-lock firing mechanism as well. The triggers for these two axes are located just below the wheel-locks. The axe heads have a blade edge on one side for cutting and a ice-pick like spiked point on the other side to pierce through tough plate armor. The top spikes of the axes are removable to reveal the hollow barrels inside. Note that these two axes are much more expensive and have better workmanship than the previous one and also have intricate engravings on the body of the axes.

Click on images to enlarge
The next two illustrations are an axe using matchlock firing mechanism and another one using the flintlock firing mechanism. This particular flintlock axe was made in Germany in the late 17th century. Flintlock axes were also heavily used by the Polish Cavalry between the 16th and 18th centuries and was one of their trademark weapons. 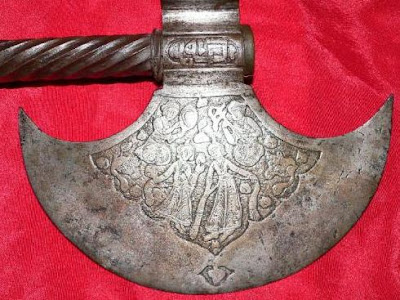 Indian made battle axe. Click images to enlarge
The above illustrations are an Indian made Tabar axe from the 17th century. This one uses a matchlock firing mechanism as well. There is no real trigger, as the matchlock is mounted on a long thin lever around a pivot point, as can be seen in the first illustration. The fire is applied by simply pulling the other end of the long thin lever. This axe is an all-steel construction and originally had gold inlay, most of which is worn off. Judging by the carvings on the axe head, this was probably owned by a Hindu, since at least four human figures are depicted.

Indian made battle axe. Click to enlarge
The next illustration is a weapon dating from the 19th century. This is a pistol axe taken from the Santal tribe of India. The Santals are a tribe that traditionally occupied areas of the modern day Indian states of Bihar, West Bengal, Orissa and Assam. This particular weapon is 16.5 inches (approx. 42 cm.) long, of which 8.5 inches (21.6 cm.) is the pistol barrel. It is a very light weapon and the thickness of the barrel at the muzzle is only 0.2 inches (approx. 0.5 cm.).
Axes were the most common weapons to be combined with pistols, since these two were the easiest to combine together. These designs were very widespread indeed. In the next few posts, we will see other weapons that were combined with pistols.
Posted by The Editor at 11:58 PM