In our last post, we studied the combination of a firearm with a sword. In this post, we will look into a relative of the sword, the dagger, which was also combined with firearms throughout history.
The combination of a firearm with a dagger was more common than combining a firearm with a sword. For one thing, they were cheaper. Also, unlike a sword, a dagger wouldn't be unbalanced as much and the firearm is also easier to manipulate and aim than if it was attached to a sword. As with swords, many of the early combined dagger pistols were made in Germany.

Image taken from W.W. Greener's The Gun and its Development, Second Edition. Click image to enlarge.
In the above image, we have a fine 16th century pistol dagger. This specimen uses a wheel lock mechanism. Note that unlike the pistol swords we saw in the previous post, this one has the barrel pass through the middle of the blade, thereby giving it better balance. The removable muzzle stopper piece is seen at the right bottom of the image. The muzzle stopper is removed to load the weapon and when replaced, forms the point of the dagger blade. The weapon is fired by depressing a small stud in the handle. The weapon is also beautifully ornamented, indicating that it was made for a rich customer.
In 1838, the United States Navy commissioned the Elgin Cutlass pistol, which is the only combination firearm ever to be officially accepted as a standard weapon by a military anywhere in the world. This combined a percussion lock pistol with a 11.5 inch long bowie knife. 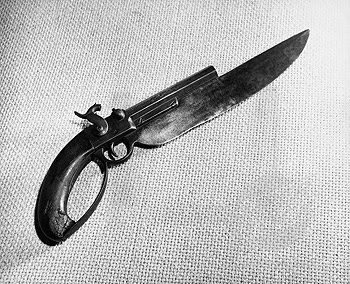 This weapon was not only the first combination firearm officially accepted in military service, it was also the first percussion lock weapon adopted by the US navy. They were originally designed for use with the Navy South Sea Expedition. This is a .54 caliber weapon with a 11.5 inch blade. It had some success, especially in a battle in the Fijian islands in 1840. However, only 150 of these specimens were ever made. A few were used in the Civil war, but were unpopular with the troops. Some of them made it to civilian hands and were used in the Wild West. 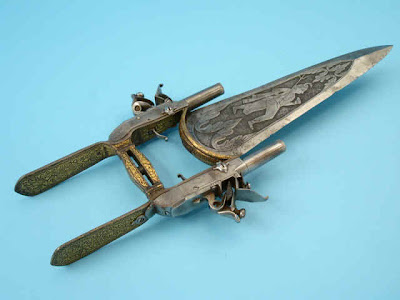 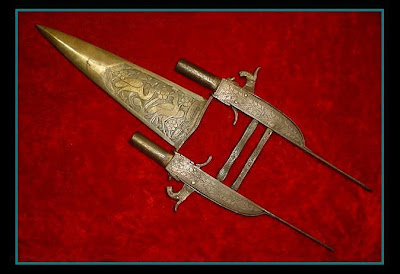 Click on images to enlarge.
The above two weapons are Katar knives from India, circa the 18th or 19th centuries. Both weapons feature two firearms attached to them. In the first picture, we have two flintlock pistols, one on each side of the blade. The heavy blade has an engraving of the Hindu Dieties Shiva on one side and Kali on the other. The blade is made of the best pattern welded steel and the handles and sides have floral patterns that are inlaid with gold. The second Katar has two percussion lock pistols, one on each side of the blade. Like the first one, this is also heavily engraved. One side of the blade has a scene with two cranes and the other side has two elephants charging at each other. The blades are designed to be used as thrusting as well as slashing weapons and could easily go through mail or even plate armor.
In all the above weapons, they all feature single-shot pistols. After the advent of revolvers in the mid 1800s, some weapons began to incorporate revolver technology along with daggers. 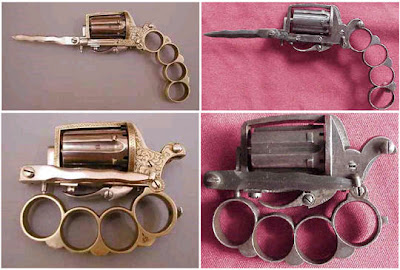 The above images feature two examples of a type of weapon called the "Apache Revolver". This is a weapon that was produced in the late 19th to early 20th centuries (about 1870 to 1918). Most of these weapons were produced by French or Belgian (especially around the town of Liege) manufacturers, such as N. Dolne and J. Deleaxhe. The reason for its name is because it became famous as the sidearm of a notorious Paris based gang of criminals called Les Apaches. This distinctive weapon consists of a pepperbox revolver using pinfire cartridge technology, coupled with a knuckle duster (a.k.a. brass knuckles) and a wavy blade. The blade, the knuckle duster and the trigger are all foldable. Folded up, it measures only 11 cm. in length and can easily be carried in a pocket. When it is unfolded, it expands upto 20 cm. in length. The whole weapon weighs about 380-400 grams. It was generally carried with the first chamber unloaded, so that it could not be accidentally fired while it was still in the user's pocket. The user could put his fingers into the finger holes of the brass knuckles and punch someone with it, without unfolding it. Alternatively, the user could unfold it and use the brass knuckles as the handle and either shoot the revolver or stab the enemy with the blade. The firearm part was definitely underpowered and inaccurate and the blade was only a couple of inches long, nevertheless it was used quite a bit in the Paris underworld. Note that the sample on the left is heavily engraved. Quite a few gangsters had this done to show off their weapons and such weapons may actually be the first examples of "gangsta bling"! These weapons continued to be used in the 20th century. One example of a combination brass knuckles and pistol, called the Le Poilu, was manufactured by the French during World War I. 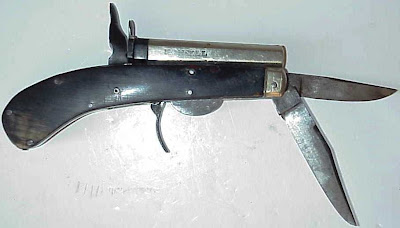 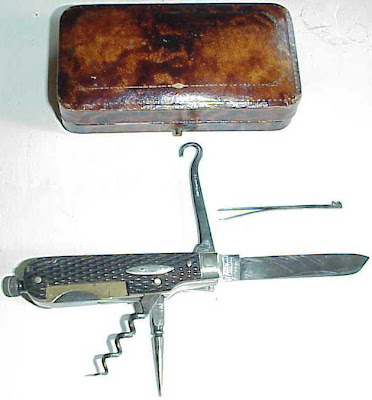 The next two examples are the sort of weapons that were designed along the principle of Swiss army knives. Both are dated to the 1860s and are both made by different firms in Sheffield, England. The first one is made by the firm of Unwin and Rogers and combines a pistol with two folding blades. The pistol is in .28 caliber and uses a rimfire cartridge. Unwin and Rogers received their patent in 1861 and made these weapons in many other calibers as well, such as .32, .34 etc.
The second one is made by another Sheffield firm called R. Turner & Co. This one uses a percussion cap and is in 0.22 caliber. It also contains a knife, corkscrew, hole punch, hook and tweezers. The cylindrical knob at the left side of the body is the cocking lever and is pulled out to cock the weapon. The picture below shows the other side of this weapon

The user would remove the barrel and breech and load the weapon and put the percussion cap in the end of the breech nipple. The user would then pull the cocking knob at the back of the weapon. On firing the weapon, the breech and barrel would also leave the weapon as a secondary projectile.
In the next post, we will cover some other combinations of firearms with other weapons.
Posted by The Editor at 9:32 PM