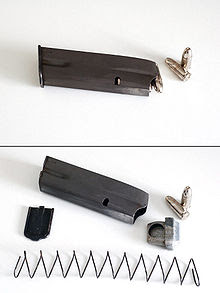 After the magazine is loaded, it is slid into the handgrip of the magazine and then the slide is manipulated to chamber the first cartridge into the firing chamber.

There are different types of pistol actions (similar to what we already studied about revolver basics). In the single action type, the hammer needs to be initially cocked manually. This is usually done on most pistols by pulling the slide backwards, which also pulls the hammer back and cocks it. On some pistols with external hammers, such as the M1911, the pistol can not only be cocked by pulling back the slide, but it can also be cocked by pulling the hammer back separately. 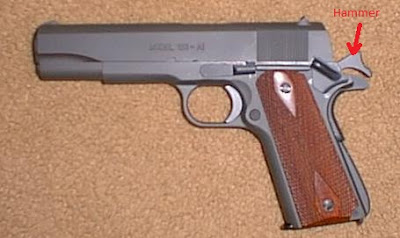 Pulling on the trigger then releases the hammer, which strikes the firing pin and detonates the cartridge. The bullet is fired out of the front of the barrel. Meanwhile, the action of the pistol extracts the old cartridge and pushes the slide backwards, which cocks the hammer again. The old cartridge is ejected via a port on the side of the slide and the new cartridge is pulled from the magazine and shoved into the firing chamber and the pistol is now ready to fire again.
In a double action pistol, pulling back on the trigger cocks and releases the hammer in the same motion. In some double actions, the pistol is double-action only (DAO) and there are some where the pistol can either work in single action or double action mode (DA/SA type). In this type, the hammer can be cocked manually and then released by the trigger, or pulling the trigger cocks and releases in the same action.

The first semi-automatic pistol adopted into service was the Hugo Borchardt designed C-93, which was shortly followed by the Mauser C-96. The US military adopted the John Browning designed .45 caliber Colt M1911 (which was adopted into service in 1911, hence the name). The M1911 remained in mainstream US military service for over 70 years and is still used by some Special Forces and Marine Corps units. Most of the world's other military forces started to switch back from revolvers to pistols after World War II, followed by police and civilians as well.
These days, modern semi-automatic pistols come in a variety of calibers and sizes, with a wide variety of options.
Posted by The Editor at 5:50 PM