In the history of firearms, there is a particularly interesting type called the Highland Pistol or the Scottish Pistol. We will discuss it here in this post.

These pistols were all single-shot type with a flintlock firing mechanism. Note the all-metal construction of this pistol, the lack of a guard around the trigger and the unique shape of the butt of this pistol. These are all distinguishing features of Highland pistols.

Pistols of this type originated in Scotland, specifically around the village of Doune in Stirlingshire county, which became a hot-spot for pistol manufacture in Scotland. Doune was originally a small village near the city of Stirling, which was once the capital of Scotland. In those days, Doune was located at an intersection of roads used by cattle herders to take their cattle from the Highlands to Stirling and other major cities, and many Highlanders would buy their goods in Doune on their way back to the homes. Firearms, mostly made by continental manufacturers, were some of the items available in the Doune markets.

Then, in 1647, a refugee Flemish blacksmith named Thomas Caddell settled in Doune, by way of the village of Muthill in Strathearn district of Scotland. While he was originally a blacksmith by trade, he soon began to make pistols as well and his art reached such a level of proficiency that he became famous in Scotland. These pistols used flintlock firing mechanisms, similar to those made by other manufacturers at that time. However, these weapons had certain features that made them completely different from weapons made anywhere else:
Even though Caddell's pistols were more expensive than his competitors, their quality and reputation for reliability was so high that Highlanders saved up to buy his products over other foreign manufacturers.

The factory founded by Thomas Caddell became a family business, carried on by five generations of this family (interestingly enough, the founder's son, grandson and great-grandson were all named Thomas Caddell as well!). Other pistol factories were also opened up in the area, many founded by people who had served as apprentices at the Caddell factory, such as Murdoch, Christie, Campbell, Macleod etc. Some of the pistols manufactured by these factories were heavily ornamented with elaborate engravings and inlays made of gold and silver and cost over 50 guineas and were proudly carried by nobility.

Click on images to enlarge. The last two images are pistols made of blued steel with silver and gold inlays.

Pistols like these were highly sought after, especially by Highland officers in the 1730s and 1740s. Later pistols were even made of other materials such as brass or bronze. 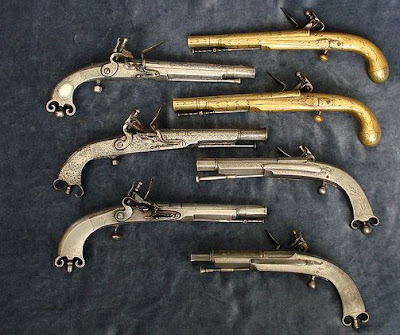 Click on image to enlarge. Pistols made by various manufacturers such as Campbell, Murdoch, Caddell, Macleod.

Pistols like these were used by Highland regiments in the 1700s. Allegedly, a pistol made in Doune was the first weapon fired in the American war of Independence (i.e.) the weapon that fired the shot heard around the world, was fired by Major Pitcairn, a British soldier. George Washington was also presented with two Doune made pistols by his staff, which he bequeathed after his death to Major-General Lafayette.

Highland pistols soon started to be manufactured by makers in England as well. Many of the pistols used by the 42nd Highland regiment (the famous "Black Watch" regiment) during the French and Indian wars were actually manufactured by a Birmingham maker named Issac Bissell.

By around 1795, many Highland regiments had largely abandoned pistols. Due to competition from other European manufacturers, the factories in Doune had also closed by the early 1800s, as it was no longer economical to produce them there. The buildings for the original Caddell and Murdoch factories still exist in Doune, but they are preserved as historical buildings and no manufacturing happens there these days. However, many high quality replicas of Highland pistols are still being manufactured in other countries. 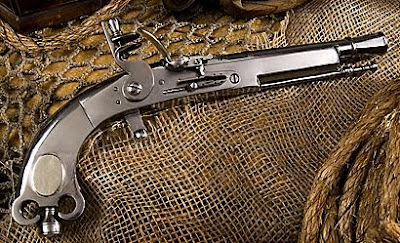 The above fine example is not made in Scotland, but in India! In fact, India is one of the major sources of replica Highland pistols these days.
Posted by The Editor at 10:59 PM